I don’t know about you, but I have never felt any love for dark elves in any setting I ever played a game in. The same applies to the WHFB figures for dark elves, I’ve never seen anything I really like. They always felt a bit daft and contrived. So – what to do with the handful of dark elves I’ve happened to collect over the last few years? Well, I had Mengil Manhide’s regiment of renown painted up for me by Pil. While enough to run a warband in SOBH, they’re a rather homogenous lot. I figured they could use some bolstering by another batch. So I scooped up all my remaining dark elves and shipped them off to JollyBob (from LAF/Frothers/etc) for painting. 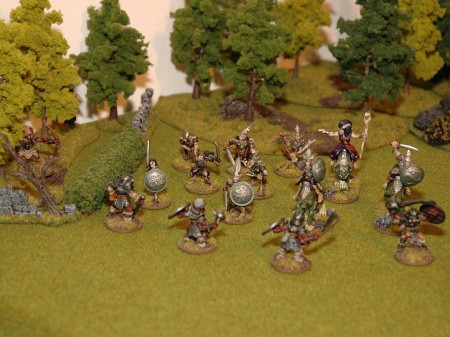 The orcs soon realized they were biting off more than they could chew.

He did a great job, but I’m not sure they’ll see much table time. This post have been prepared for almost a year but I haven’t been able to post it as I could not, for the life of me, come up with any fluff and background. Especially the names caused me problems. I think  it all boils down to how humourless and bleak the Warhammer fluff for dark elves is. They’re like the dark, brooding and pretentious teenagers of the Old World.

In large, these are the remnants of a raiding party that set out from Naggaroth, consisting of two ships. After looting and pillaging successfully eastward through the northern parts of the Empire, they ran into stiff competition near the Northern Wastes and the coven was decimated by a much larger chaos regiment. 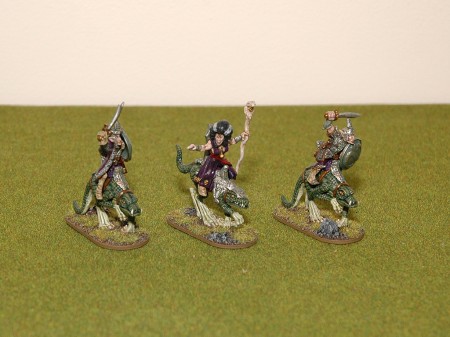 The matriarch  of the coven, Lidygia, flanked by her body guard. The two body guards are C21 Cold One Riders, by Naismith. Ligydia is a more modern (and not very likeable) Marauder MM74 Dark Elf Sorceress. Probably sculpted by Aly Morrison. The cold ones follow the same pattern, left and right are C21 Snarlers while the centre one is an MM74 cold one. 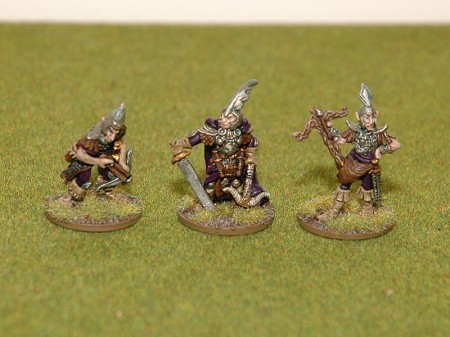 The three scouts, with captain Hoex in the middle. The two scouts are C09 Dark Elves by Bob Naismith, 1985 or 1986 releases. Captain Hoex is the (evil) dark elf captain from the BC2 Monster Starter Set. 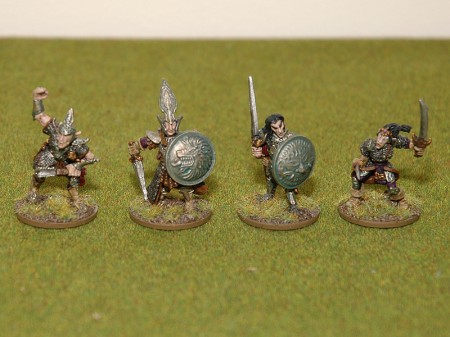 Captain Neviro second from the left, with his aide to the left and to the right his son Malus and daughter Debelia. All of them C09 Dark Elves by Bob Naismith, anno 1986 (except for the captain who is an earlier release, from 1985).

The two ship’s captains blame each other for the fatal defeat, while Lidygia takes perverse pleasure in playing the two against each other skillfully manipulating their passion for her and their rivalry. They realize they need to stay together to reach the shores where their ships lie berthed, thus they reluctantly cooperate. Before they reach their ships, blood will certainly be spilled.