One of my favourite sculptors is Bob Olley. I really disliked his style when I was younger, in the early 90s. The cartoony and exaggerated anatomy of the Blood Bowl ogres, coupled with the rather stiff manequin posing didn’t appeal to me at all at the time. I still think his sculpts are pretty goofy, especially the Essex ones and those (mostly) horrible Black Orcs he did for Citadel – but there are some absolute gems in there too. For instance, his Iron Claw goblins or the aforementioned Blood Bowl ogres. Also, his newer stuff is brilliant – especially the little Splintered Lands anthropomorphic animals. 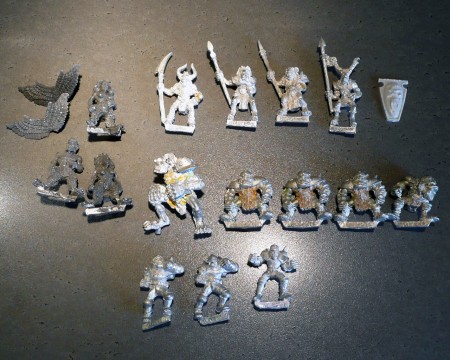 Among the gems are also his Citadel beastmen from the late 80s. I’ve got a few, and when I stumbled over a virtual Olley gold mine on eBay I couldn’t help myself and bought even more. The same seller also had the set of harpies for sale, as well as the rather rare and elusive Blood Bowl Troll #3. They’re all mine now!

I’ve also been getting some more Blood Bowl stuff for my Dungeon Bowl project. Four orcs and three humans.

Last week I didn’t post what I had been getting (mostly) – I suppose easter got in the way. Here’s the picture I took though. It’s a parcel from Alternative Armies, containing Jes Goodwin’s old barbarians and some lesser goblins by Kev Adams.

Haha, my parcel is hilariously squashed! Such fun! 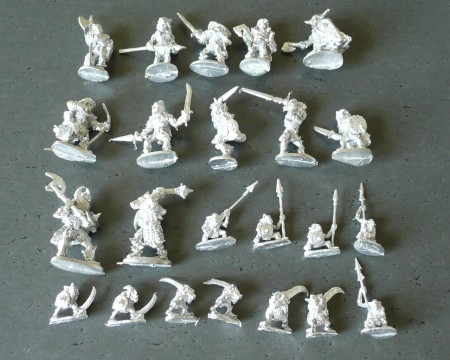 The lead was ok though!

Luckily the chaps and/or chapettes over at Alternative Armies know how to pack their parcels so no lead was harmed. These guys were all bought on a whim. Alternative had 20% off, and I had been eyeing the old barbarians by Jes Goodwin for some time. It’s a neat little set, with nicely sculpted minis that when painted as a group will make up a great warband for Song of Blades, Skulldred or Brink of Battle – whatever I will go for in the end. The lesser goblins were a super impulse buy. I sort of regret it, as they’re really small and I’m sure I won’t paint them any time soon. Also, those spears are very fragile. They’ll make nice snotlings for dungeon crawling though. The barbarians will go out on commission if I can find a painter willing to do them for a good price.

These weren’t the only additions though. I also got two pre-slotta pirates from the Citadel rogues line. Forgot to take a photo of them, so I’ll just include them in my every-growing negative lead tally. Total tally for 2012 is now 44 painted – 154 acquired = -110! Yikes.

2 Responses to “This week I have mostly been getting… Olley stuff!”