CAMPAIGN BACKGROUND
In The Riding, a small backwater province in The Old World, lies a small town named Stillburg. Situated north of Averridge and surrounded by dark forests, life has never been easy nor much fun in Stillburg. Recently, this has taken a turn for the worse. Livestock have been found mutilated and torn asunder, and several supply convoys from the south have gone missing.

At first people blamed the wolves in the region, and wanted to organize a hunt. However, when a full pack of wolves was found torn to pieces the towns-folk started to get scared. Nobody talked about organizing any hunts after that. Instead, fortifications were made on the town borders and mercenaries were recruited to bolster the town’s small militia.

Among these mercenaries, we find Raab the Barbarian and his old friend and partner Aldor Berlepsch.

SCENARIO 1 – Stirrings in the burial grounds
A few uneventful days after their enlistment, Raab and Aldor were spending the afternoon listening to yet another speech by the mayor. A sudden commotion in the north end of the square brought a premature (and appreciated) end to the speech. It was old farmer Crabcock, screaming at the top of his lungs that ”they got him”.

The mayor and a cleric from the priory of Gadd rushed to the old man’s side, and after a short but lively discussion mayor Boismann once again addressed the crowd. The farmer’s son had been assaulted and dragged off by walking corpses, into the woods to the north west of town. The mayor, seeing an opportunity to raise the generally low opinion of him and his bravery, proclaimed that he and the cleric would venture out to recover the young farmboy. At their side, they have three men from the militia and a heavily armed paladin of Gadd. They could however use some help…

Aldor and Raab decide to join, to make some quick coin and then get on with their travels north to Norsca where they plan to rejoin Raab’s brethren. How dangerous can a few reanimated skeletons be?

Setup
Woods and stone mounds, with one or two village houses near one corner of the board. The heroes are deployed within a short distance from the buildings. On the diagonally opposite quarter of the table, the (still living) body of Billy Crabcock is placed. The undead are deployed within a medium radius around him. 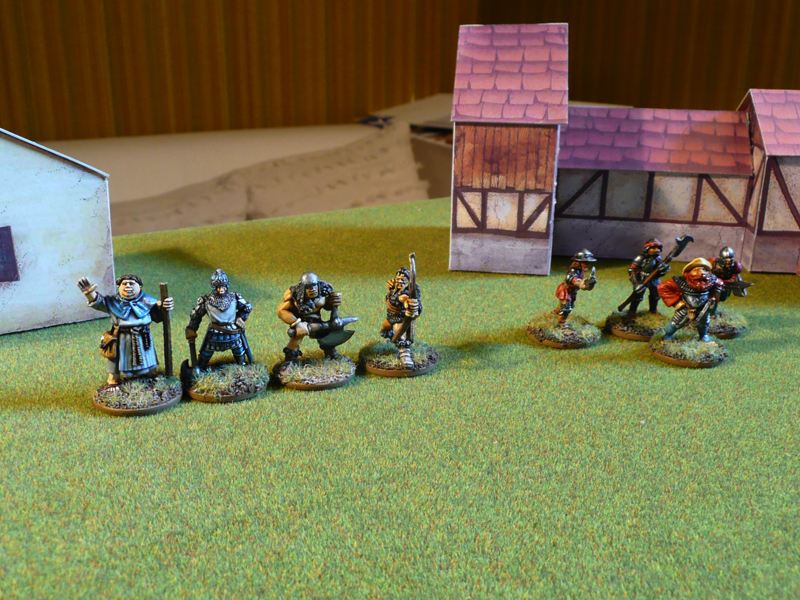 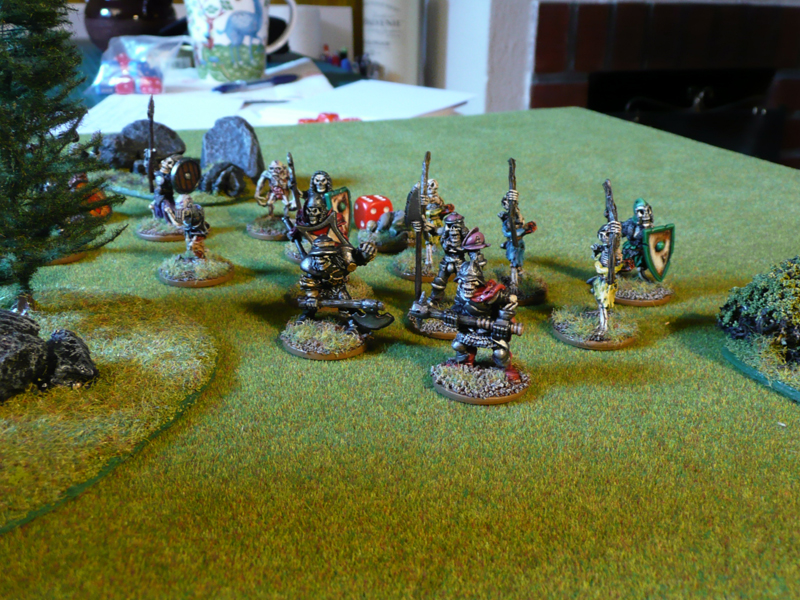 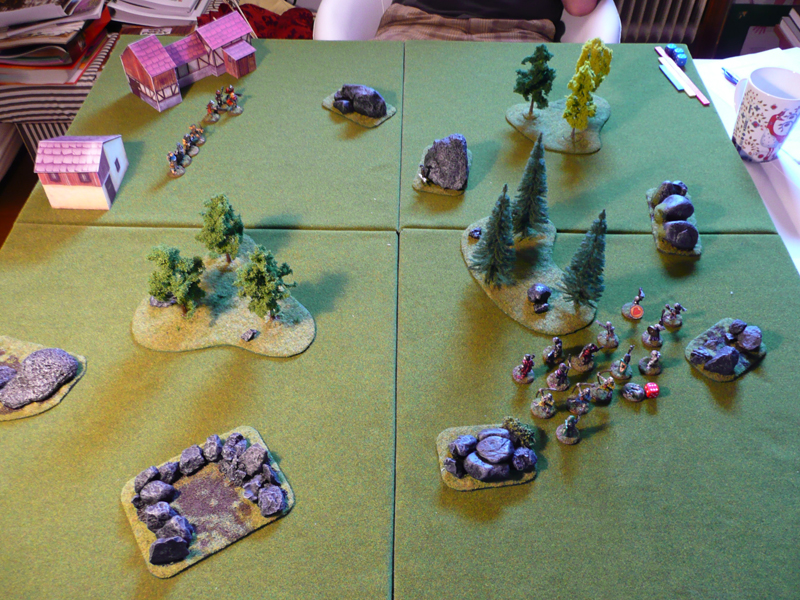 The heroes win initiative and activate first. They all move up the centre, with Raab and Aldor on point and the mayor with militia bravely protecting the rear. The undead breaks up in two groups; one larger group advancing towards the heroes while a small group of two skeletons and the three zombies advance on the right flank in cover of the woods. The three skeleton archers each take a shot at Raab, but at three times the distance it has no effect. 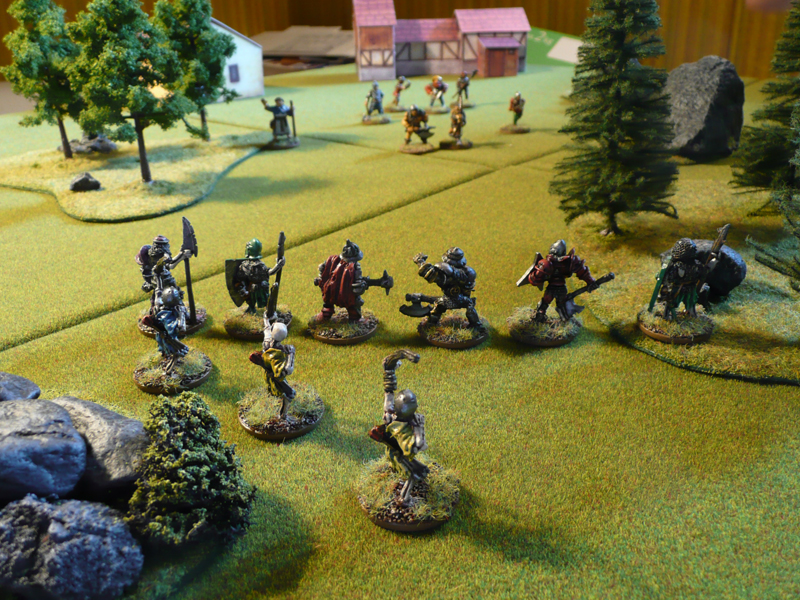 Aldor and Raab then move into the woods on the right flank, while brother Wendel and Duncan enters the woods on the left flank. The mayor, in a rare display of bravado, moves up the centre with only one militiaman as a shield to act as bait. All but one skeleton move up and form a line in front of the skeleton archers. All three archers shoot at Sven, the closest militia man, who falls on the last (aimed) shot. On the right flank, the zombies and two skeletons slowly advance. 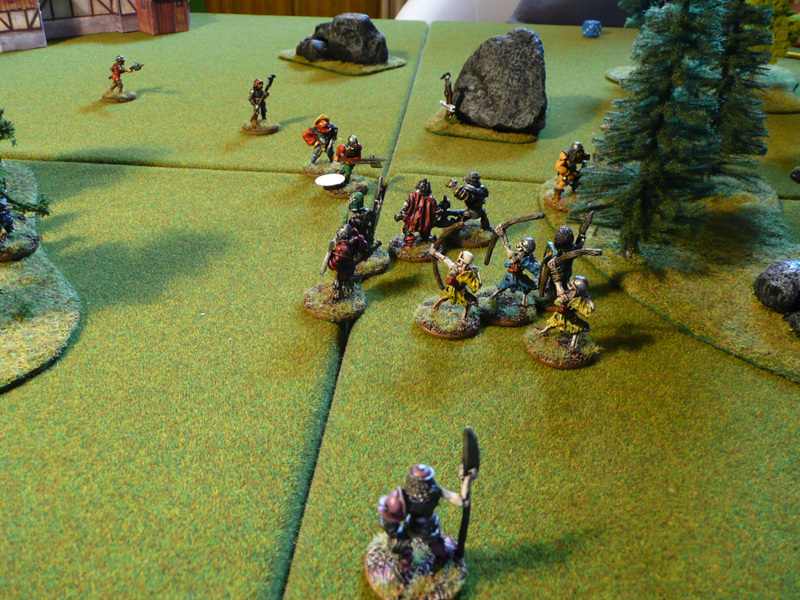 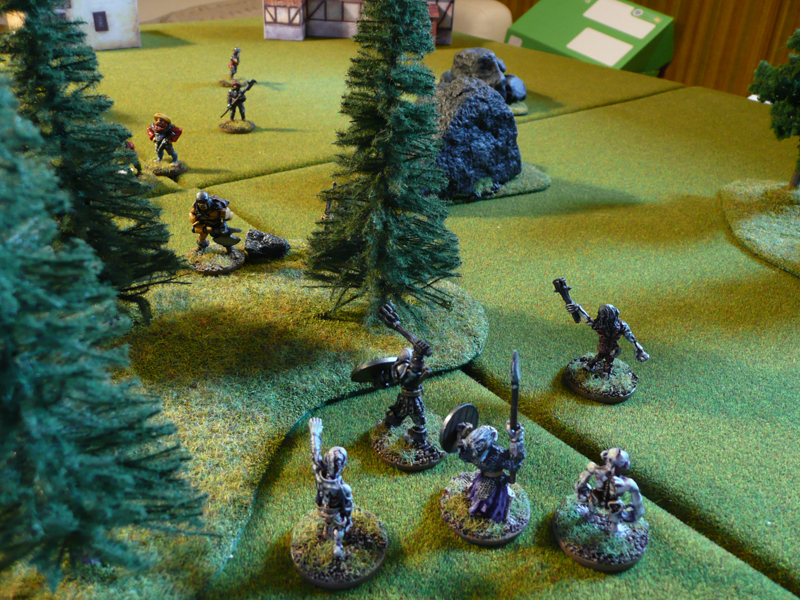 Sven recovers from the archers’ attack and stands up. Aldor is running unhindered through the woods with the goal to reach Billy as quick as possible. In a coordinated ambush the heroes break cover from the woods and attack! Duncan and brother Wendel leap out of the woods on the left side and attack two skeletons. Duncan manage to hit, but his opponent is only pushed back. Wendel on the other hand, scores a solid hit and destroys the vile skeleton with divine aid. In blind frenzy, Raab rushes out from the woods on the right, straight into a surrounding circle of skeletons with no actions left for attacks. The militia moves up to shield the mayor, who fires with his pistol over their shoulders but miss. 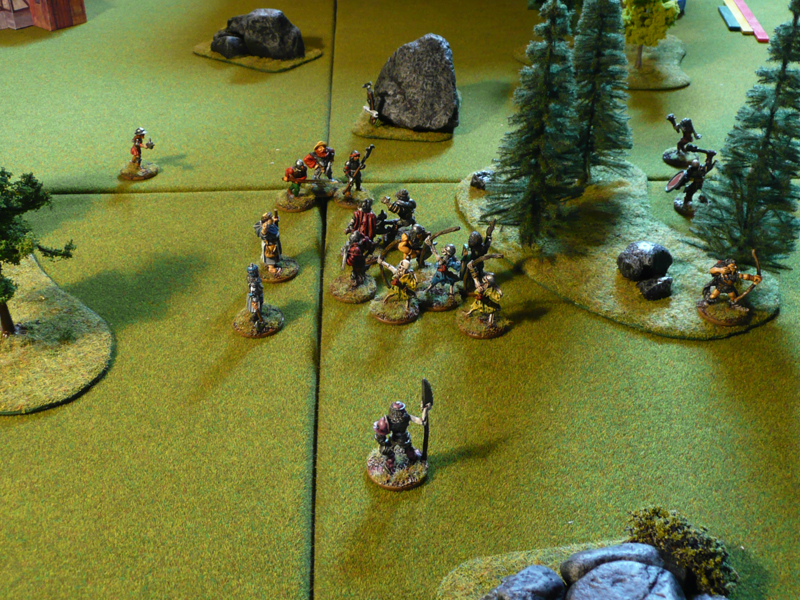 The trailing skeleton rushes up past Duncan to attack brother Wendel, but the attack is parried with ease and the cleric repays the attacker with a crushing (and quite holy) blow to the skull. Two skeletons near Raab gather around him and the barbarian realize his folly. Outnumbered three to one, a fourth skeleton moves in and with a precise blow the mighty barbarian is overpowered and falls. A fifth skeleton approaches the fallen warrior and finishes him off. The archers fire at brother Wendel, who falls when dodging the fussilade.
On the right flank, the skeletons rush through the woods while the zombies continue circling around it. 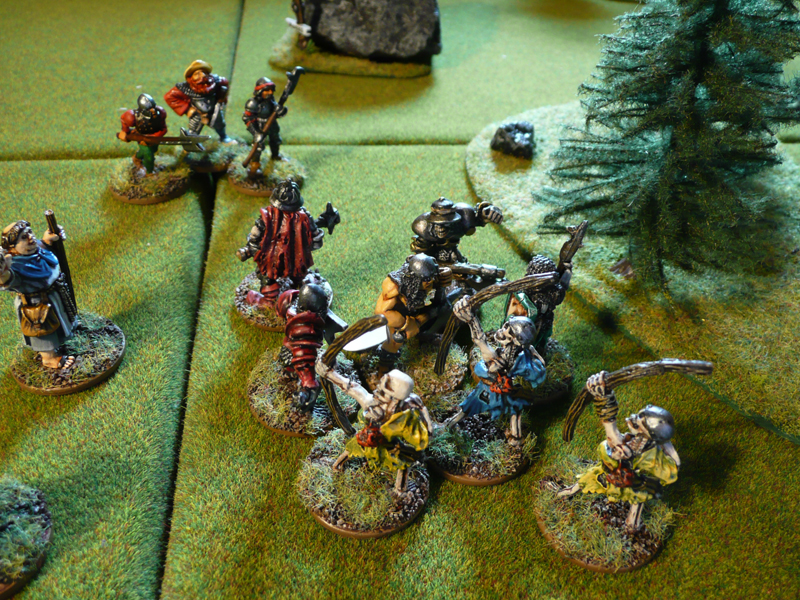 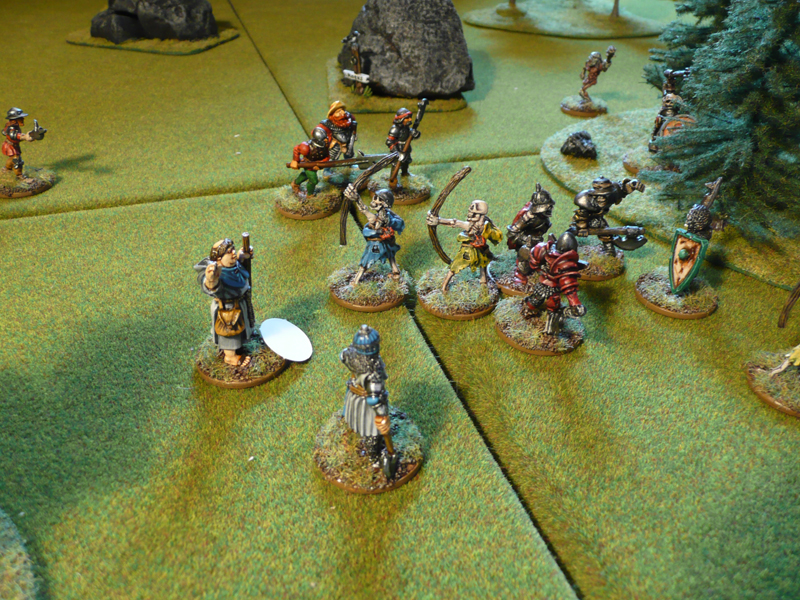 The militia men move in and engage the archer skeletons, with no effect. Brother Wendel stands up and attacks one of the archers, but loses his balance and stumbles back. Duncan does a powerful attack on one of the skeleton warriors and scores a gruesome kill. The three skeleton warriors in range are transfixed, while the three archers are unaffected. Aldor emerge from the woods to ambush the rear skeleton archer, who is killed. The mayor fails to activate. 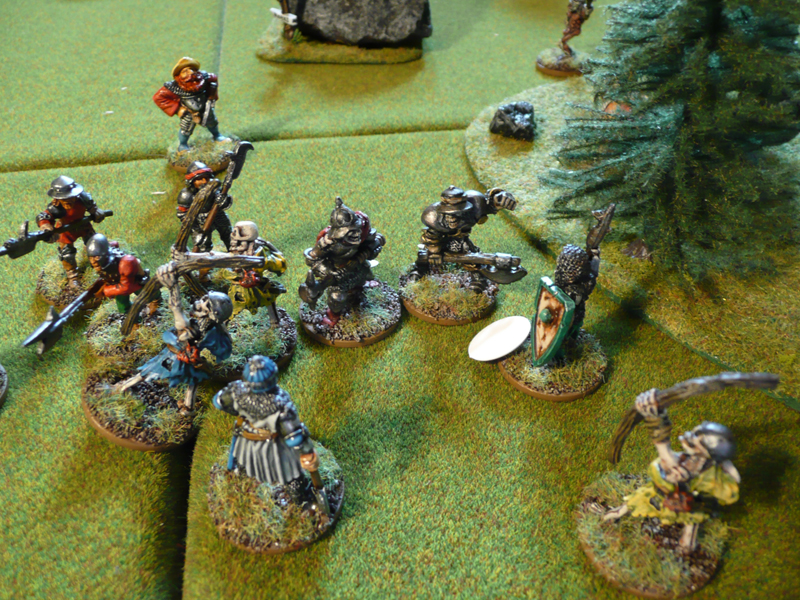 One of the skeleton warriors shrugs off the transfix, and moves to engage Aldor. The two remaining archers take turns attacking Sven, the militiaman. The first attack brings him to his knees and the other archer finish him off. One of the skeletons in the right flank woods run out ambushing mayor Boismann, who is pushed back but otherwise unharmed by the assault. 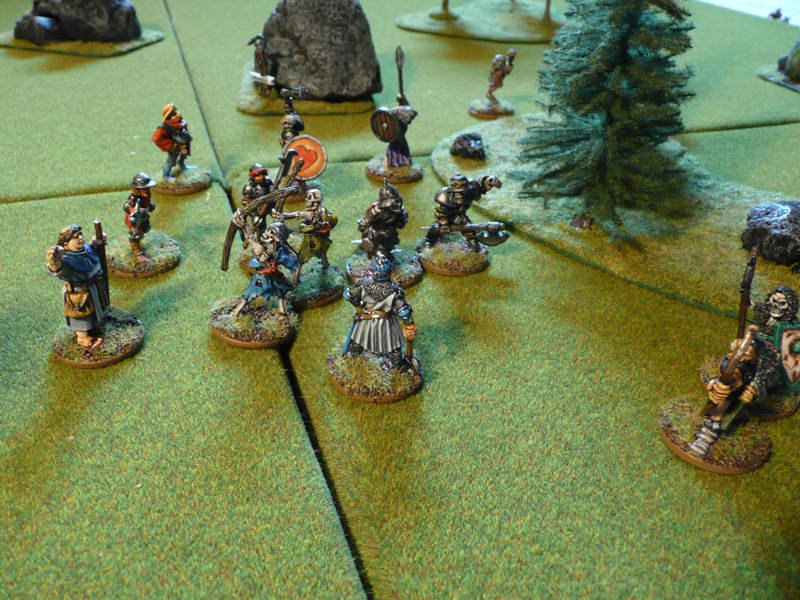 Bo attacks a skeleton archer and pushes it towards Duncan, who finishes the archer off with a powerful attack. Hans moves into contact with one of the transfixed skeletons while brother Wendel rushes to aid Billy but doesn’t quite reach him. In an unusual display of bravery, mayor Boismann moves to assist Aldor in the fight with a skeleton warrior. The ranger fails his attack and is pushed back by the foul undead. 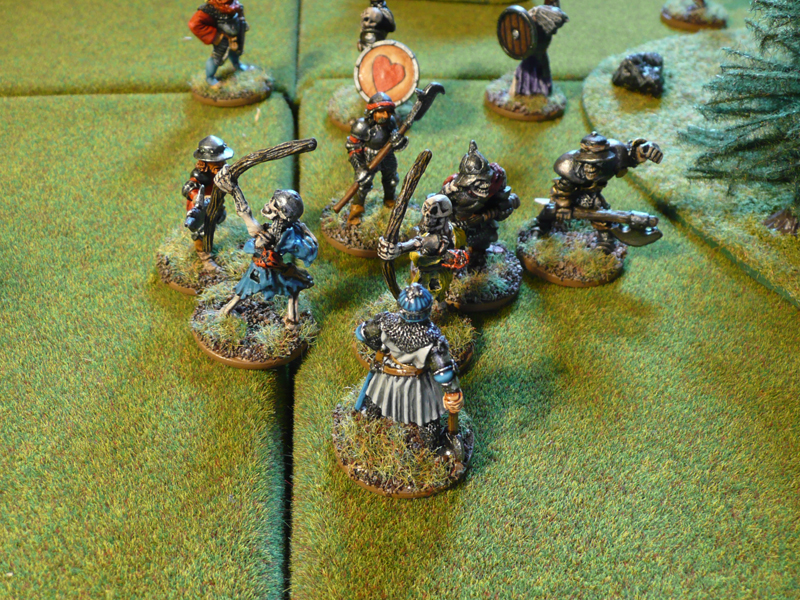 Another skeleton warrior recovers from the transfix, while the two farthest skeletons move in behind Hans and Bo. The archer does a powerful attack on Bo and scores a gruesome kill. Seeing his last comrade fall, Hans flees. Duncan stands alone, facing five skeletons! The skeleton warrior engaged with the mayor activates with three dice, causing a turn over but one action is available. The mayor is attacked and falls. 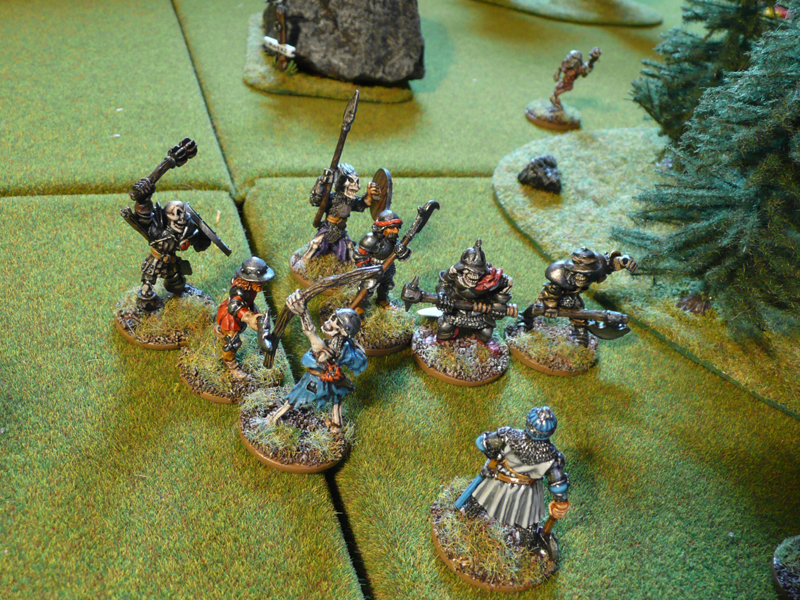 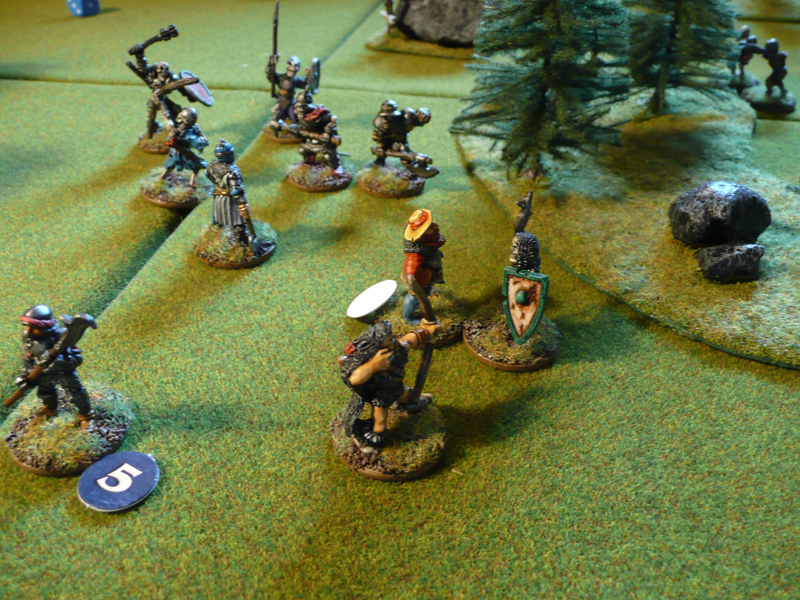 Brother Wendel reaches Billy in the nick of time and is able to stop the bleeding on the young man. Mayor Boismann recovers from the attack, and with Boismann’s aid Aldor rushes the skeleton only to once again push it back. Duncan charges the same skeleton warrior, who is very resilient and is only pushed back. Hans recovers from routing. 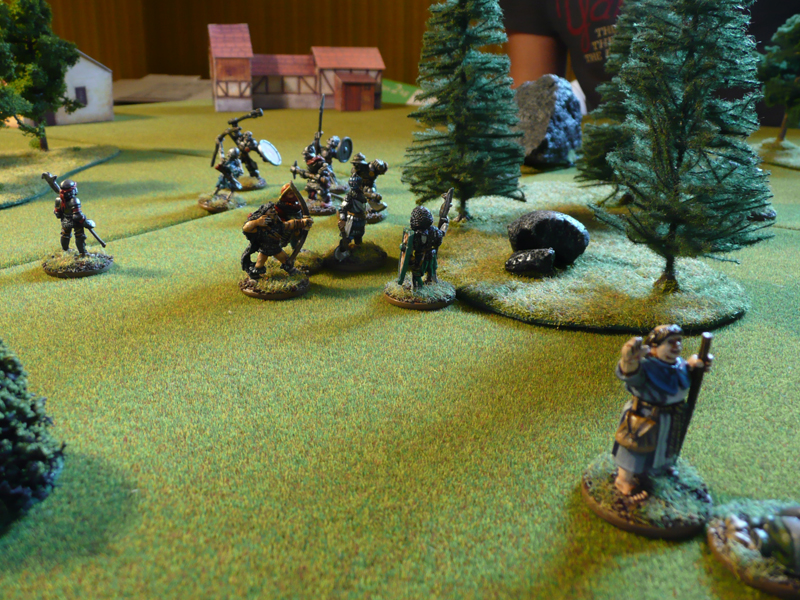 The remaining skeleton archer fires an arrow at the mayor, who suffers a gruesome death. Covered in the mayor’s brains, Aldor flees. While Hans and Duncan stand firm, brother Wendel decides he’s done his part of the deal in rescuing the boy and flees. Two skeleton warriors move in on Duncan, and one engages Hans. The transfixed skeleton causes a turn over when trying to activate. 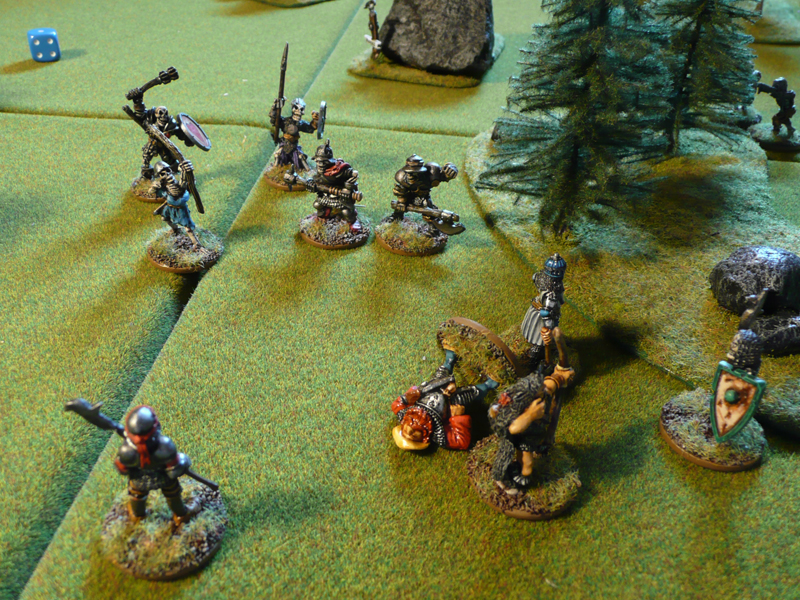 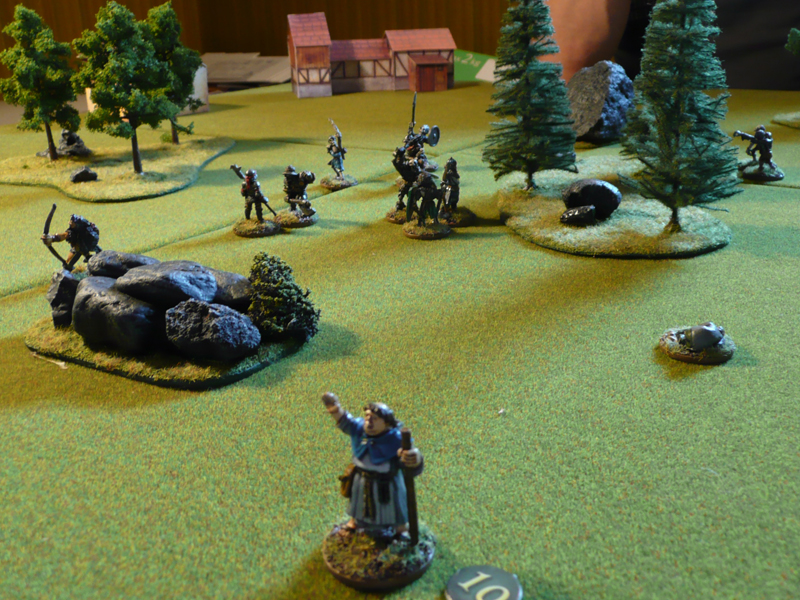 Wendel flees off the board, but Aldor recovers. Duncan attacks a skeleton but is pushed back himself. At this point, the heroes decide they’ve gotten what they came for and quickly leave the battle field together with the severely wounded Raab and a very pale farmer boy. 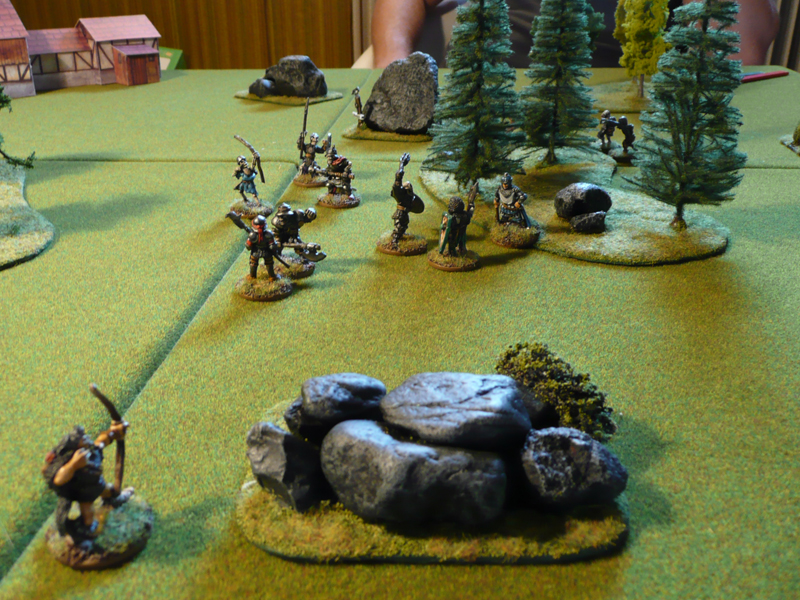 The mayor’s body is left to an horrible end in the fields, where the zombies feast on his carccass before returning into the woods.

Back in town, the healers can do nothing for Raab who dies an agonizing death. Aldor is devastated, but swears to avenge his friend. He will forever hate undead, and will not rest until he finds the person or persons responsible for bringing the dead back to life. Also, there might just be a small chance for him to revive his lost friend…

We thoroughly enjoyed the game, and I’m very eager to paint up the few minis we need for the next scenario.