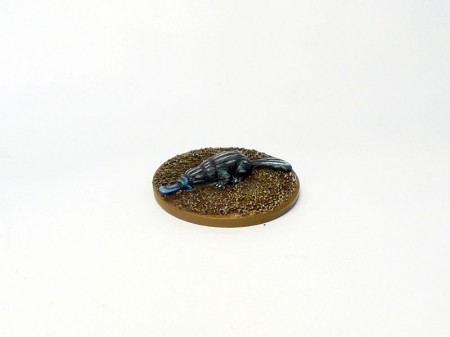 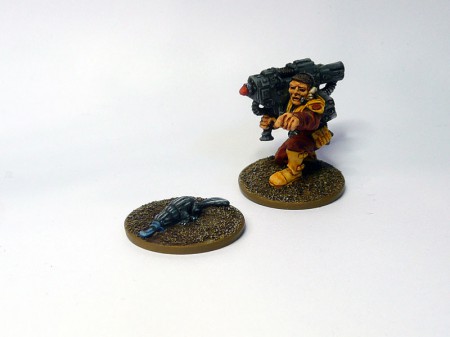 I recently played my first game of anything at all this year, and with my recent shift to science fiction toys it seemed appropriate we’d give Pulp Alley a trial run. We decided to do a simple Smash and Grab scenario, with four scattered minor plot points and a major plot point in the middle of the board. As I haven’t played scifi games at all for more than a decade, I’m not exactly spoiled for choice when it comes to scenery so we used mostly repurposed fantasy terrain. I have made four pump stations, power generators and/or general processing units that are more or less finished (save for some detailing). Those were arrayed around the central pyramid to scifi things up.

Captain Morley and the lawmen of New Haights have ventured out into the wilderness on the far side of McKemmler IV. The legends of ancient ruins from a long forgotten civilization seems to have been proven correct and a rumoured doomsday device have attracted unwanted attention. Master of disguise Abdul Goldberg and his ne’er-do-wells have made planetfall and plan to trigger the activation sequence, threatening not only life on the planet but also the lucrative mining facilities of Armasec in the whole McKemmler system. 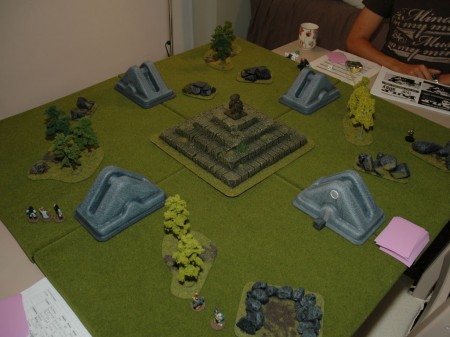 Atop the ancient pyramid rests a weathered, ominous statue of elder horrors. Can it be used to bring system wide destruction or is it just old superstition?

The game started off with a lot of movement as both sides jockeyed for position on plot points, and since there was no shooting allowed the first turn. The forces of law and order decided to split up, with the disposable ASOLE droids charging up the centre of the table, in cover of the pyramid. Commander Skroob noticed something hidden in a nearby cluster of trees, while the co-pilot covered Morley as he made his way towards some hidden explosives, hoping to use it in the prevention of any evil plots, plans or schemes. 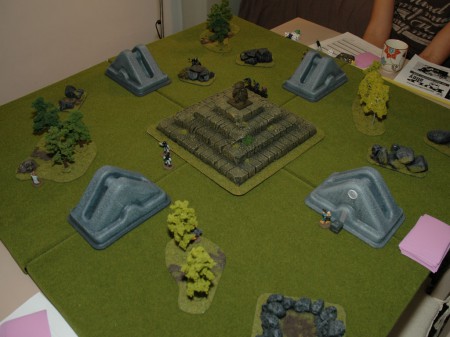 Captain Morley quickly gained access to the explosives hidden away near one of the flux capacitors while the two ASOLEs scaled the pyramid. When they got to the top, they were quickly disposed of by the villains. I had hoped they’d have a bit more staying power. 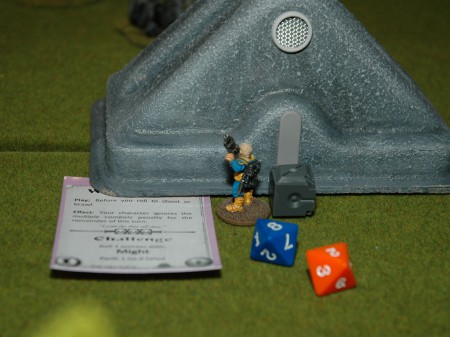 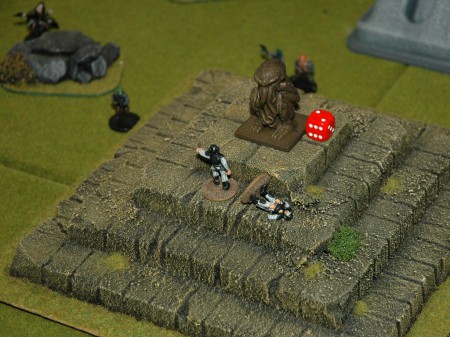 Queue Wilhelm-screams. In the upper left corner you can see a blurry picture of the elusive Abdul Goldberg, in disguise to boot!

On the other side of the pyramid, Abdul Goldberg and his cronies moved up to the base of the pyramid. Goldberg’s second in command had somehow become separated from the others, but being faster than most people he gained on them and could get in contact with the maintenance access hatch. 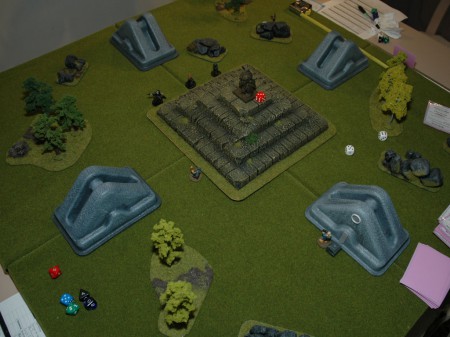 The villains, lead by Goldberg, rounded the base of the pyramid and the blast shots started flying. No matter how many rounds the two pilots fired at him, Goldberg emerged unscathed and could esily dispose of Stickney who had exhausted his rocket launcher amunition and had to resort to his side arm. 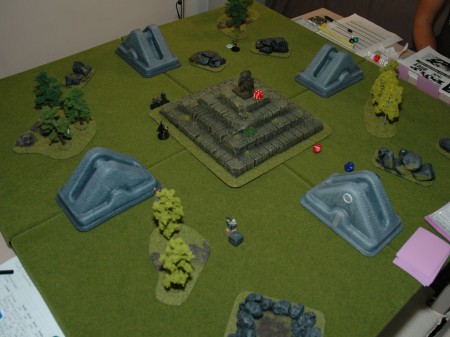 In the meantime, commander Skroob had uncovered a jade dagger in the small cluster of trees, tucked away in a smaller version of the monument at the top of the pyramid. Without this dagger, the villains would hopefully not be able to activate the device. 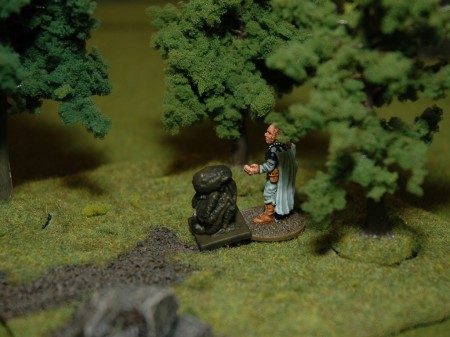 Unfortunately, one of Goldberg’s crew decided that could not go unpunished and the two came to blows causing Skroob to drop the dagger in the struggle. Goldberg made an attempt at charging captain Morley but slipped and fell. Morley saw his chance and ran to the top of the pyramid, where he uncovered the truth about the pyramid. It was in fact not a device to lay waste to the planet, but a large cache of precious gold. Could it be that this ancient civilisation fell when they discovered gold and were destroyed by warring tribes and colonists? 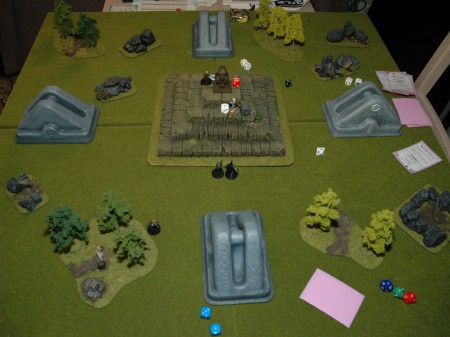 Morley, realizing the cache of golden artifacts could come in quite handy when renovating his ship, attempted to steal away with the gold but was subdued by the dastardly villains. Instead, Abdul Goldberg had once again dodged the long arm of the law. Morley could do nothing but shake his empty fist at the sky when Goldberg’s shuttle craft took off.

In conclusion, we had fun with Pulp Alley and it’s still a strong contender for my system of choice for scifi skirmishing. There were a few things that didn’t really sit well with me, however. I’m curious to hear other people’s opinions on them. These are mere observations and shouldn’t be considered a bash or any form of advocating for people to not play Pulp Alley. It’s a solid system with many a benefit.

1. What incentive is there to attack someone, when there is no added benefit from it other than being the one who matches the dice?

2. Hardened Veteran seems like a rather powerful skill as it negates a core mechanic (ie ignoring multiple combats) and as such a Leader or Sidekick with that ability will be very, very hard to get rid of. As a matter of fact, it almost looked to me like a “must have” skill which in my opinion is a bad thing in a rules system. I’m thinking of banning HV from our games.

3. Plot points and the turn limit makes it a race game. I’m not saying this is a fact, but to me it felt a bit like the strong focus on plot points makes this less of a tabletop war game and more of a tabletop race game. Throw a few speed bumps in front of the opponent while you’re running for the plot points with your strongest guys.

4. Plot points can make a scenario idea hard to implement. In the same way the plot point system makes it easy to avoid the old “line your soldiers up and gun it out” it also hampers straight out confrontations.

5. Allies and followers felt a bit too generic and I think part of the charm with scifi gaming is alotting equipment to characters. It’s hard to (stats-wise) differentiate between a space marine in power armour carrying a missile launcher and a colonial marine type of guy with a lasgun, within the confines of ally and follower. One approach is “it’s not important, they’re all just mooks anyways – the leader and the sidekick are where it’s at”. I’m not sure that approach appeals to me in full. I’m a sucker for systemizing my miniatures collection into rule sets.

I had enough fun for me to decide to shell out on the physical product though, so I’ll order the printed rule book and the deck of fortune cards from Statuesque Miniatures shortly. Give the game a spin, I can definitely see myself having some fun participation games with this when I have a few mates over for a game night!