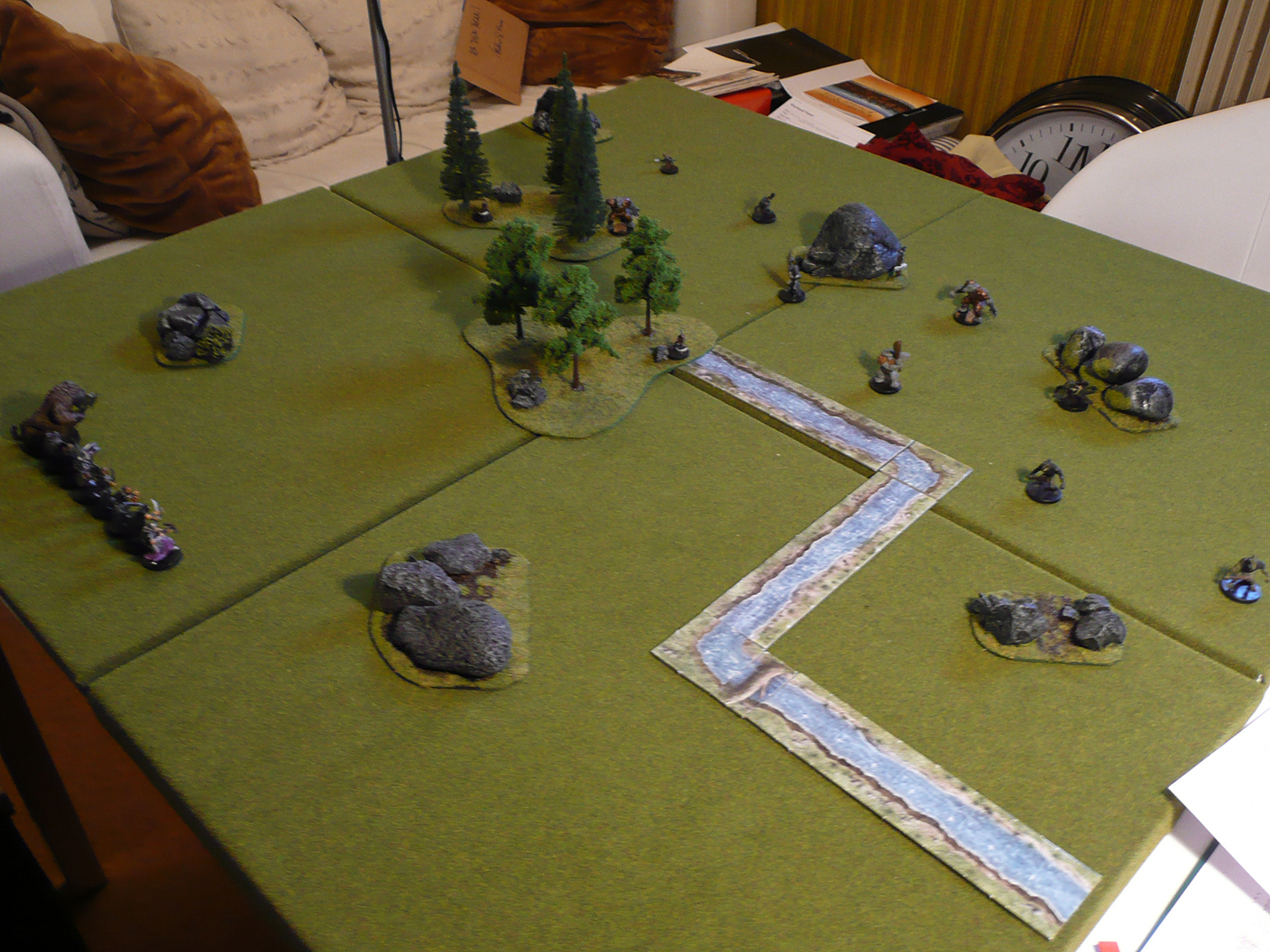 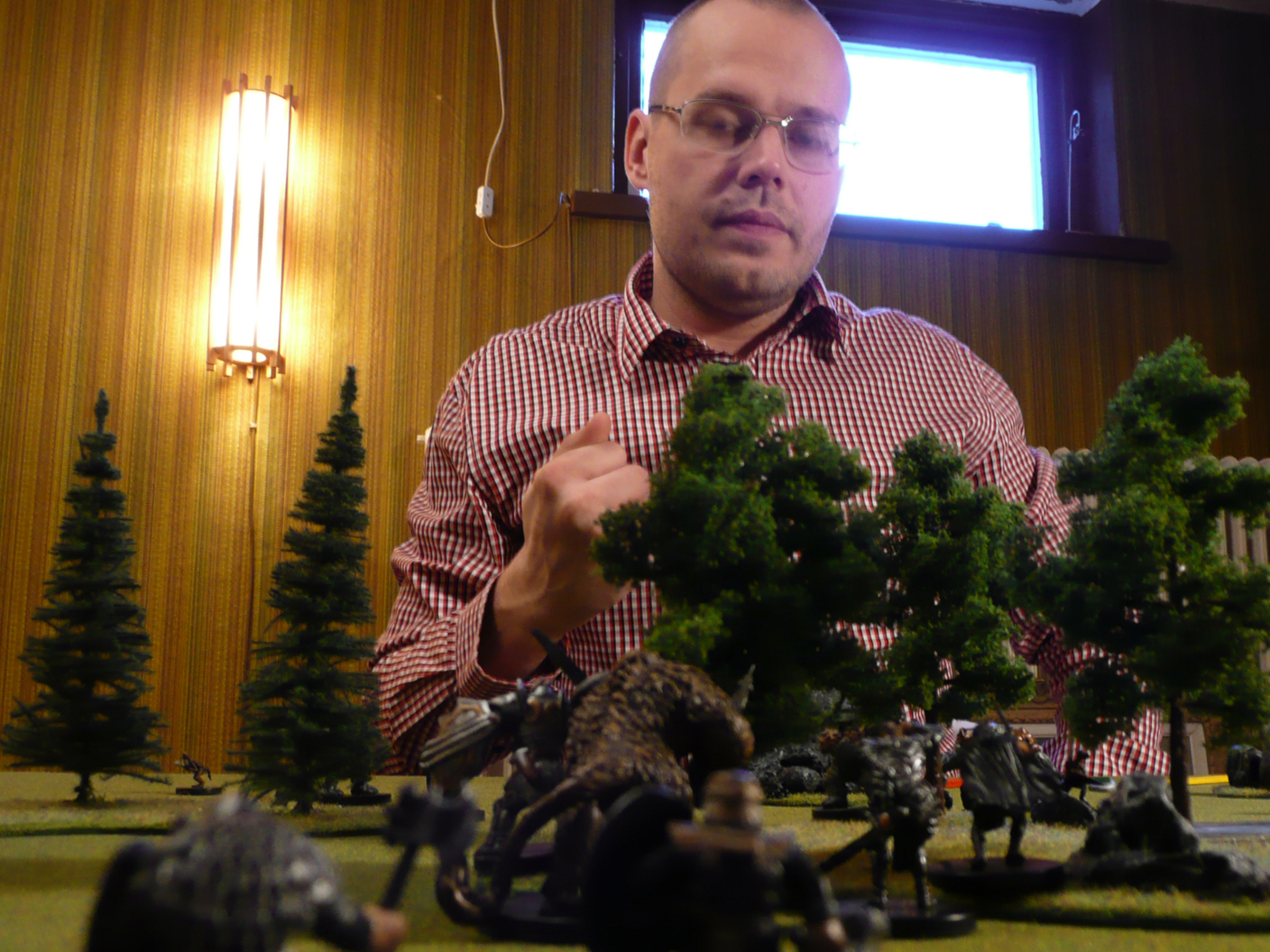 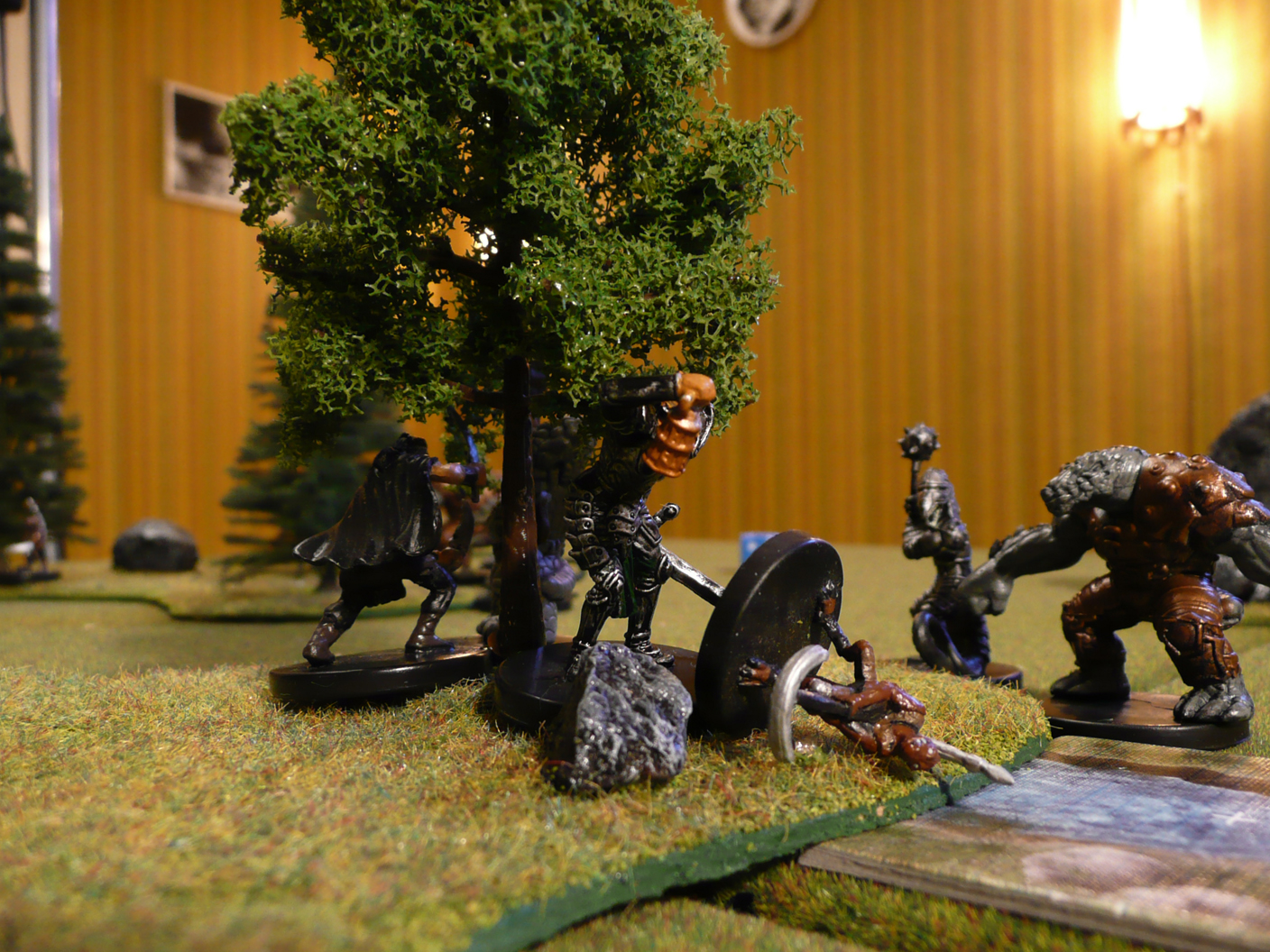 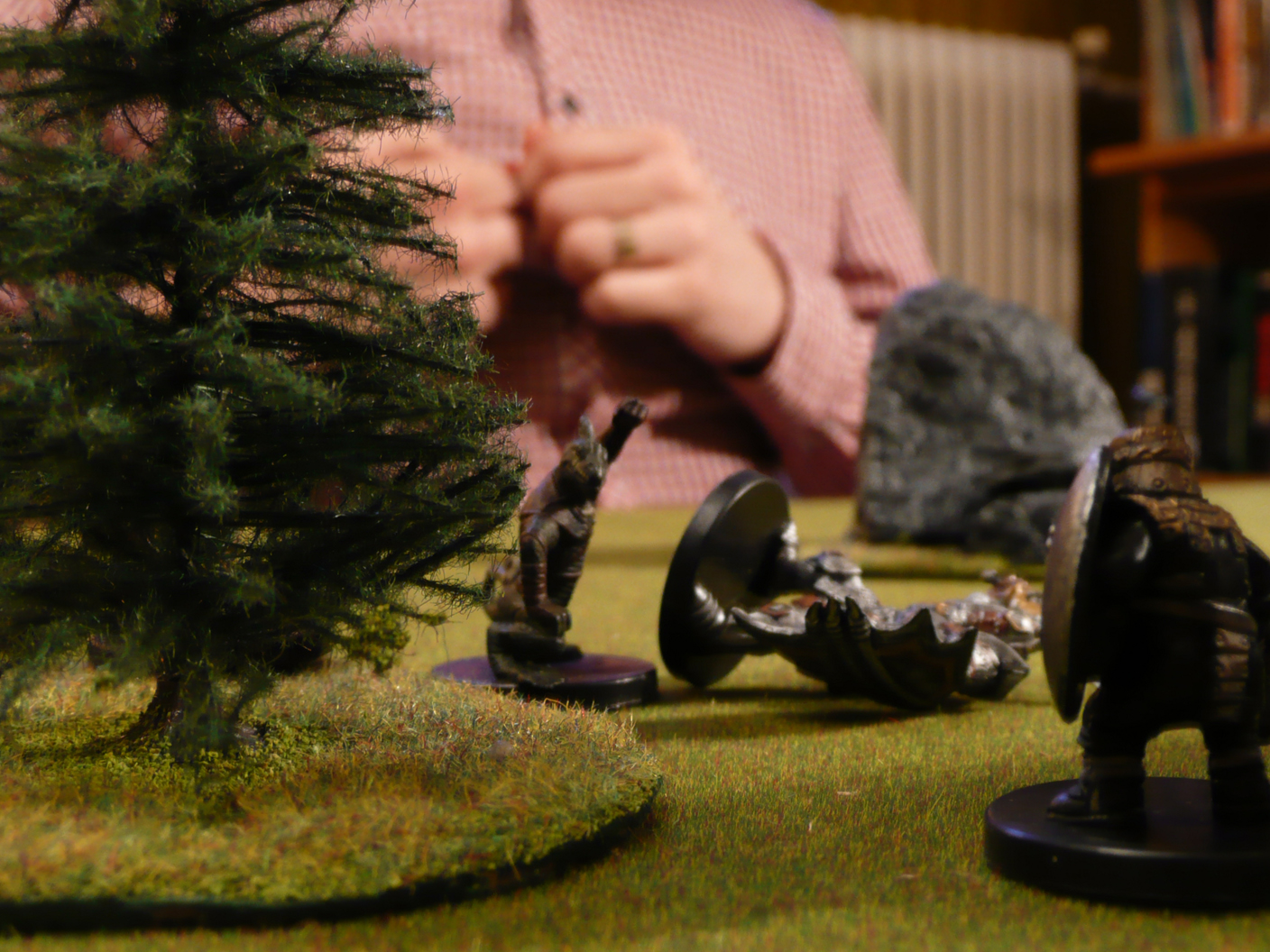 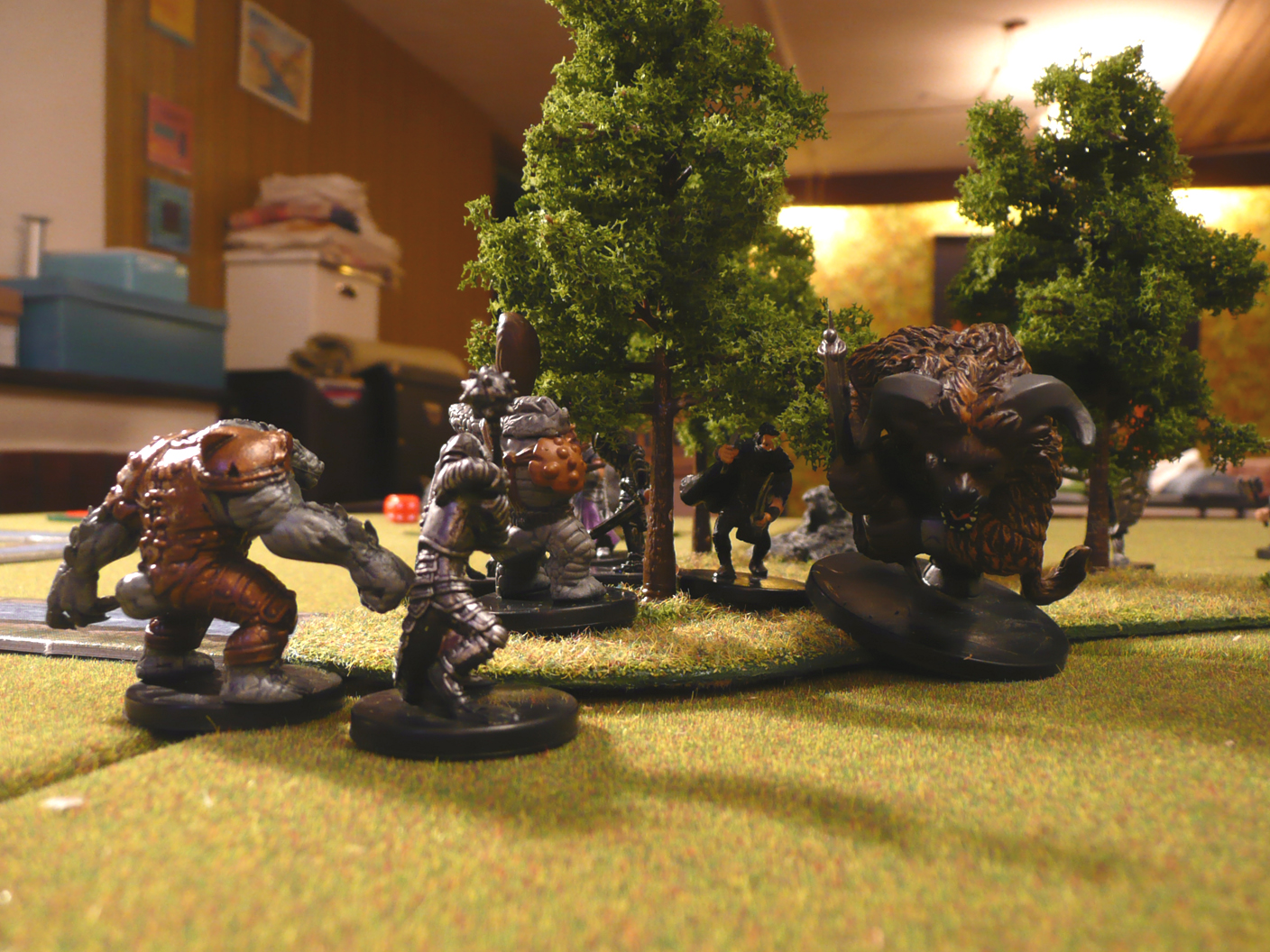 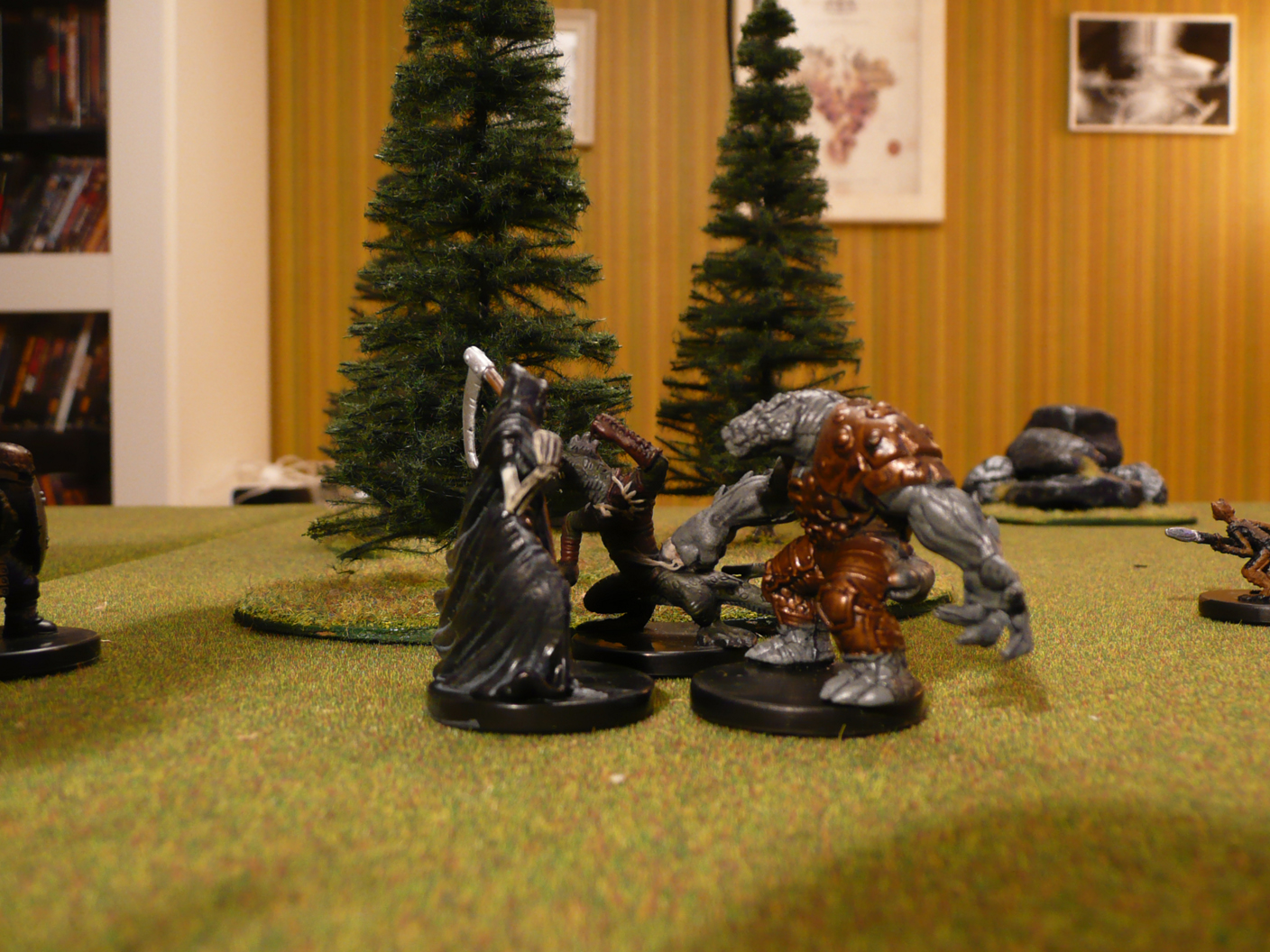 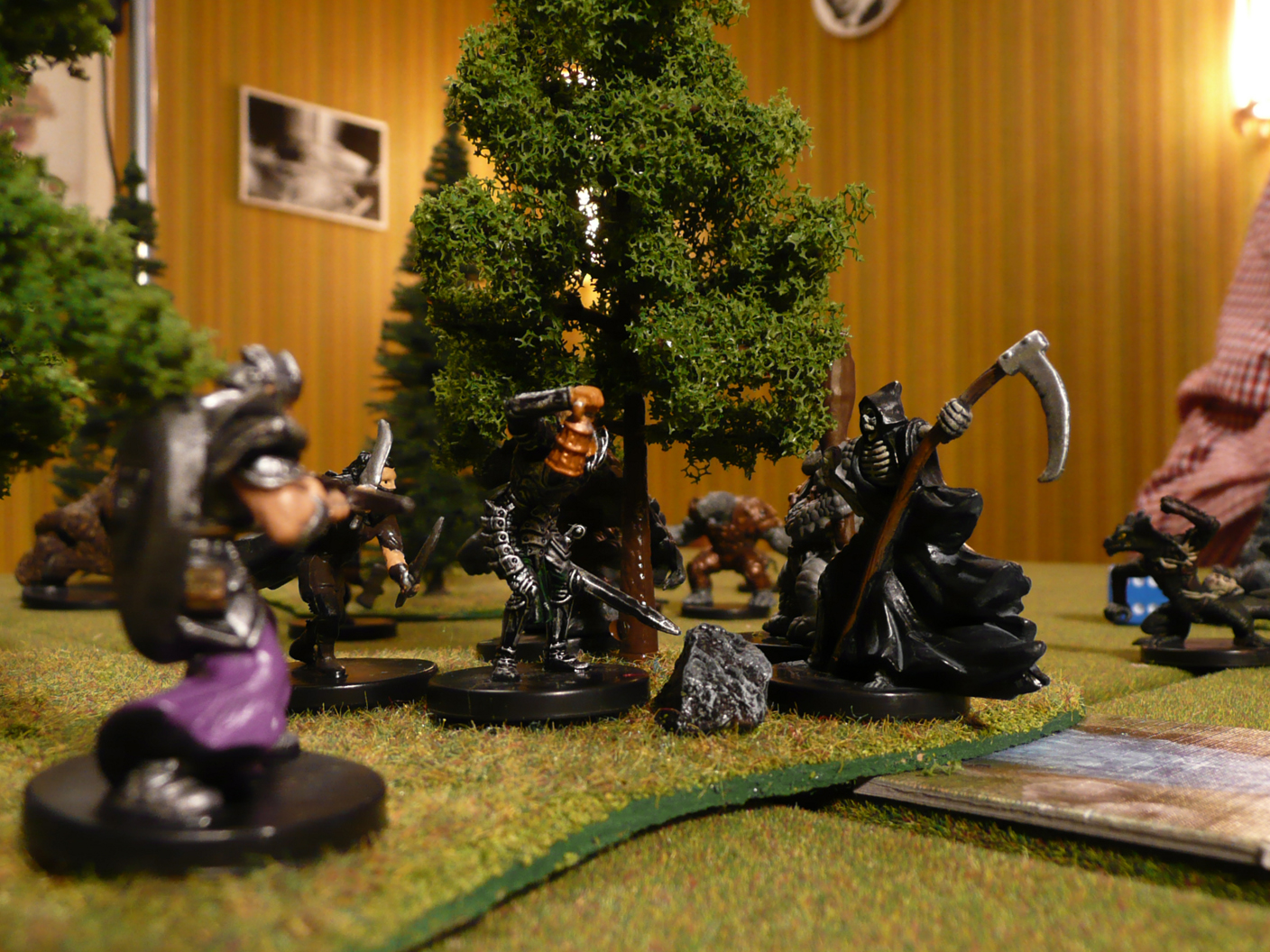 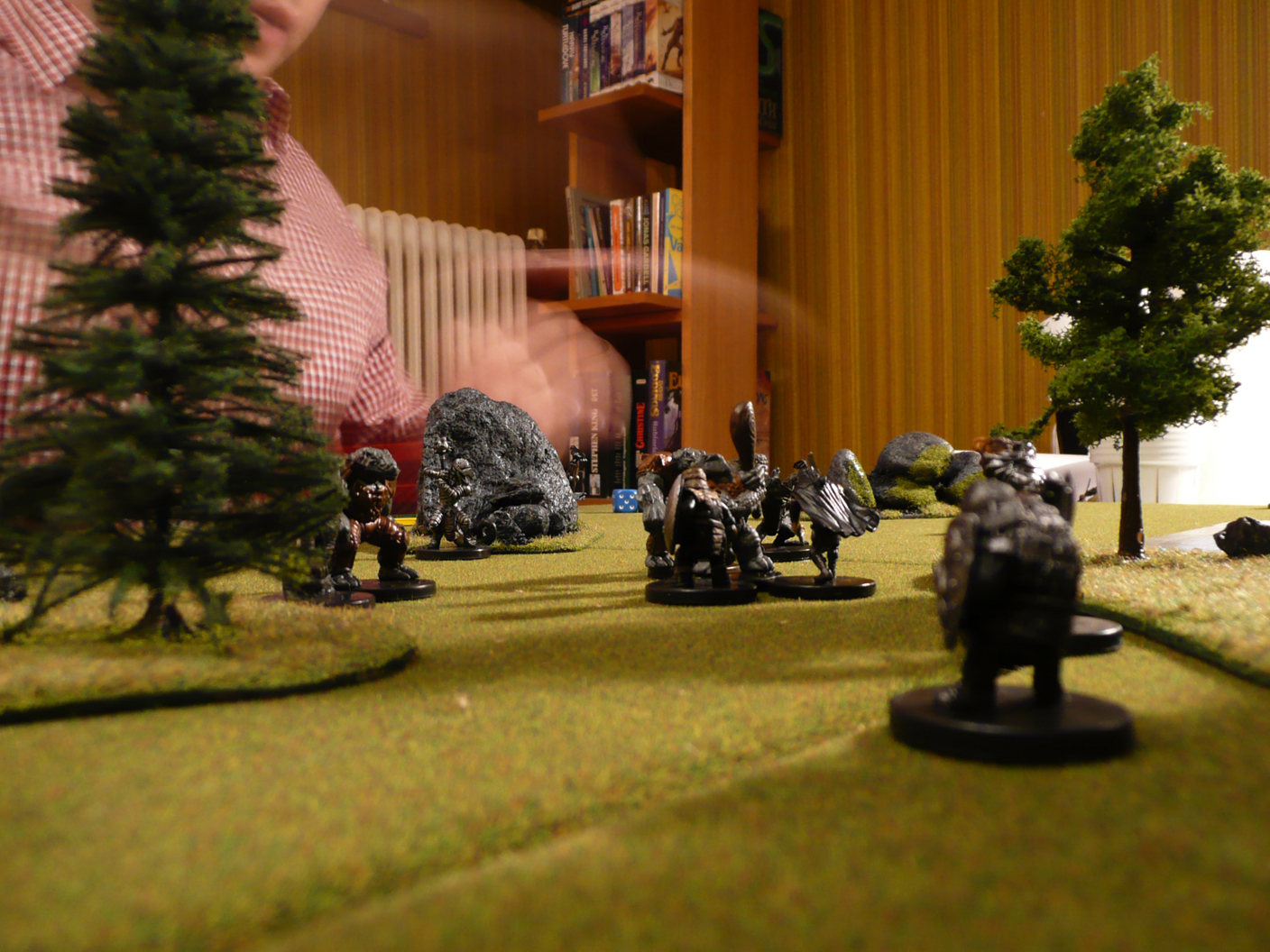 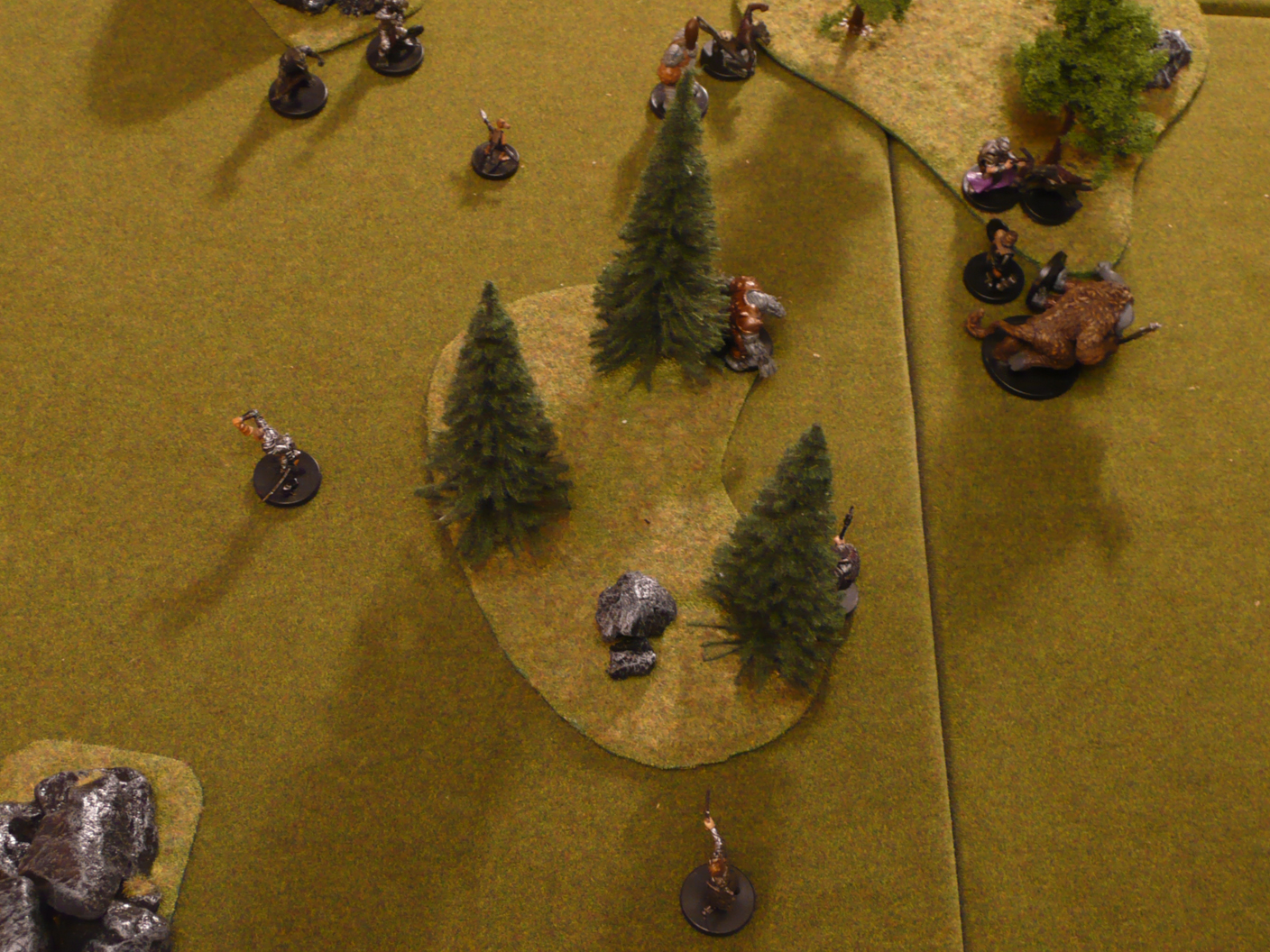 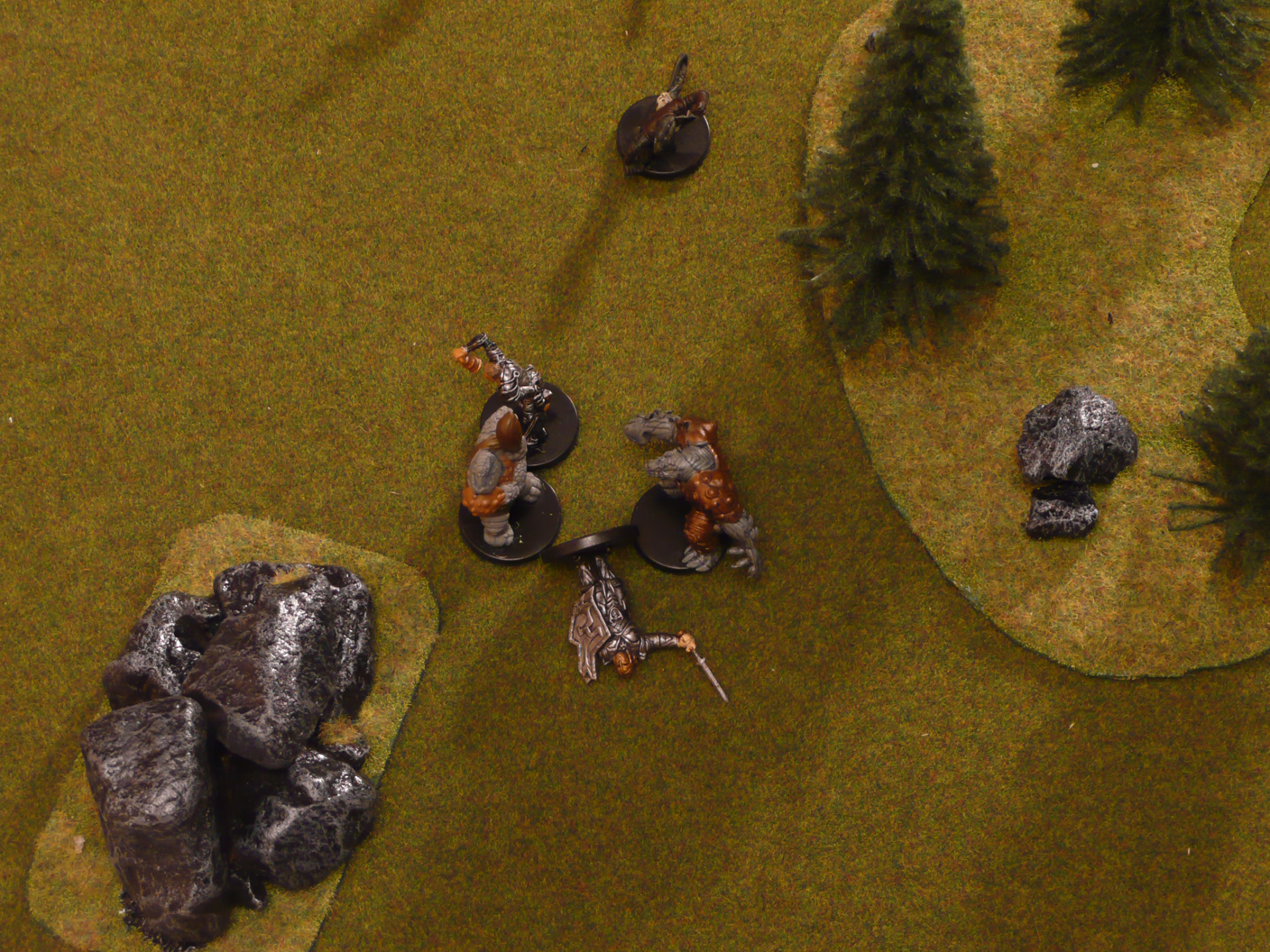 As an interlude between the two scenario reports from our SOBH campaign, I give you… wood! Unfortunately the picture with the conifers came out terribly blurred so I didn’t bother linking it to a larger sized image. Click on the other picture for a larger version though. 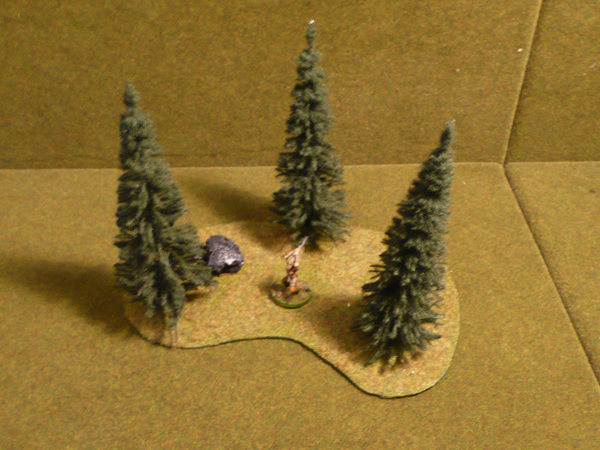 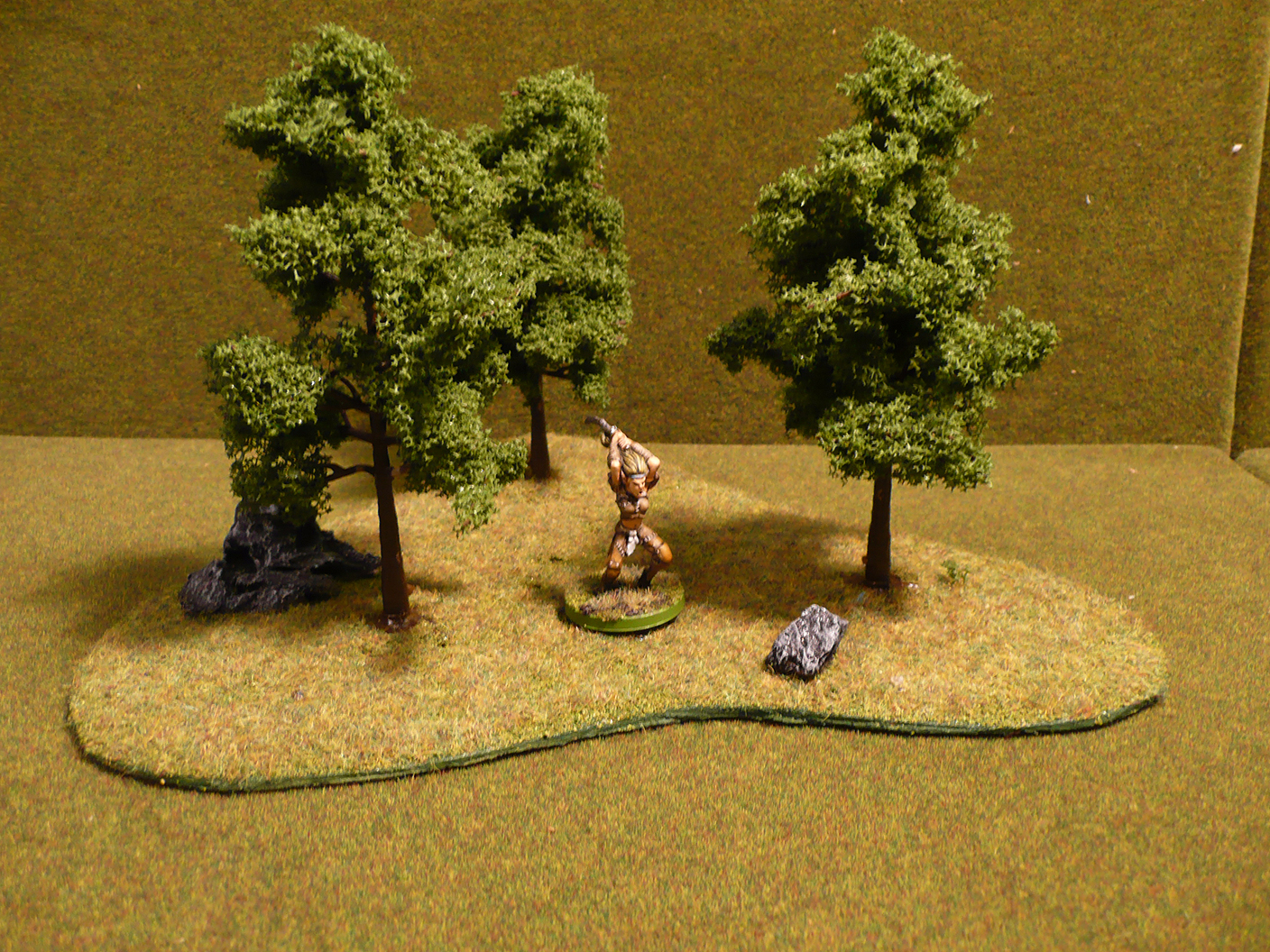 The base of the stands is regular old masonite, cut to shape and slightly beveled with sand paper. I attached the trees with hot glue and then covered the whole base in flock and static grass, with a few small pebbles for added life. Didn’t want to put too much stuff on the stands as they need to be able to hold miniatures during games as well. The trees are H0 scale ones from Faller and were a christmas present from Marie (my very loving, understanding and generous Mrs). I made them in an evening, in about two hours. Great payoff for little work! I’ll get myself some more trees the next time I’m close to a model rail road shop! I’ll try to make future tree stands have detachable trees, as these were a bit of a pain to use in games.

I’ve actually received a request too, to see the mini seen in the background of my first post. I used her as a model for this shoot and here’s a close up. Click on it for a larger image. 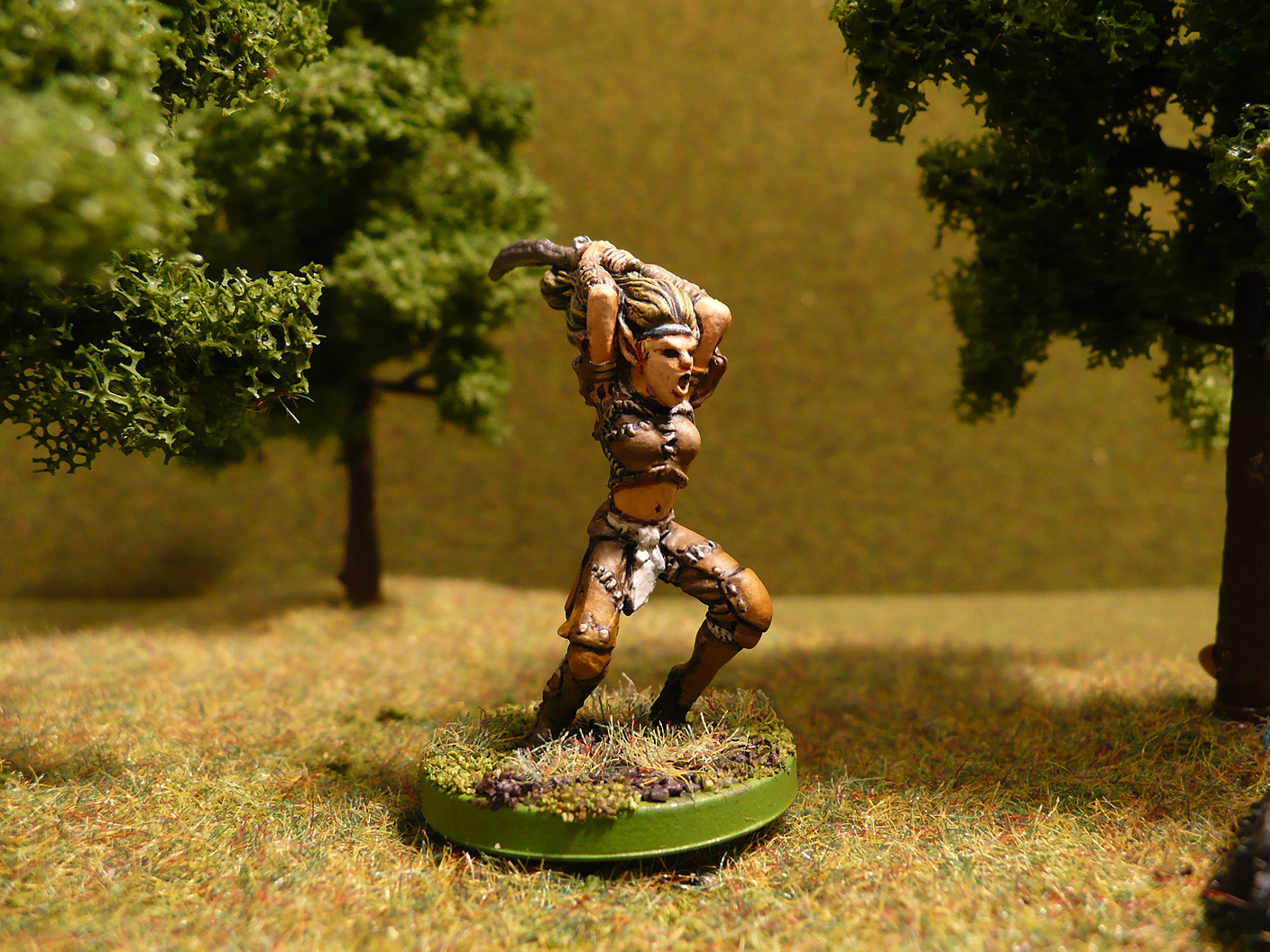 It’s a Wild Elf Warsinger from the usual D&D Miniatures line of pre-painted plastics. I rebased her and did a quick touch up some months ago. You’ll see alot more of these pre-painted plastics as they’re my main source of miniatures. Ready to play with straight out of the box, but paints up nicely if need be. Finally, they’re so much more durable than metal or hard plastic miniatures – thus easier to store!

Next time; a write up of scenario two in the three part Pyramid SOBH campaign!

I had a day off work today, and my regular gaming buddy (and cousin, to boot) Fredrik came by for a day of gaming. I had worked out a small Song of Blades & Heroes campaign for us to tackle consisting of three linked scenarios.

Pyramid Campaign – Scenario 1.
Two warring adventurer bands have acquired one half each of a magical talisman. The complete talisman is needed to unlock the secrets of an ancient pyramid, buried deep in the remote forests. Neither band is prepaired to share the certain riches to be found, thus they meet for a final show down. The winner walks away with both pieces of the talisman and can gain access to the pyramid when they reach it.

The scenario rules were quite simple. The leader of each warband have one half of the talisman. To win, a warband has to posess both talisman pieces when exiting their entry point. The entry points are a “long” section on the centre of each player’s table edge. Talisman pieces are dropped when the carrier is removed from play and any non-animal character can pick them up by spending one action when adjacent to it. 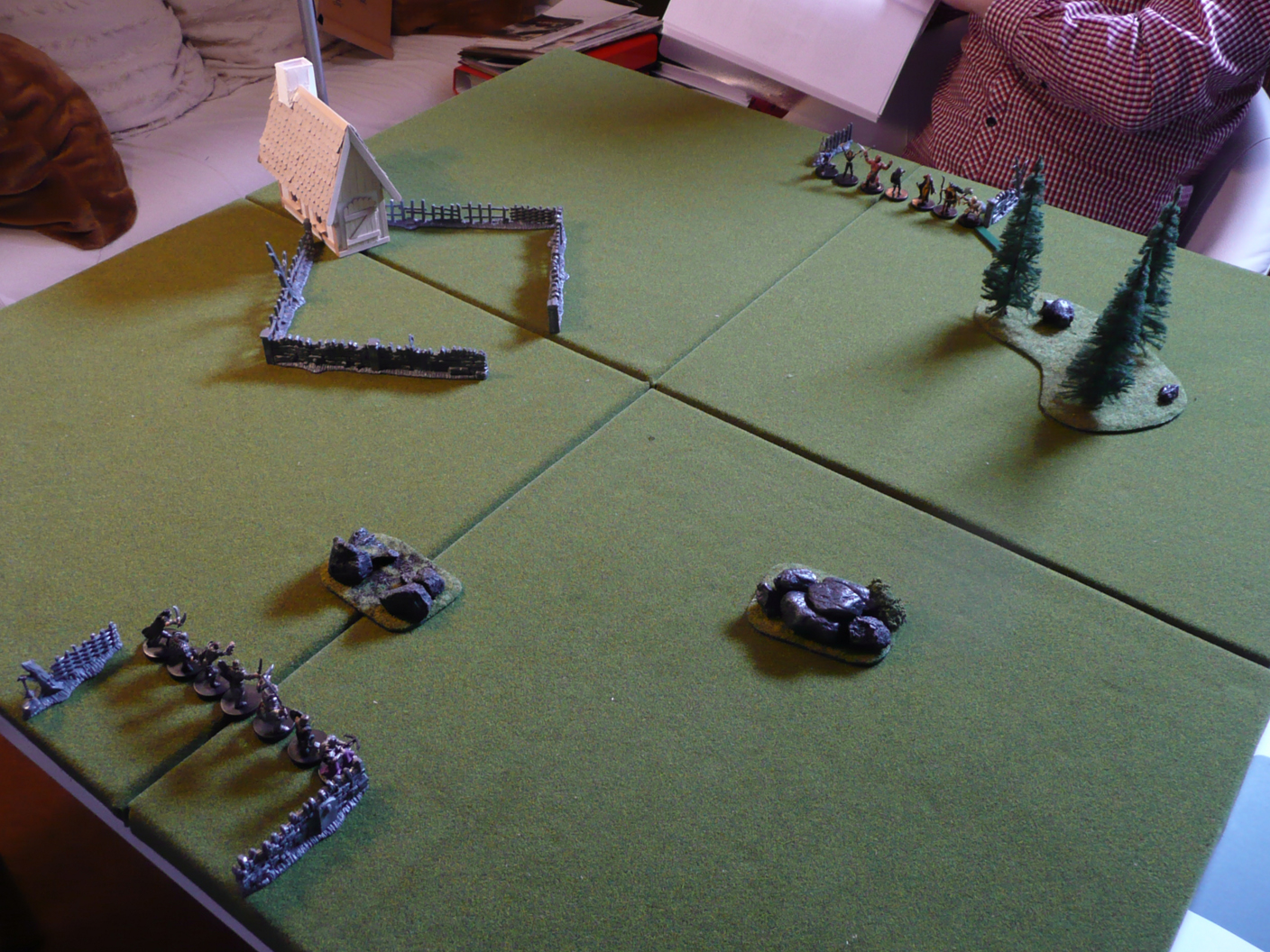 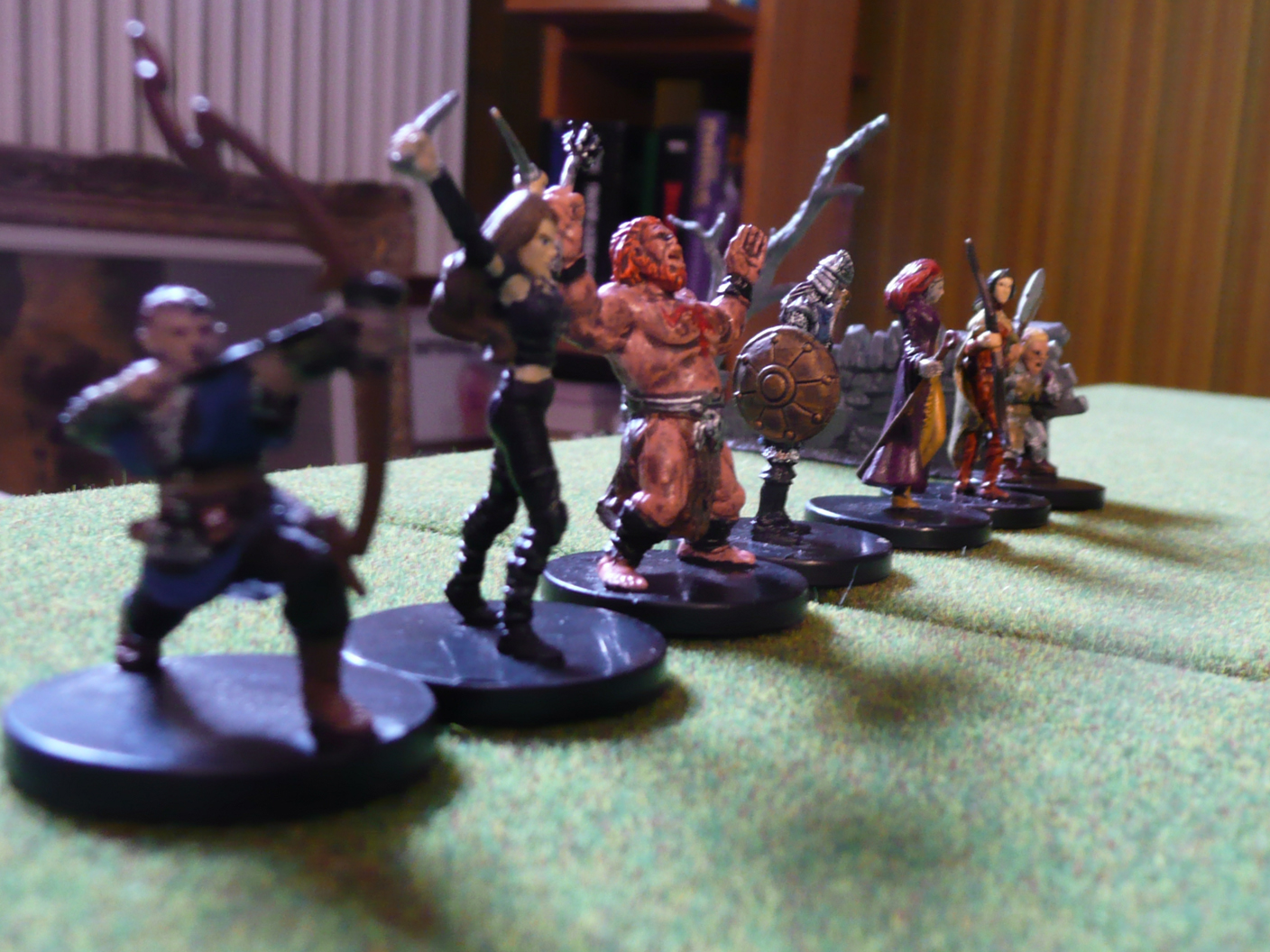 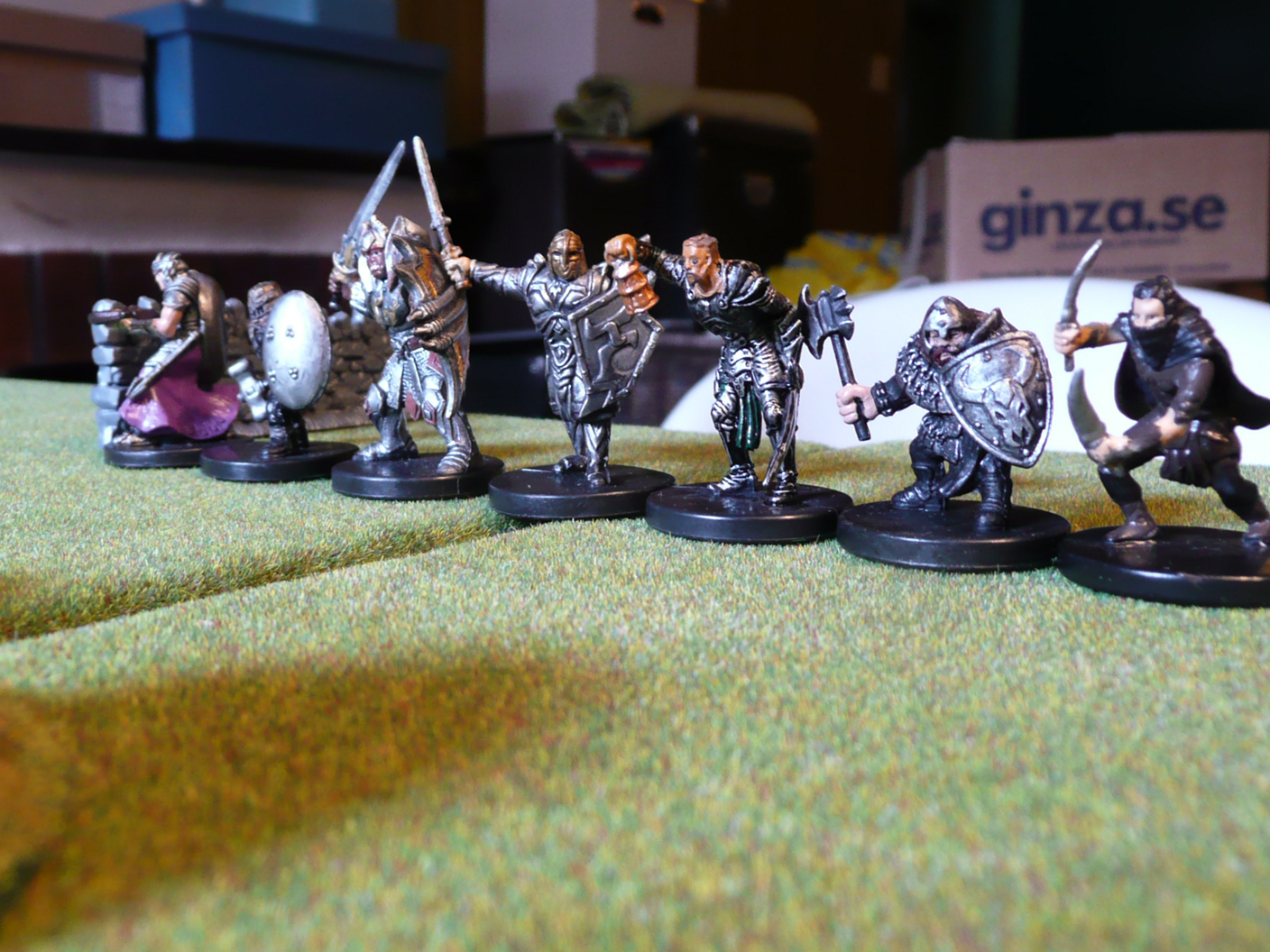 After setting up the table, we diced for initiative. I won, and advanced up the middle in a fairly fanned out formation. In retrospect I should’ve had Llandau (my elf rogue with sneak) on the right flank instead of the left, and tried to sneak up to the forests on my far right flank. 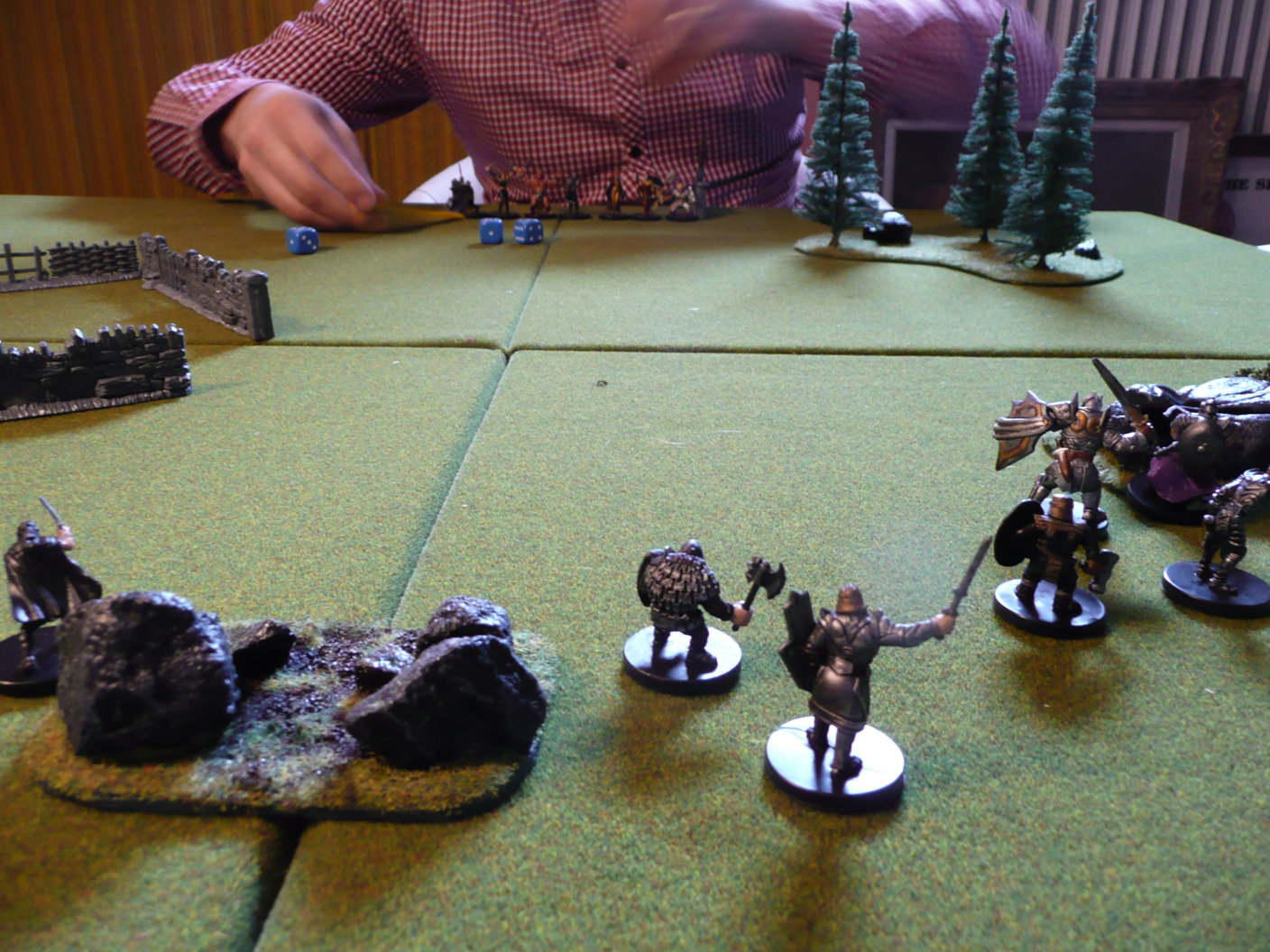 Fredrik’s forces moved up to the centre field, leaving only the elf archer Blink in the back, at the edge of the woods on my far right flank. 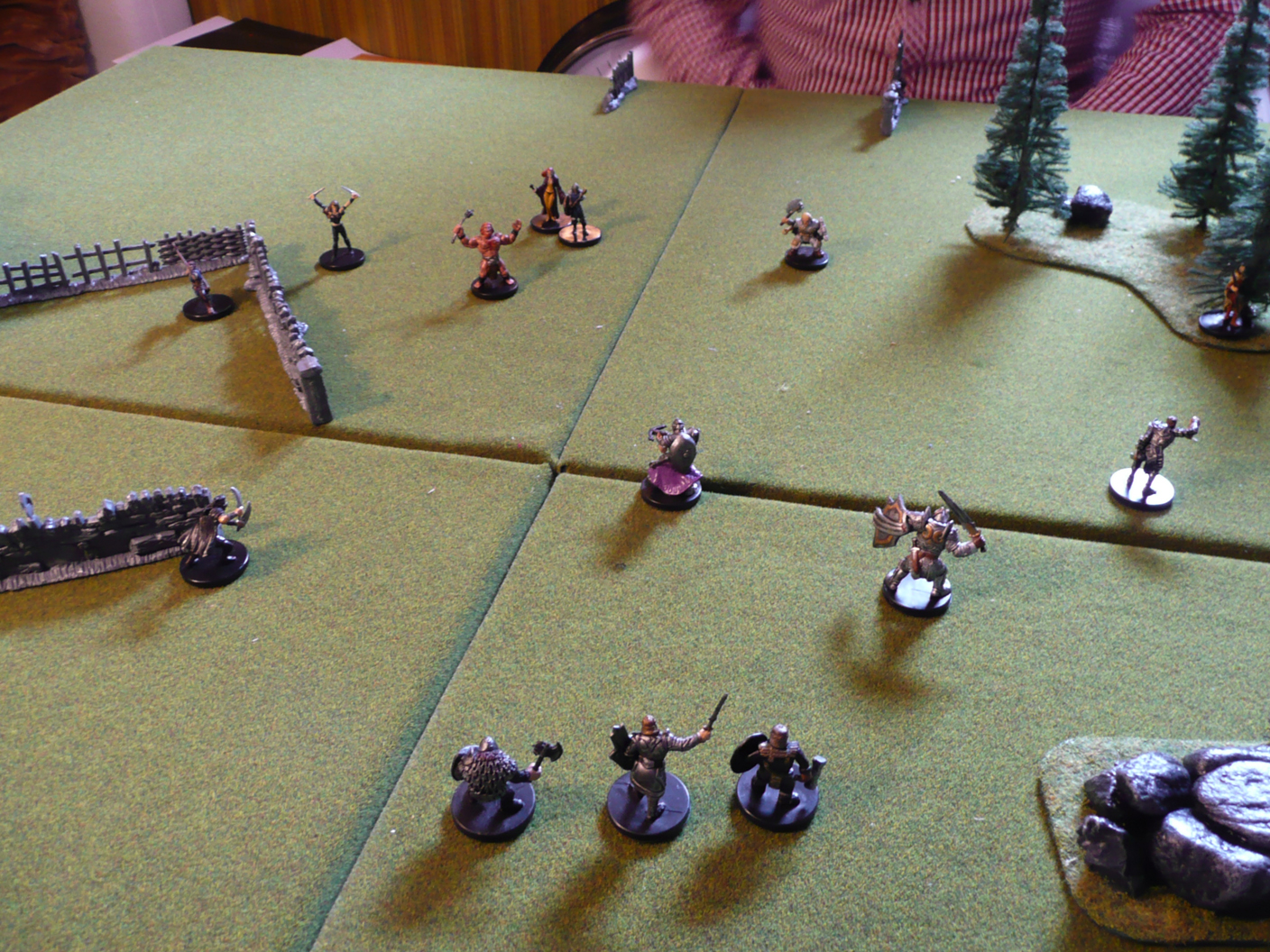 The next round, I made my first mistake. Lasek (my human witch hunter) advanced to the middle of the board and took a shot at Creed (Fredrik’s human berserker). Lasek missed his shot, and all my other activations failed. Fredrik’s Creed and Tora (dwarf warrior) closed on poor Lasek and disposed of him the next turn, while following with most of his other warriors. The grim reaper below indicates poor Llandau’s position. 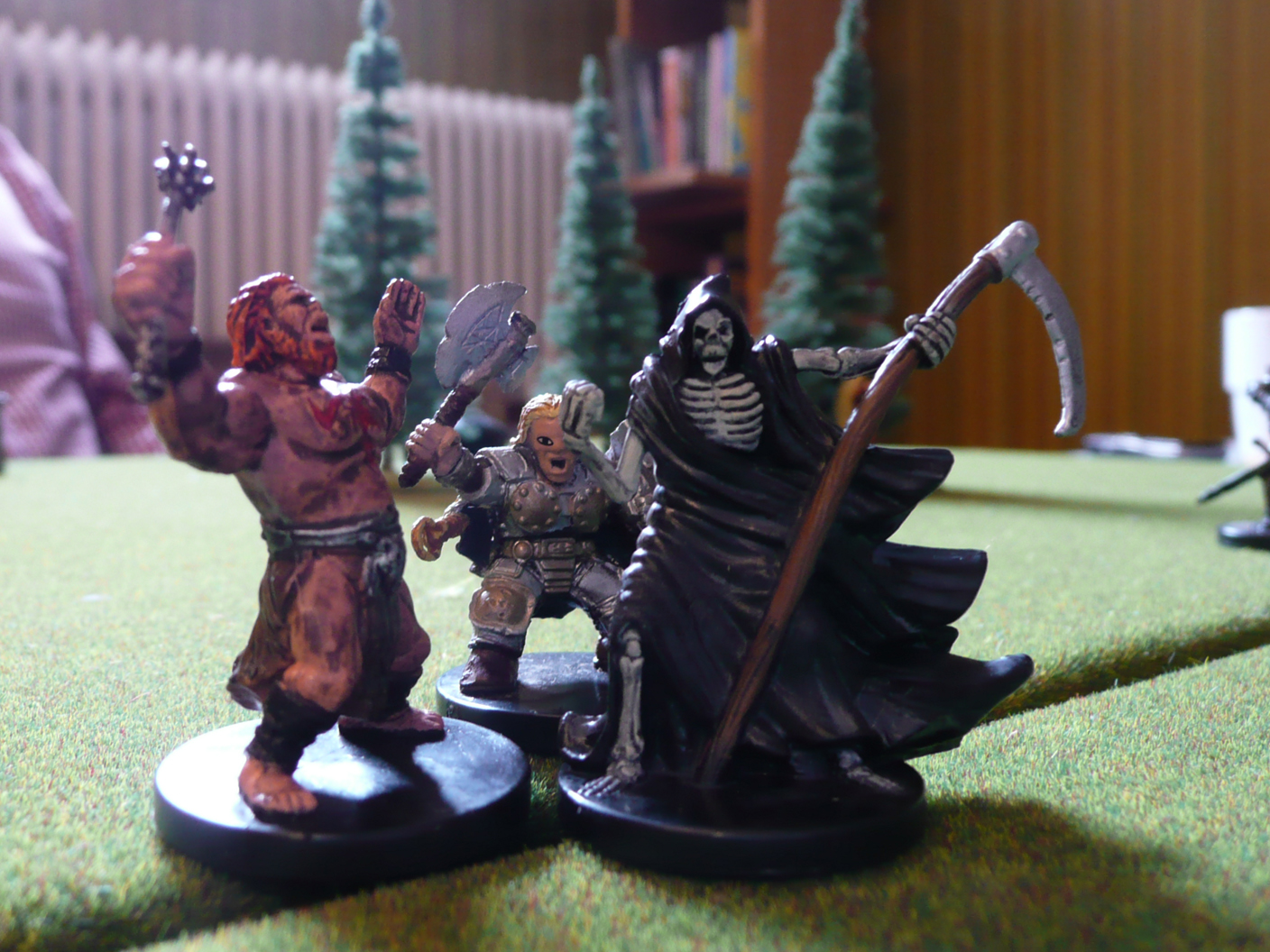 I tried counter assaulting and flanking his magic-user Summer with an ambush attack from Llandau, but failed. Llandau fell and was killed the following turn by Creed. 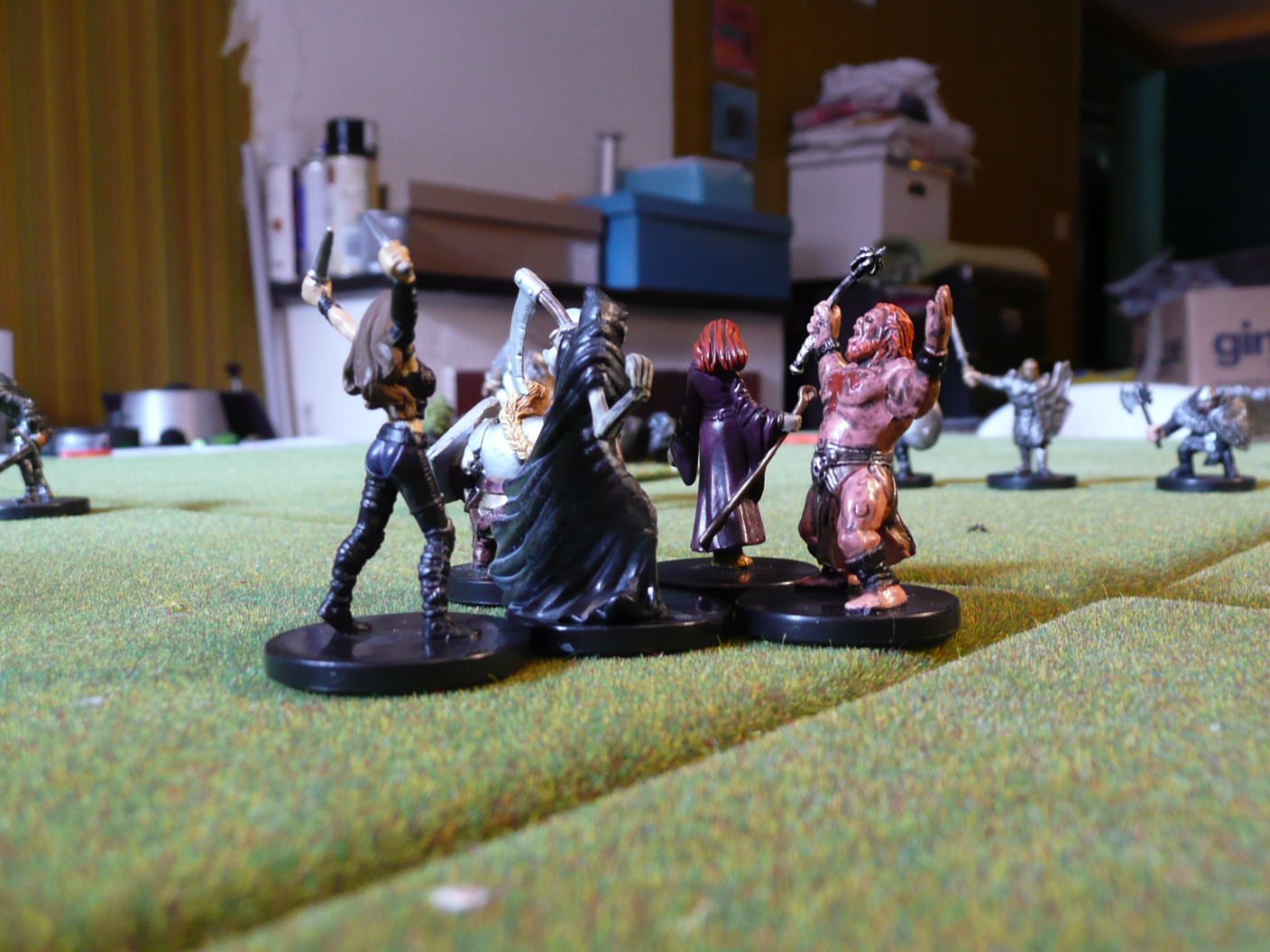 At this point, I had a feeling I would lose the game. So far, I had not managed to take any of my opponent characters out, while I had lost almost a third of my points values in the form of two characters. 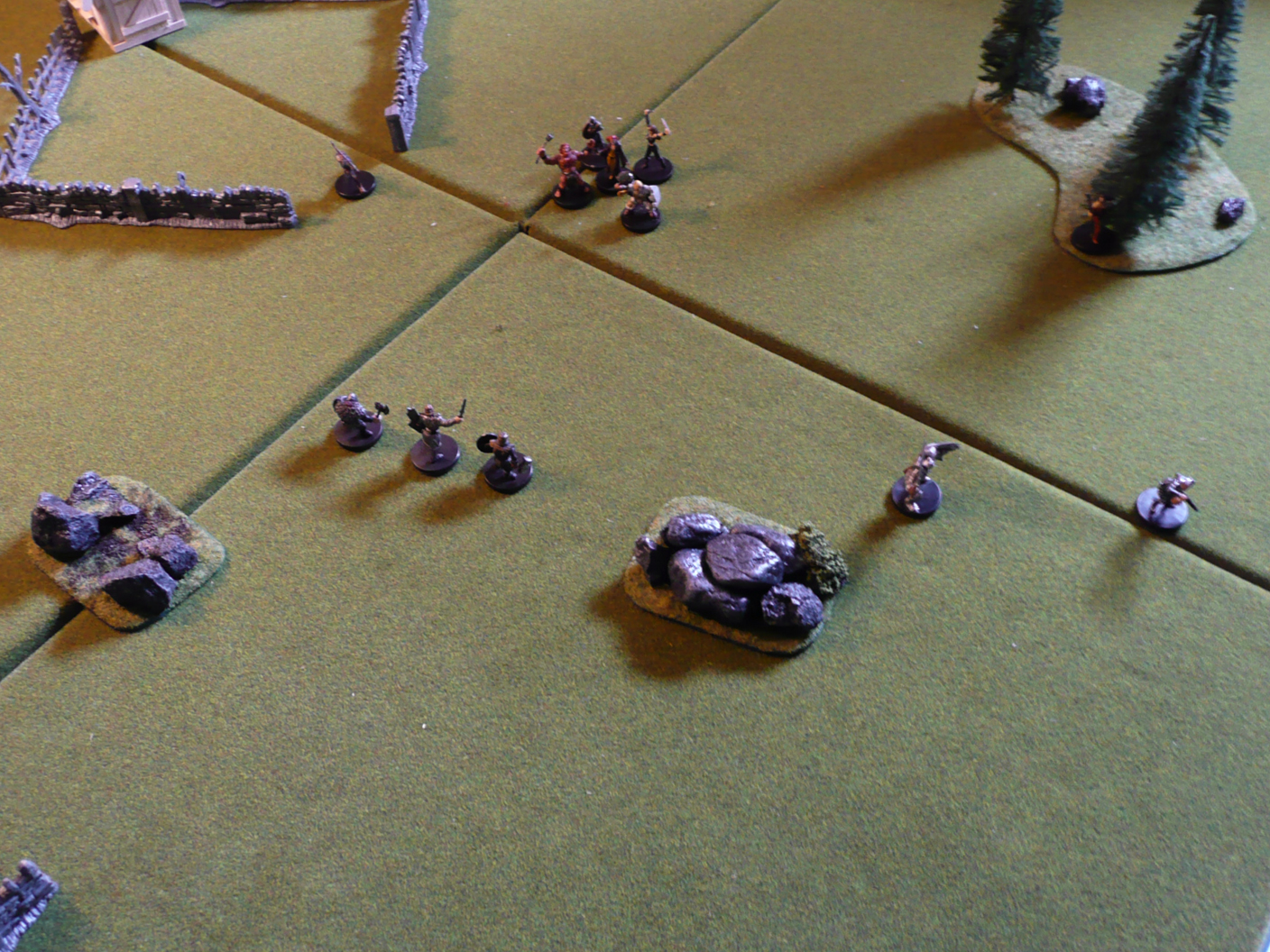 My first break came when Fredrik advanced with Tora and failed activating any other characters. I attacked her with Khwair and Husk, who managed to bring her down. Tibor moved in for the kill, abandoning the assault on Blink who had camped out in the woods stand but ran out of arrows. 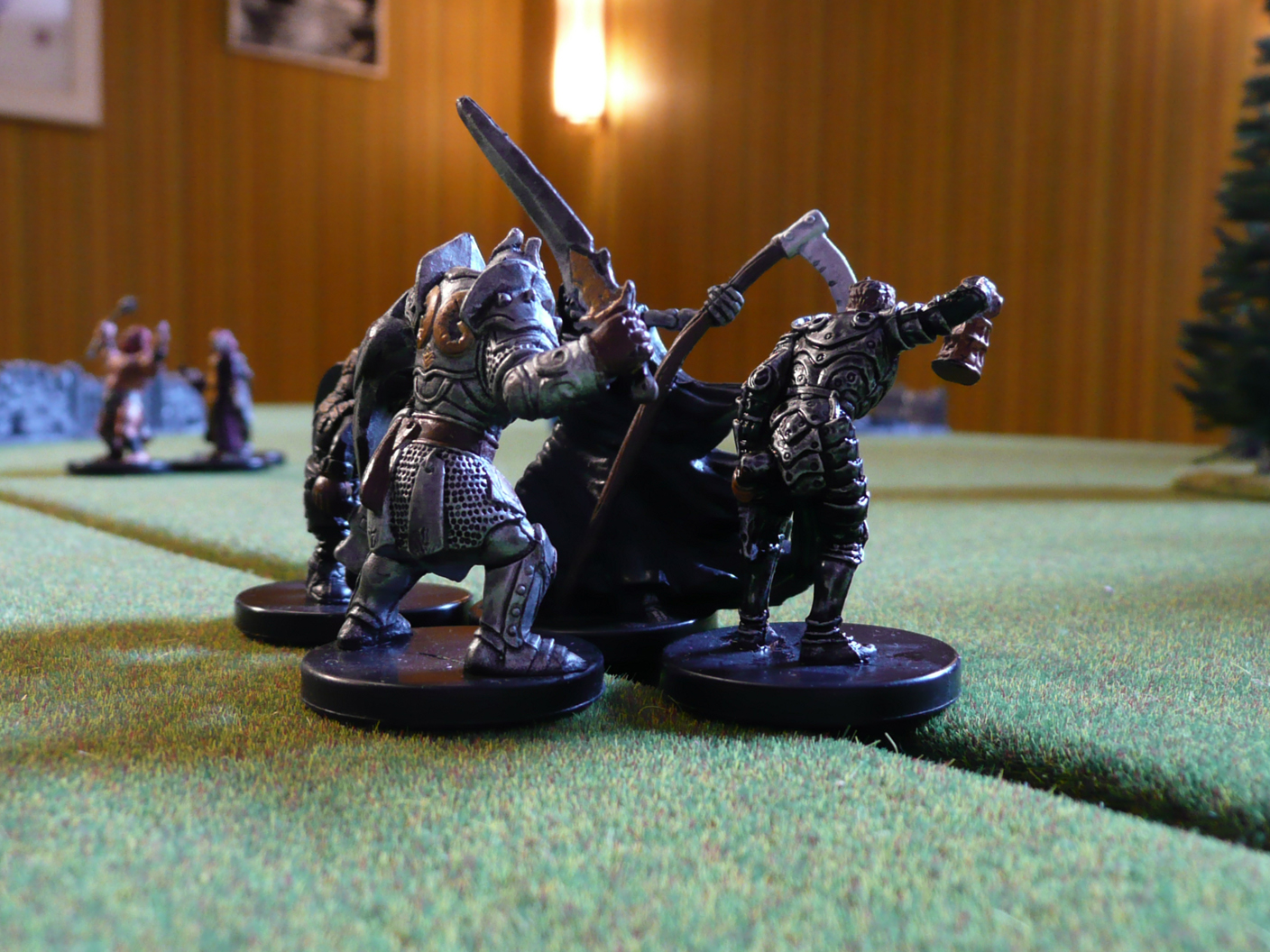 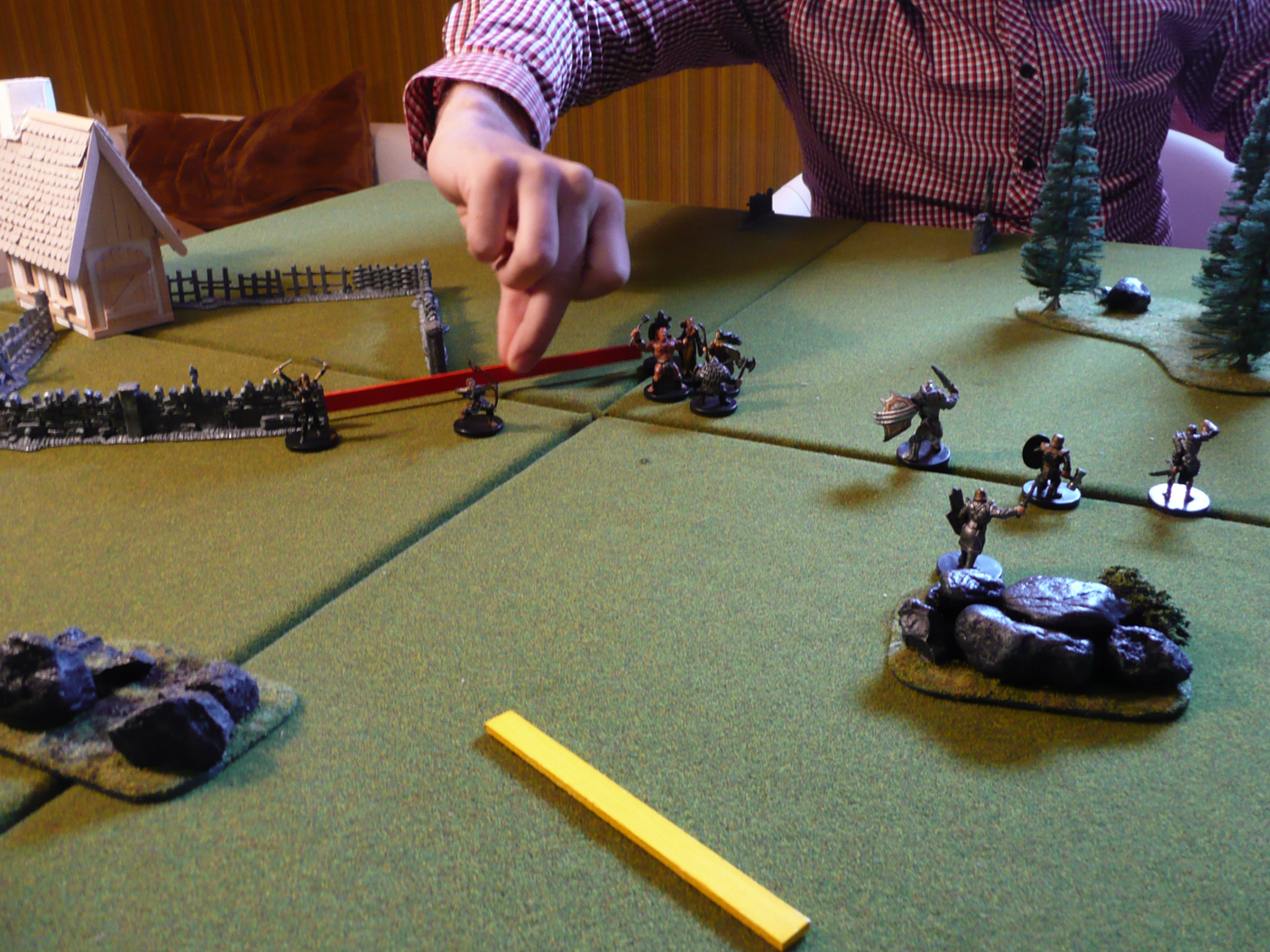 Fredrik tried to move around my left, attempting to get at my leader while I wheeled around to the right trying to do the same. I did a lame attempt at attacking with Kiruk, but he was quickly slain. Fredrik then advanced towards my hero Husk and disposed of him too. At this point, I was about ready to throw in the towel. 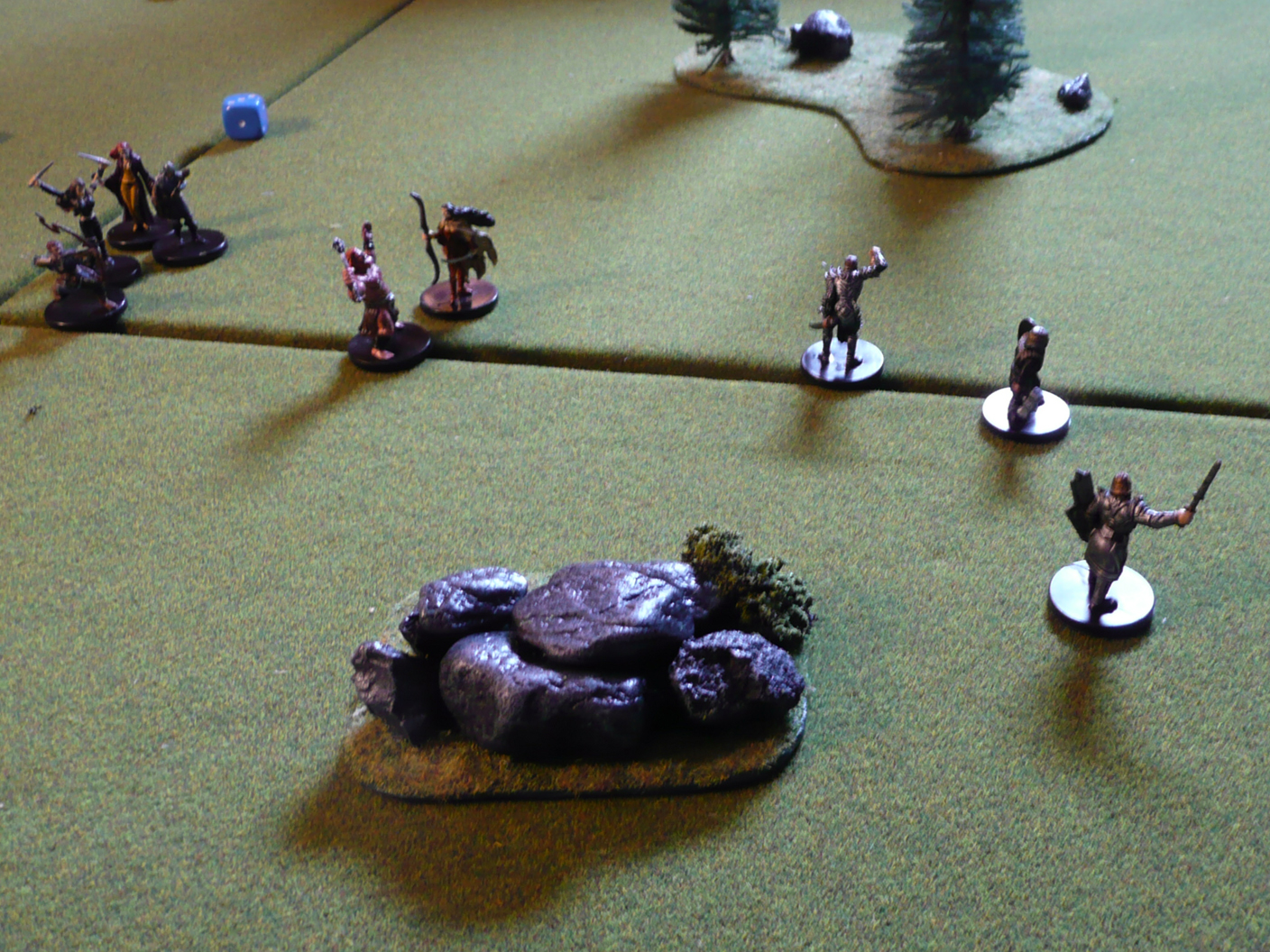 After this, things kind of went bananas. After a failed attempt where Fredrik assaulted Tibor (my human warrior), I managed to turn the tables. Tibor killed Darkhölme (who had been very passive the whole game). 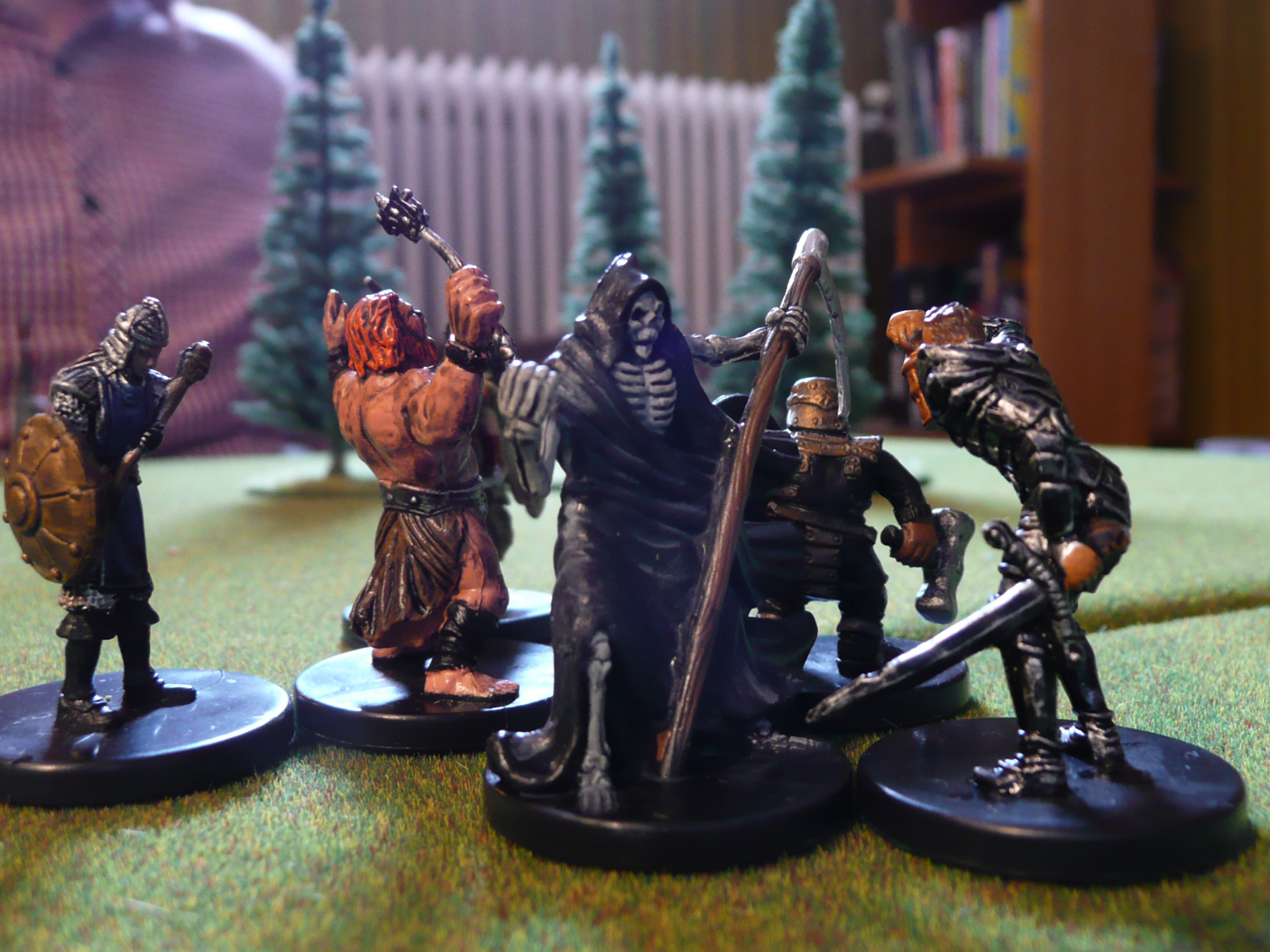 Hawkins and Khwair came to Tibor’s assistance and together they brought down Creed. Fredrik countered by taking out Khwair who had been transfixed by Summer. 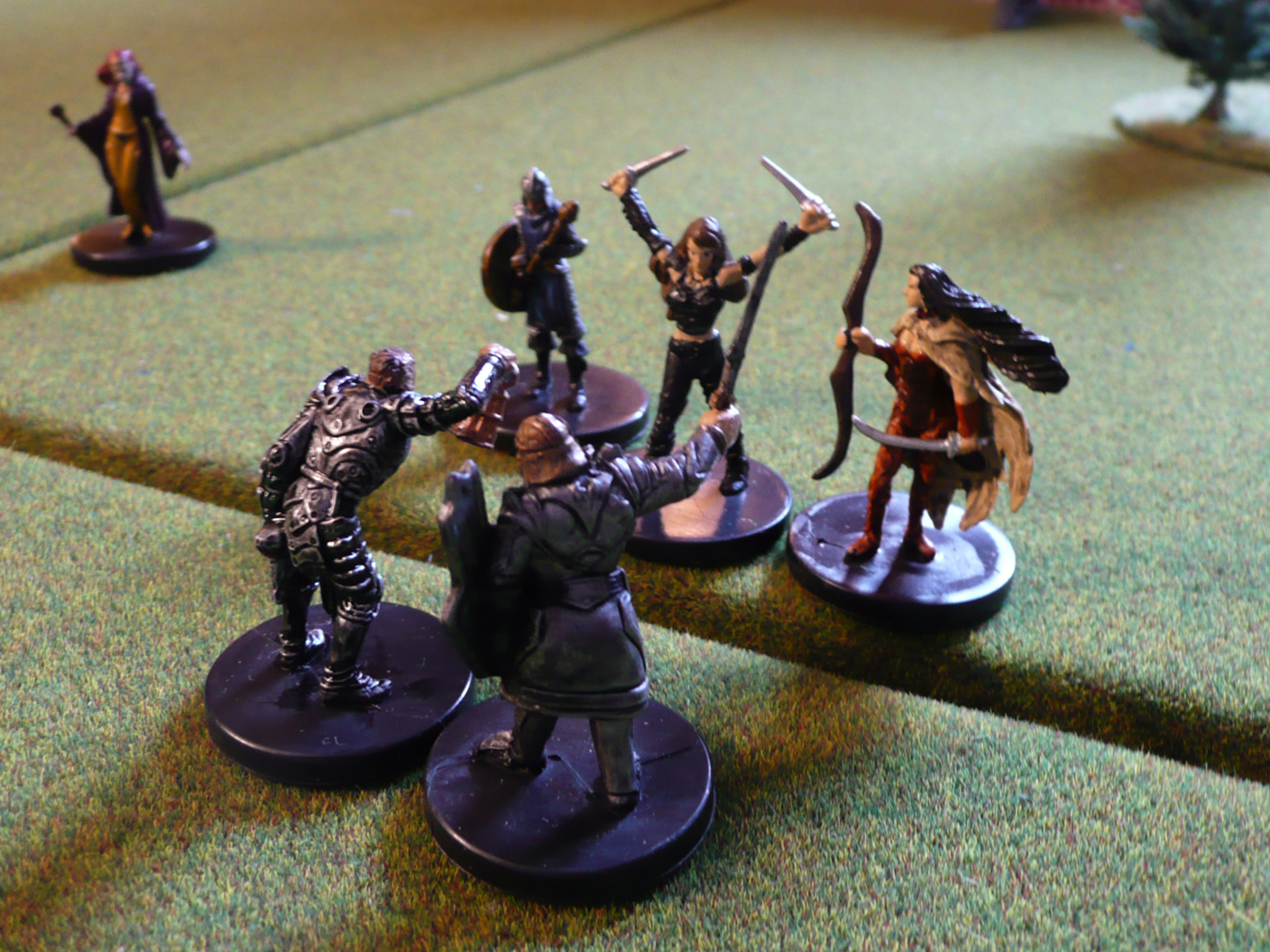 Free to move, with no adjacent enemies, my two remaining warriors attacked and took out Summer. This sent the three remaining characters in Fredrik’s warband fleeing. 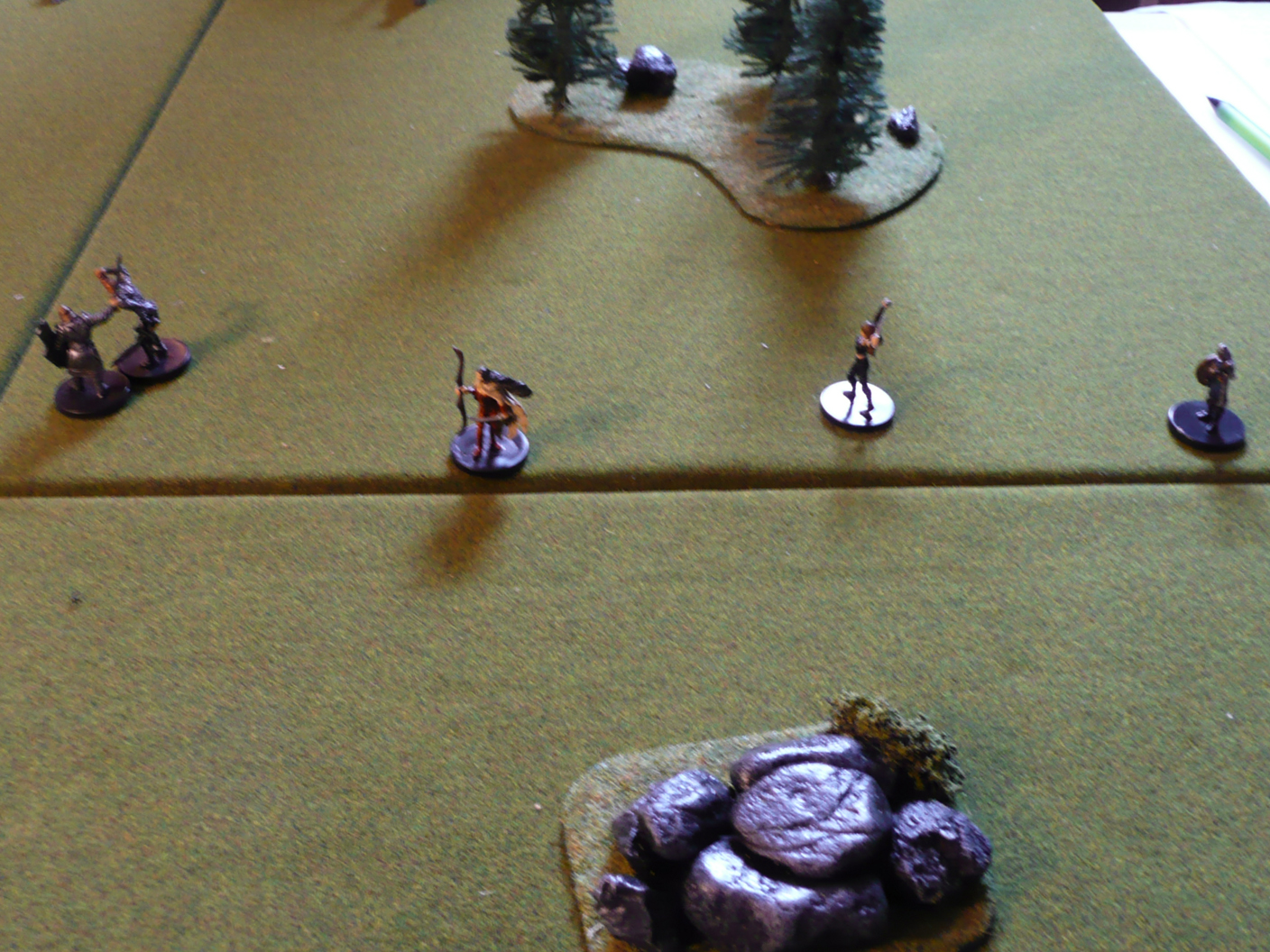 The remaining melee was a bit long winded. We traded blows back and forth, wittling away the numbers on each side. Finally, only my leader Hawkins and Fredrik’s leader Catherine and her companion Blink were still on the battlefield. Things looked grim for Hawkins, but with determination and a hefty portion of luck he managed to turn the tables. From total despair a few turns earlier, he was the last man standing and could head home with the two talisman pieces! 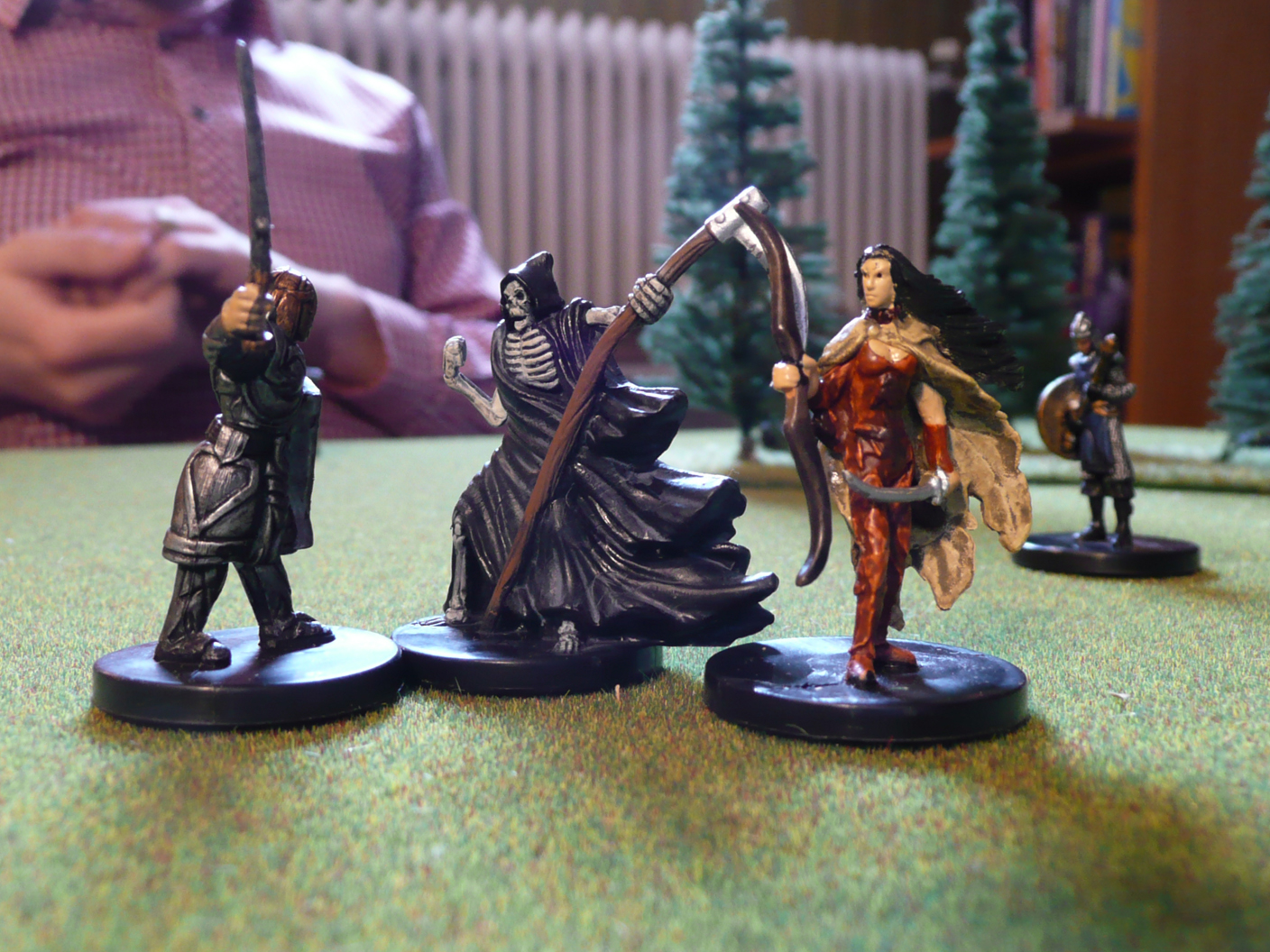 All my characters recovered fully from their injuries, except Kiruk who went on to the next battle with a temporary decrease to his Quality attribute.

I’ll continue tomorrow with a (shorter!) write-up on the second scenario, where Hawkin’s brave band is waylaid by a foul band of troglodytes. 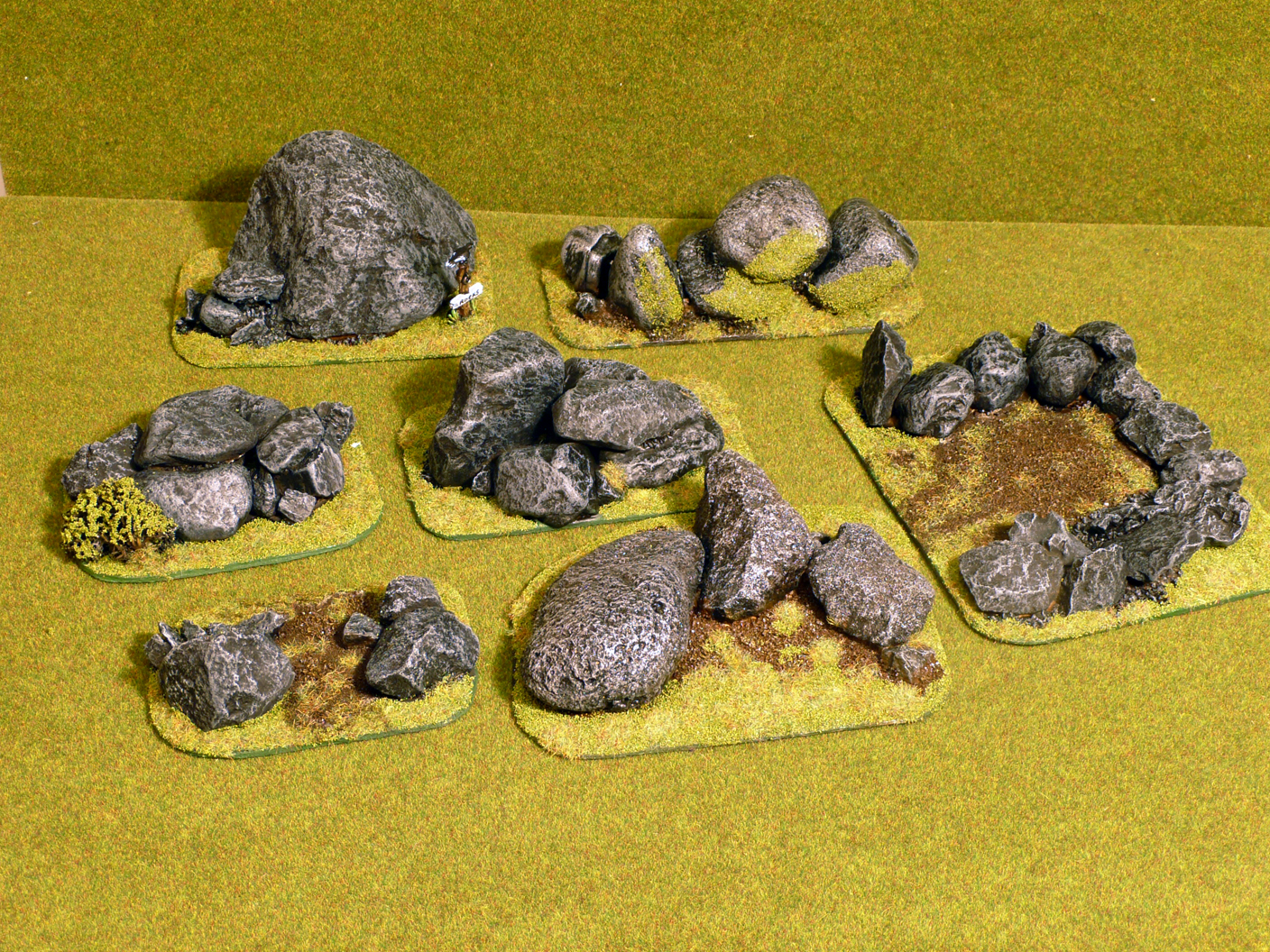 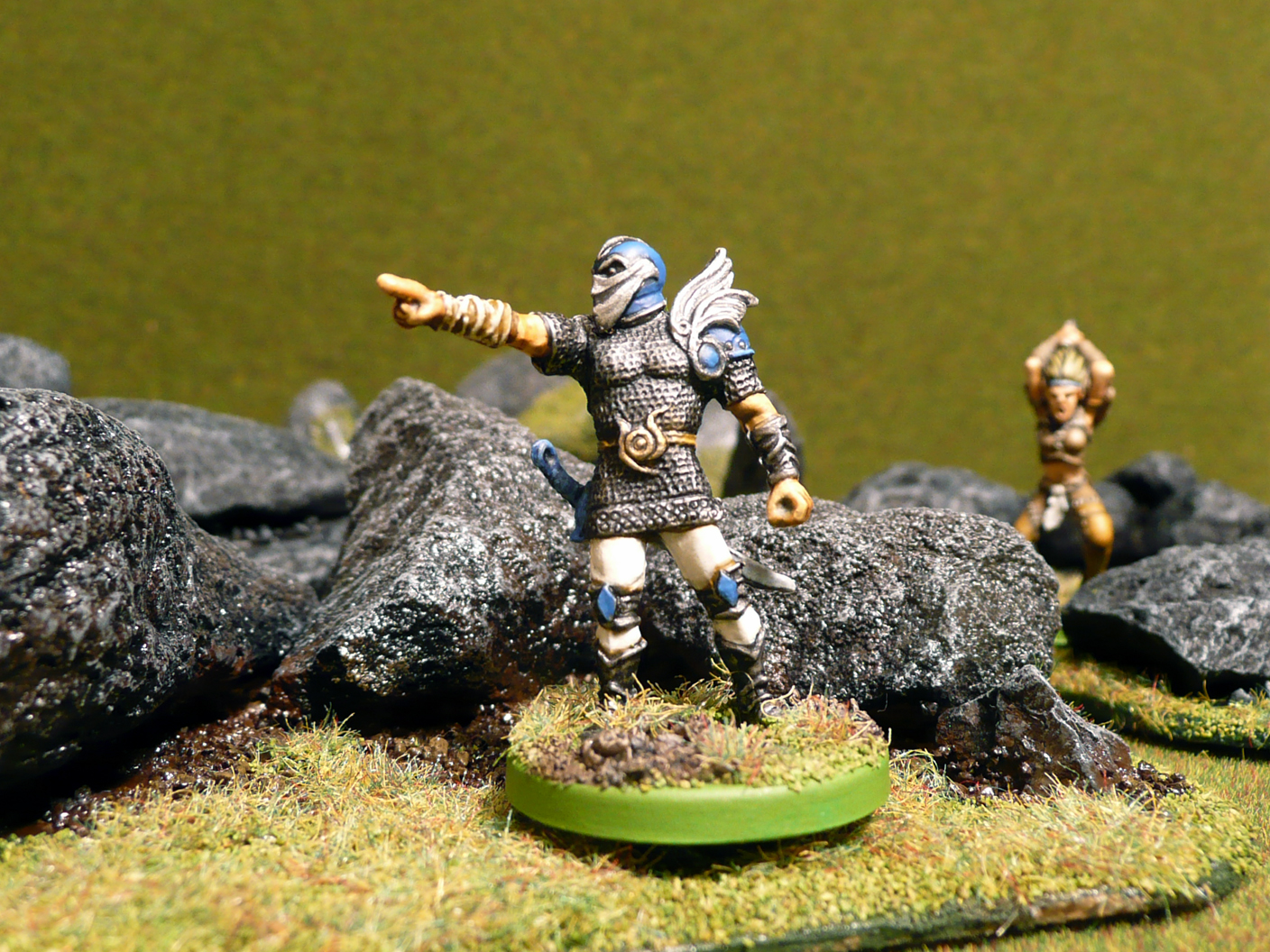