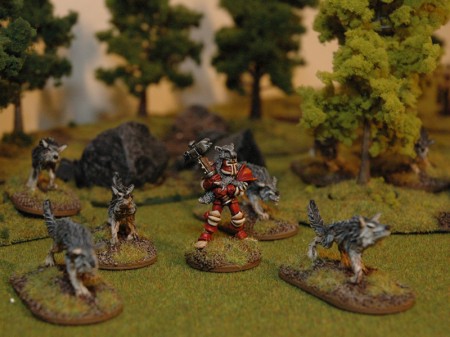 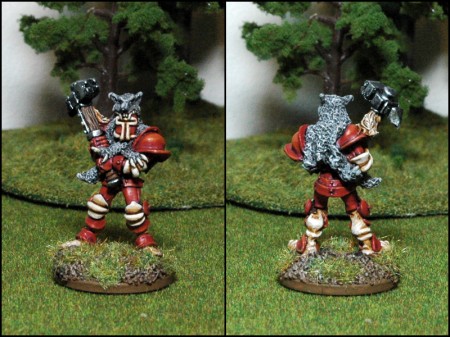 For a while, we’ve been talking about how an SBH game with nothing but zombies on one side would play out. About a month or so ago, we decided to do a trial game. With the rules as written, it would be near impossible to do anything reasonable. We noticed several issues, mainly with morale of the zombies but also with activation.

The biggest problem is logistical, though. It takes quite some time to roll activations for 38 zombies! To get around this, we agreed that all zombies more than a Medium range from an enemy could be batch-activated. I had one dice for each zombie, put them in a plastic container and rolled all of them in one go. I then assigned the successful activations to the zombies I wanted to move, alternating between the front ranks and the back ranks.

Another change we made was to the morale rules. A zombie witnessing a gruesome kill would have to succeed with ALL three morale dice to not be instantly destroyed. That simply wouldn’t work. One of the first kills was a gruesome kill, and it took out 10 zombies. We decided that for this scenario, all zombies would have to count as fearless. As we didn’t want to remove the effect of a gruesome kill completely, any zombies within a long range are “stunned” one turn for each failed die in the morale check. We played this game prior to the first Stillburg game, where we tried a different approach. Haven’t decided which to use in the long run.

Prior to the game, we also changed the stats line of the zombies. Instead of Q6, C4, Undead, Slow, Short Move at 8 points, we instead went with Q5, C2, Undead, Slow – still at 8 points.

All changes were made to emphasize on what we feel is the strongest point of zombies; numbers! With a higher Quality, Medium move and the batch activation rules we could make the zombie horde maneuverable but with a fairly low Combat.

We also used the modified turn over rules as described in our house rules.

So, on to the actual game. Here’s a summary of the scenario rules:
* Zombies count as having Fearless
* Zombies within movement range of an enemy model must be activated individually. All others can be batch activated; rolling 1D6 for every model, allocating half of the successful activations to the front rank and half to the back ranks.

The goal of the scenario was for the villagers to fend off all zombies. The zombies had no goal, other than to devour any and all brains on the board.

My warband consisted of 38 zombies, with stats as mentioned above. As I don’t own 38 zombies (yet), we had to settle for proxies on some. 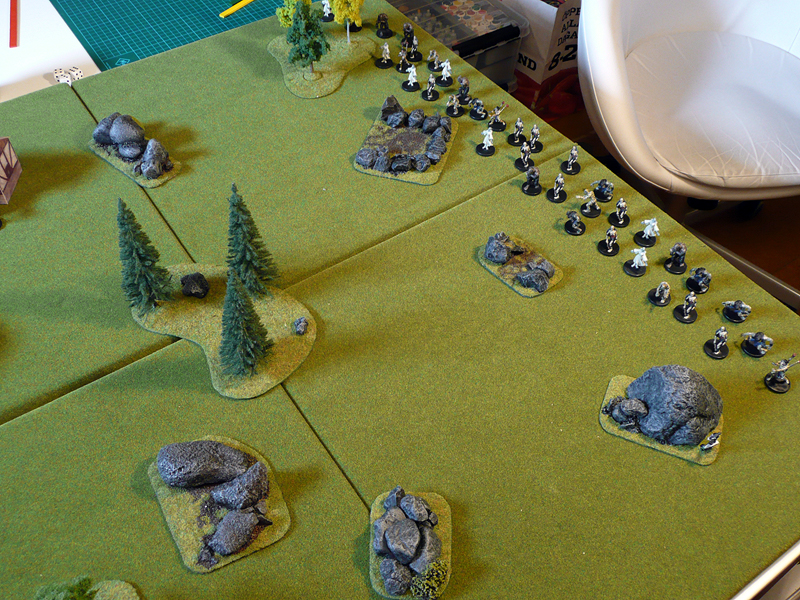 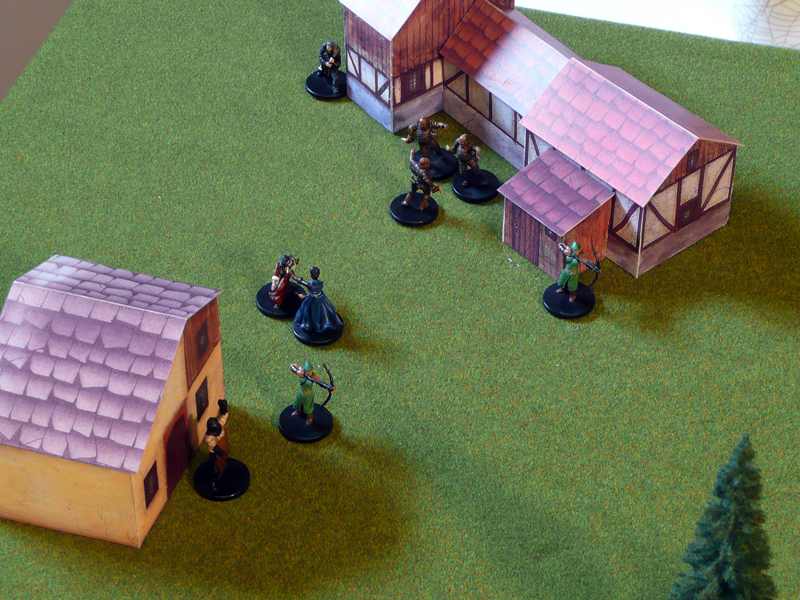 This is an overview of the setup, prior to turn 1. As you can see, for this game we used only plastic pre-painted D&D miniatures. I’m working on building a collection of painted Citadel vintage miniatures but the D&D minis are great for one-offs! 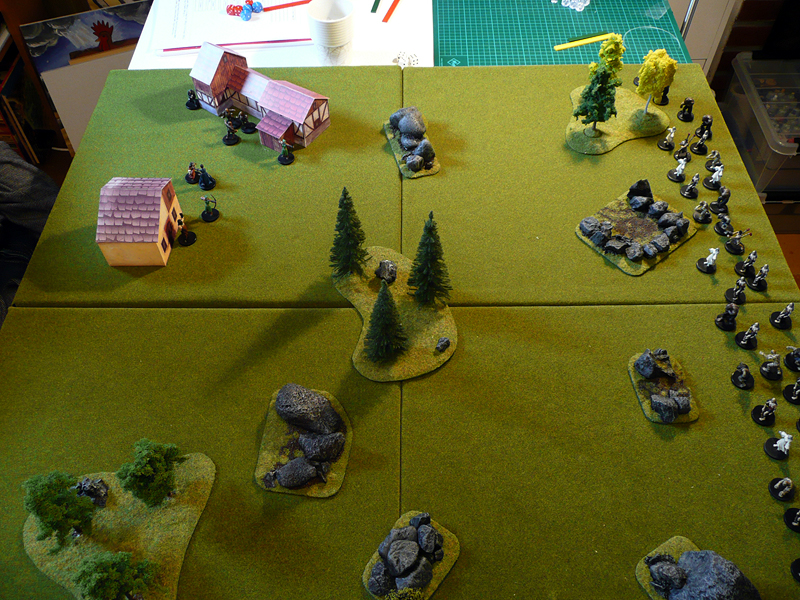 The two first turns were fairly uneventful, I won initiative and went first with the undead. The villagers spent their turns positioning themselves while the undead horde shambled forward. A few pot-shots were taken by the archers, but they were very ineffective. 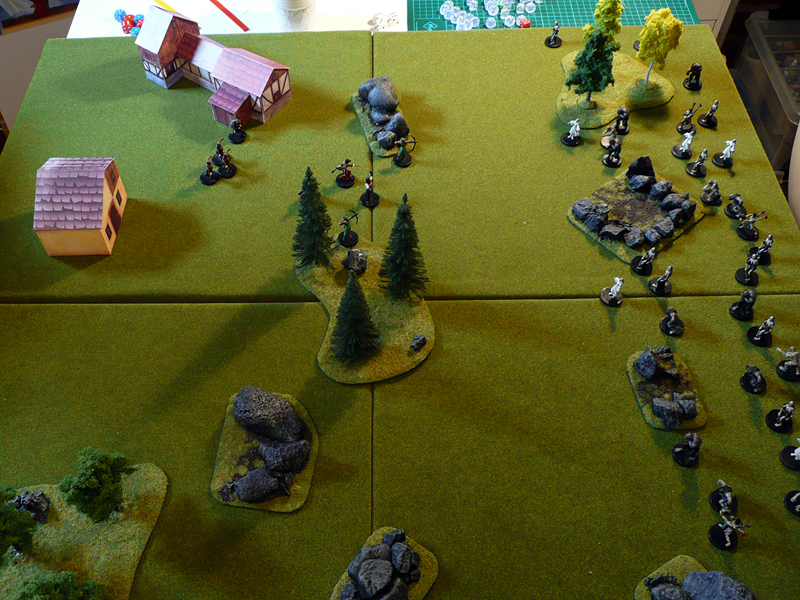 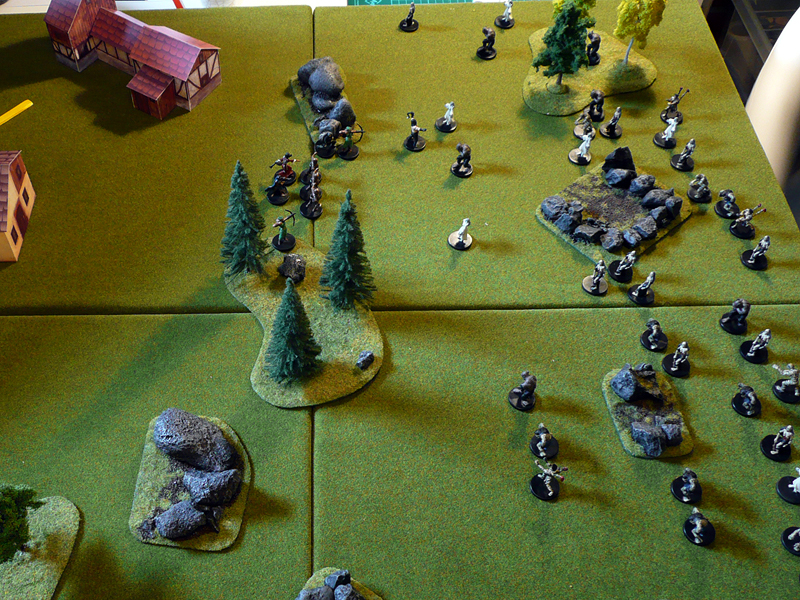 In turn three, the first casualty was suffered by the undead. The berserker scored a gruesome kill and almost a third of the zombie hord was stunned. 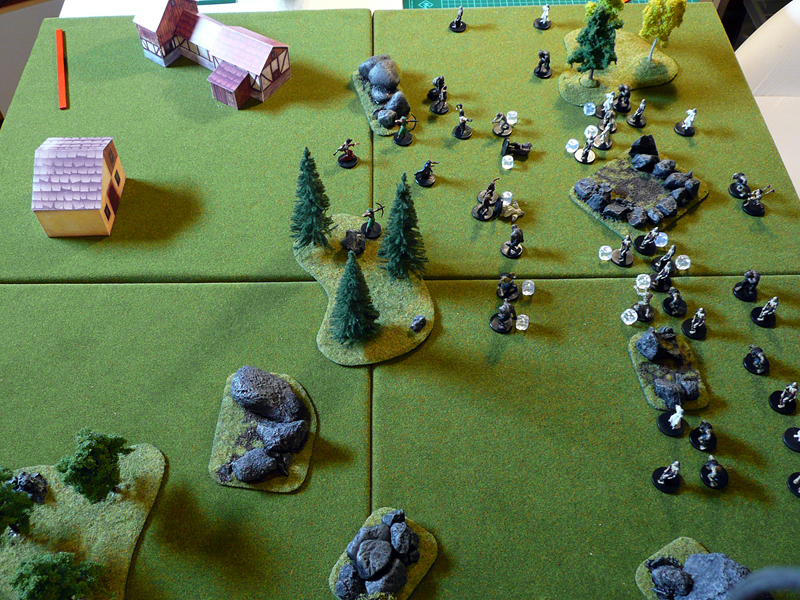 It looked like this would be a walk in the park for the defending villagers, who got cocky and took on a more offensive role than I had anticipated. Slowly, the undead wittled away. The occassional scare occurred, when the undead managed to attack and a villager fell – but they survived and could recover and fight on. 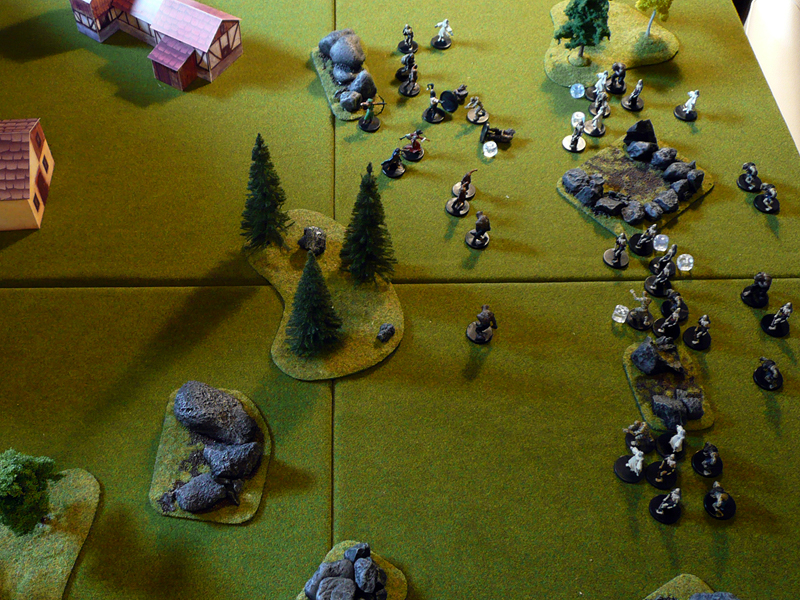 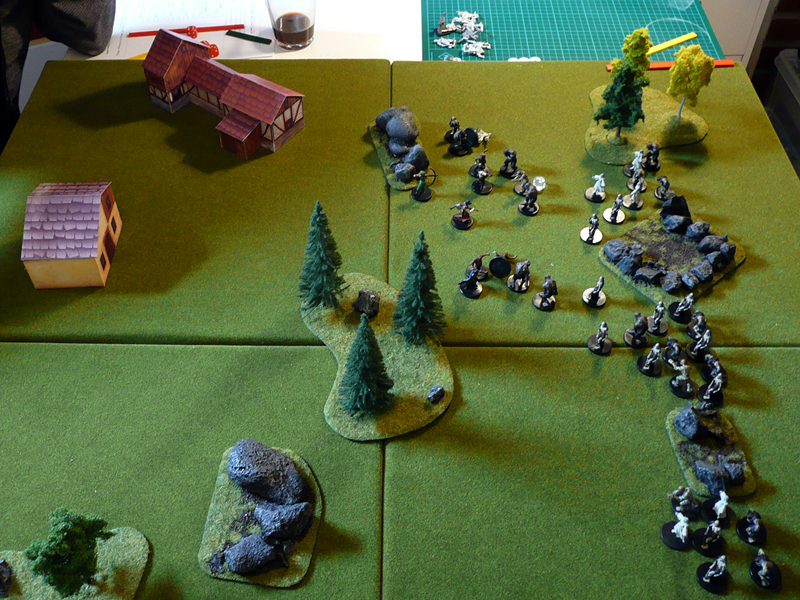 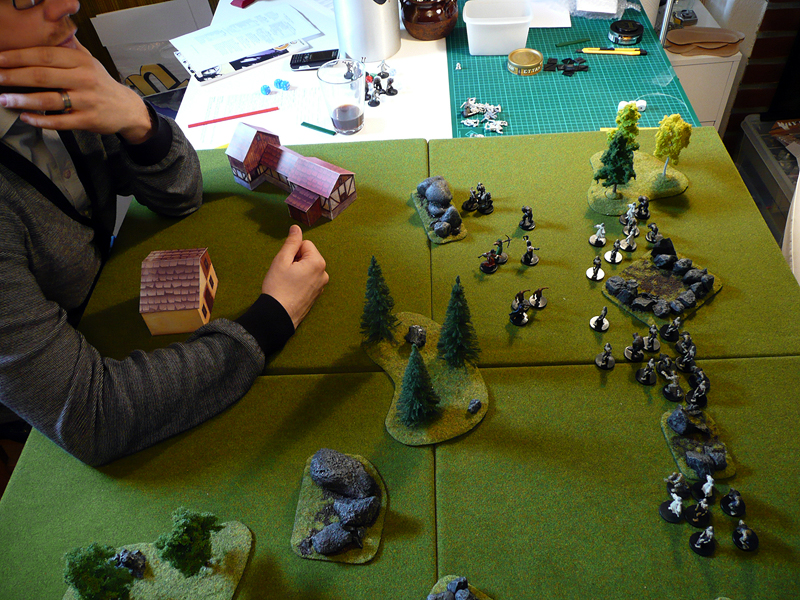 In a series of unfortunate events, it all turned though. With two unlucky and early turn overs for the villagers, the undead could advance en masse. They gathered around their victims and the first casualties were a reality. A poor drunkard had been completely surrounded by the walking dead, and suffered horrible (but not quite gruesome) death. However, when the thief fell and the flesh eating abominations descended on him, the majority of the villagers retreated. 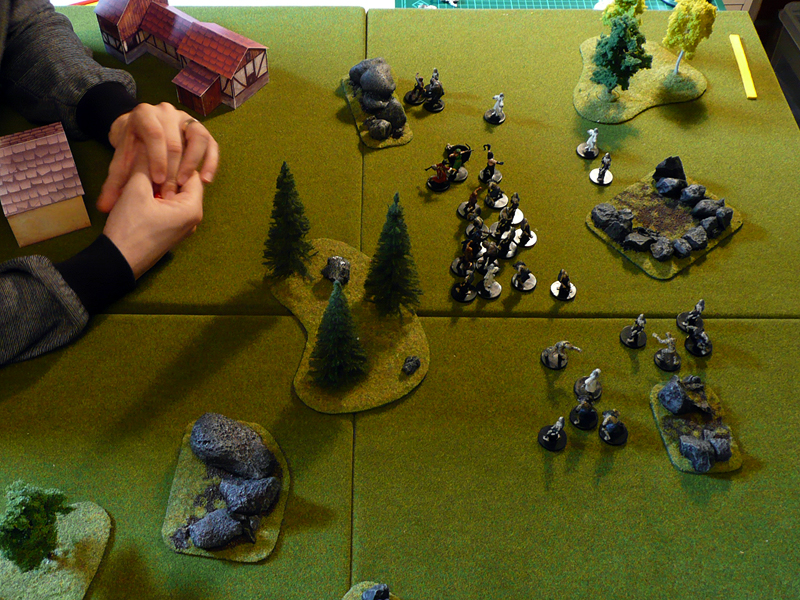 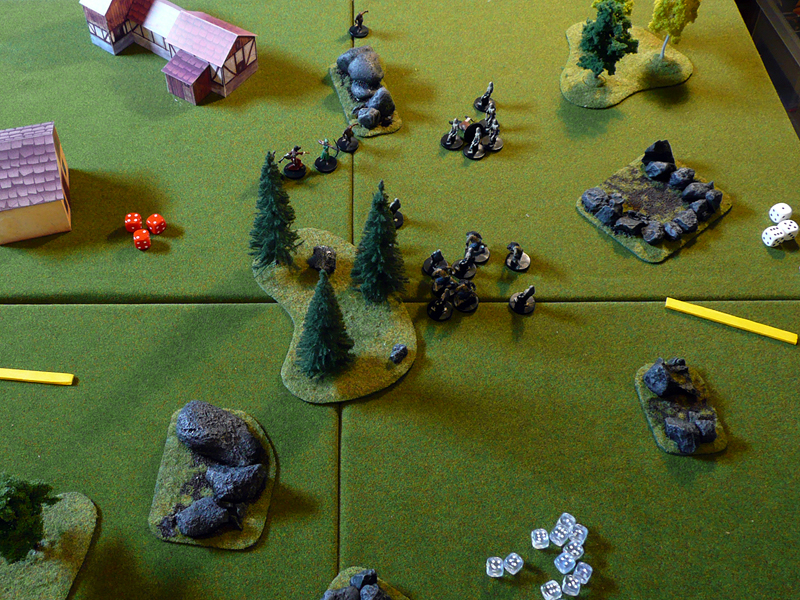 At this point two villagers had perished, while only fourteen zombies remained! The berserker (the town’s resident torturer – no village should be without one!) was fallen and surrounded and would most certainly be devoured in the following turn. Unfortunately, we had to end the game at this point due to real life commitments (curses!) but such a great time was had that we’ll replay it (with some changes) as part of the Stillburg campaign. We’re also planning to do a Mutants and Death Ray Guns variant of it – if we ever get around to that system and setting. 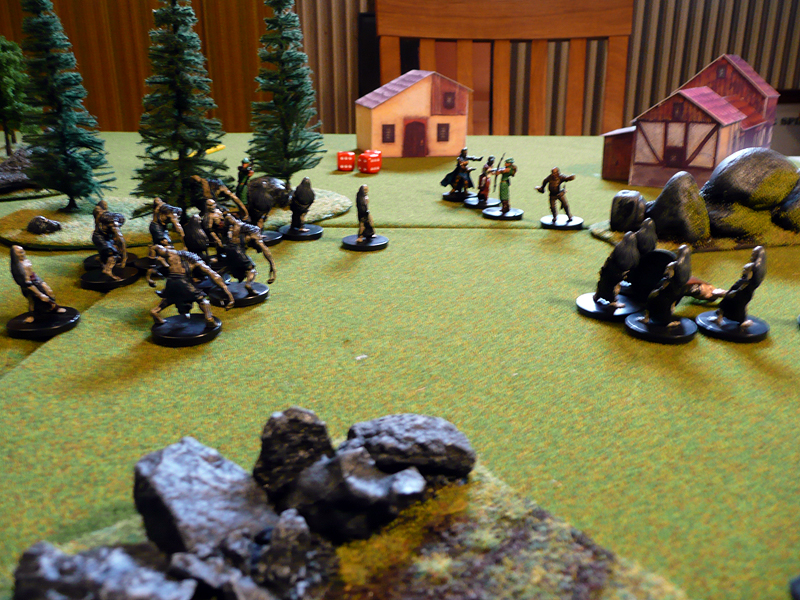 So – any Jerry Springer-like conclusions? Archers are ineffective against undead. Savage on the other hand is very effective, even more so when it stuns everything within a long distance. The game was defenitely not close – I’m sure the villagers would’ve been able to fend off the undead. The question is at what price. The stunned change to the undead worked very, very well! As I had one die for each undead model, I just picked a die from my dice bin and put it next to the stunned model as a marker. When a zombie was destroyed, I removed a die from the bin. The batch activation worked ok, but the rules for it are too fuzzy would break if any of the players is a rules lawyer or power game. Please let me know if you have any better idea on how to handle it, there’s an excellent comments functionality that no-one but Paul is using! =)