I suppose most people reading this is familiar with Abdul Goldberg. If not, let me Google that for you. A while ago, the Emporium of Rogue Dreams (on Facebook, that) joined in a collective challenge to create our own visions of Abdul Goldberg. I must be honest and say, this isn’t really my vision of Goldberg… it’s a bunch of stuff that I managed to fit together and shoehorn into the assignment. It’s ONE interpretation of Abdul Goldberg. I could make many more. So… who is this Goldberg, then? 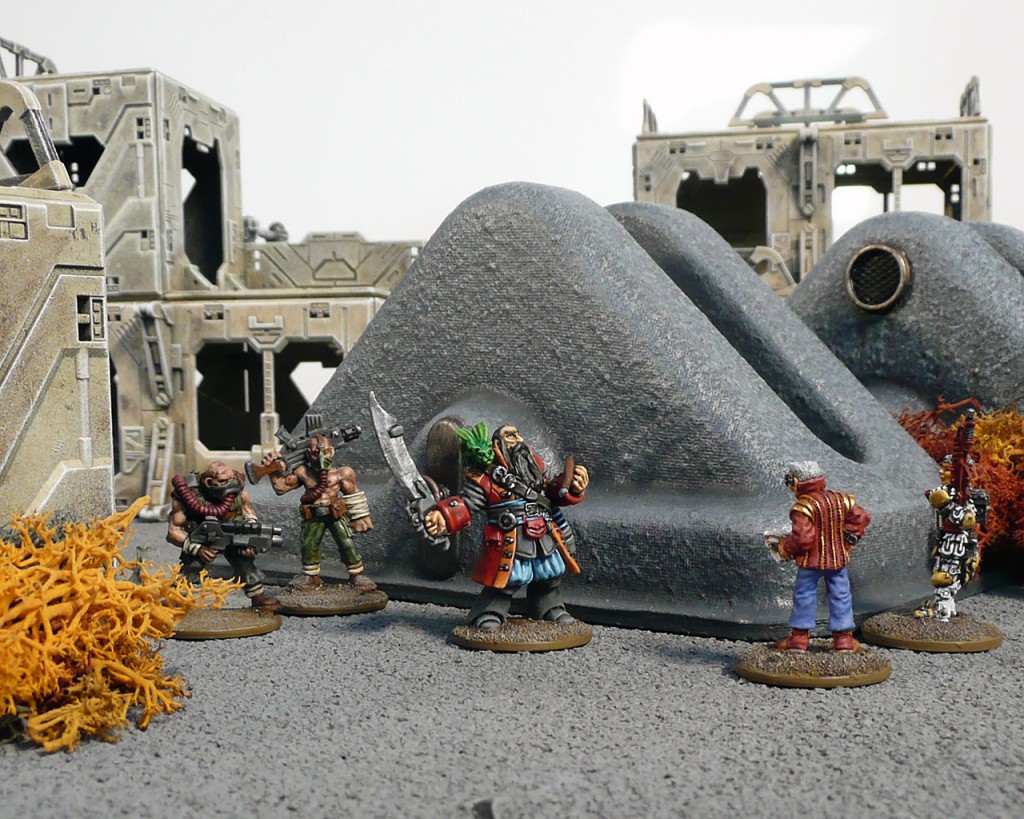 It’s simple, Paulie. Hand over the datafax and nobody gets hurt.

Abdul Goldberg, huh? Let me tell you, that guy is as oldschool as they come! He’s been around as far as I can remember – but don’t let the outrageous clothing and graying beard fool you. Goldberg is not to be trifled with! While not completely without scrouples, in his days he have widowed more than he have wed. Those guys all had it coming… mostly.

I’ve always said it’s a blessing he’s a good guy at heart. It’s more than can be said about that green beast perched on his shoulder. What kind of freak gyrinx have wings?! An evil, vicious, insidious and utterly soulles bastard of a gyrinx, that’s what kind.

Gotta say though – since he settled down on McKemmler IV it seems like Goldberg found some sort of peace. We don’t run accross him as much, his crew isn’t jacking shipments or blasting other outfits the way they used to. I don’t know – maybe he’s planning something big, rumour has it he’s working with The Blacksmith… or against him. Blazes, I even heard some people claim that Abdul Goldberg is the freaking Blacksmith. Ha! 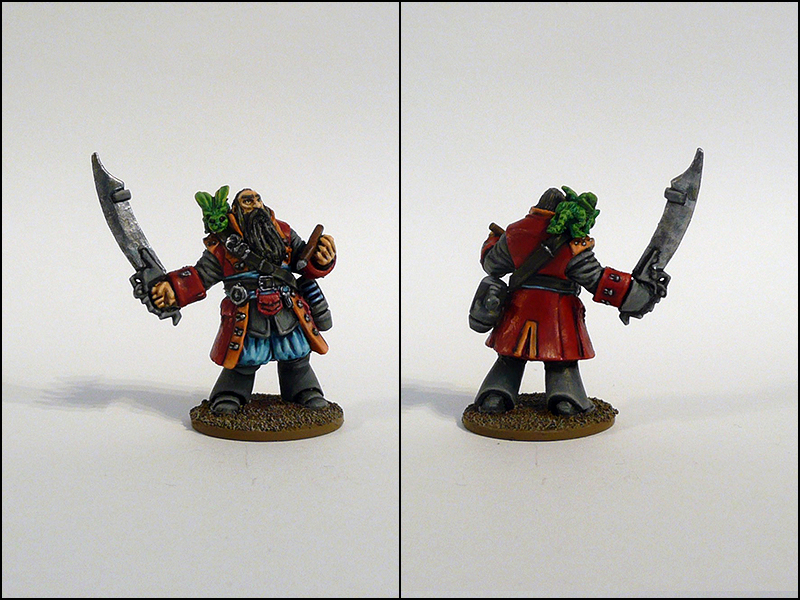 With not much of the deadline left when I started the task, I first opted for a classic Rogue Trader figure without any conversion work… but I have had this idea about converting up this Reaper Bones pirate into a rogue trader.  I thought he’d fit just fine as an Abdul and sat down outside with a cigar and my (rather paltry) bitz box. 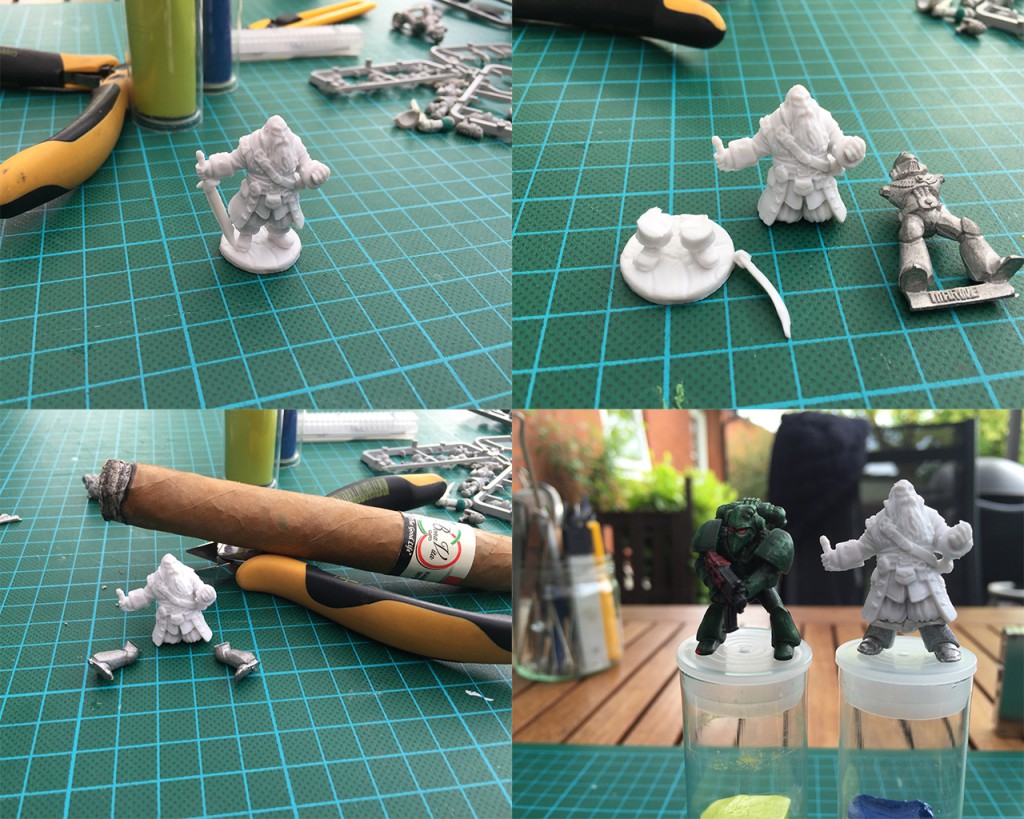 It started with a Reaper Bones Barnabus Frost model (see top left above). To space him up a bit, I figured he could use some Space Marine legs so out came the 90s marines I haven’t been able to flog for more than a year (top right). A few cuts and snips, and I found myself with the beginnings of a slightly dismembered rogue trader.  To see if it’d work, I used (white) blu-tac and a RTB01 beakie for reference (bottom right above). I was pretty satisfied with where I had gotten in about an hour’s time (which mostly consisted of humming and hawing). 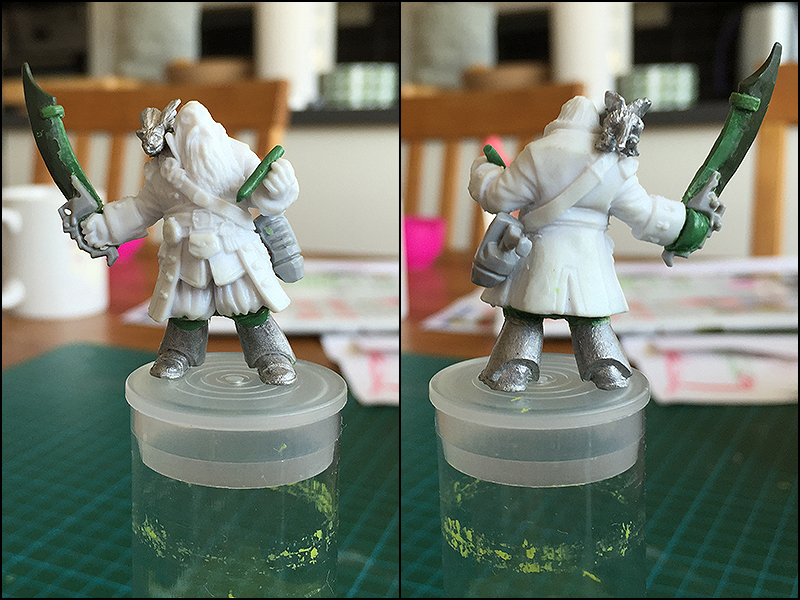 I then continued with adding bits and pieces, and I even got to break out the green stuff. I’m not very experienced with green stuff so it’s always a bit disconcerting. But things turned out pretty fine… Here’s a run-down of the other parts used: The sword blade of an Hero Quest goblin, a plasma pistol and a power sword hilt from the old Ork Heavy Weapons sprue, and a bat-winged cat from Axiom/Jon/Beastface Miniatures. Finally I greenstuffed a cigar, knee pads, some details on the sword and a handguard to strengthen the joint where sword blade met hilt and hand.

The finishing touch to the competition entry was to stat the guy up in Rogue Trader. It was pretty straight forward stuff. As I’m not a grizzled veteran of RT, I only used what I could see on the model – with the exception of some smoke grenades that I figure old Abdul carries in his fanny pack if ever he needs to hastily abscond with some loot or other. 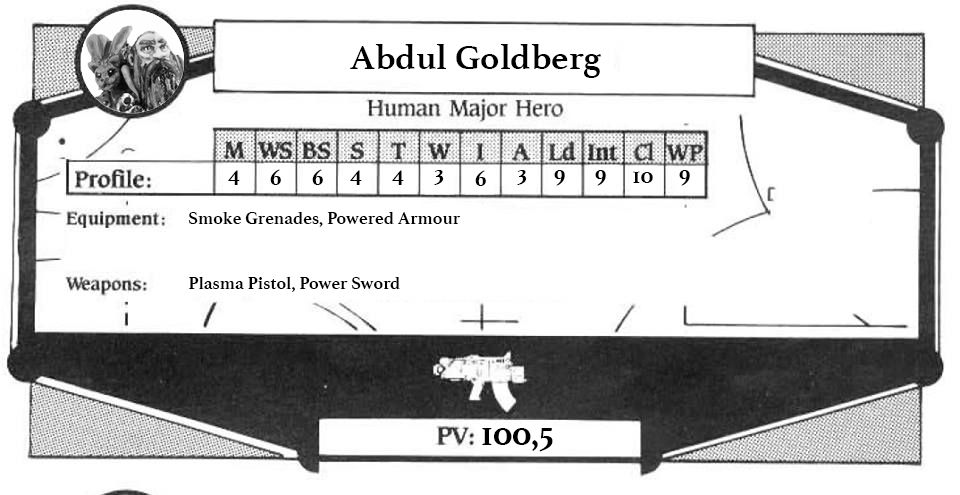 Yeah, I know – it’s not “legal” with a Cool of 10 if the model isn’t a psyker. I’m pretty sure Abdul don’t care, and neither should you…