It’s taken me a while, but by golly I did it – I’ve posted 100 posts here (that’s counting the posts migrated from the old blog too). To celebrate this, I will share some photos of where I was at a few years ago, when I played my first game of Song of Blades and Heroes. It really marks my return to the hobby of miniature gaming. After that, I started collecting metal miniatures again.

Our first game was played in november 2009. We used prepainted D&D miniatures, some terrain I had just gotten started on (still have not finished neither hill nor house). I had purchased and assembled a single GW gothic wood thingy, it too languishes unpainted. Some WOTC D&D tiles helped give the landscape some colour. 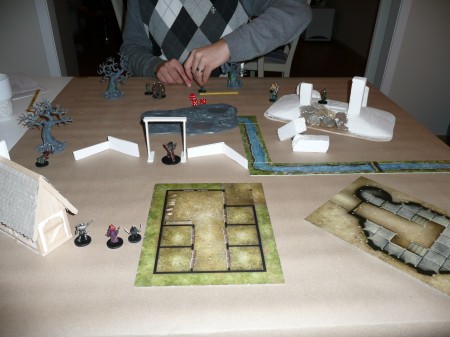 The game was a blast though, and we tried to get some more in as soon as possible. The next session was in mid december, 2009. Things have shaped up somewhat, the brown paper surface is replaced by a Citadel Battlemat. I’ve started building some rocks and repainted two D&D minis. 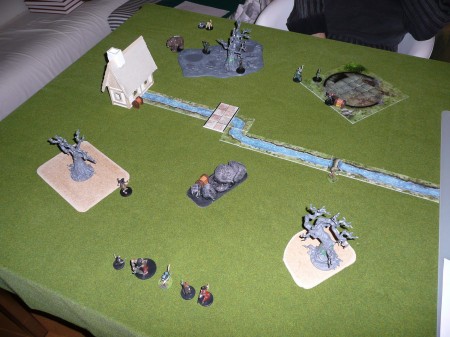 A week later we did our next sitting. This time, we did several scenarios in a day and I had also finished some of my rock pieces and started building some more. 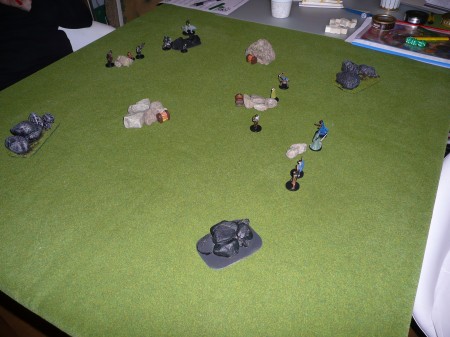 That way is much too rocky…

A few months later, late february 2010, I had put my christmas presents to good use and finished a few stands of wood and even more rocks. Things are really shaping up now! We played a series of linked games with a sort-of narrative. The battle reports are actually published here under the Pyramid Campaign tag. 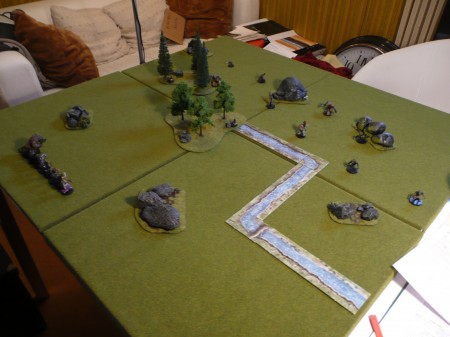 Only finished terrain, for the first time!

In may 2010, I married my wife. More importantly, a week later I played a rather stonking zombie game in which we used my first Citadel Townscape buildings! Yay! There’s a report of that too, right here! 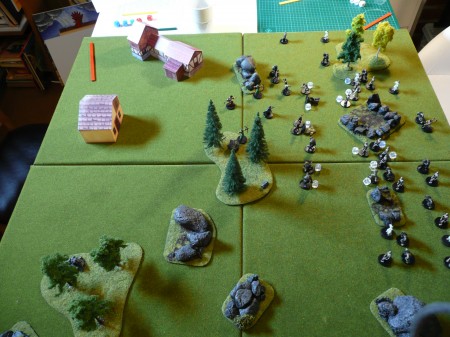 In july 2010, an epic mile stone was reached. We played our first game with metal miniatures fully painted by yours truly; the first scenario in our Stillburg Campaign! Here’s the write-up on that. 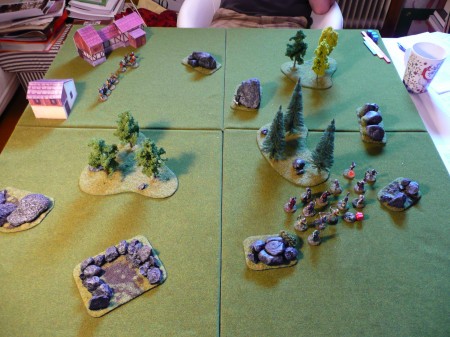 The most recent game was more than a year ago though… we’re hoping to remedy that soon – but I honestly didn’t think it was that long ago. I guess both me and my cousin marrying and having kids in the last two years sort of slowed the momentum a bit. Here’s the third game of Stillburg goodness, played in early december 2011. Battle report more recently posted here. 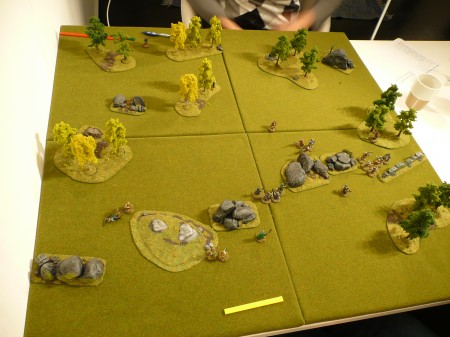 Inaugural game of the refurbished man-cave!

Granted, we have played a few games every now and then. For instance, we met up in september to have a short go at Cavern Crawl from Funghy Fipps. No post on that, but here’s a photo from the evening. 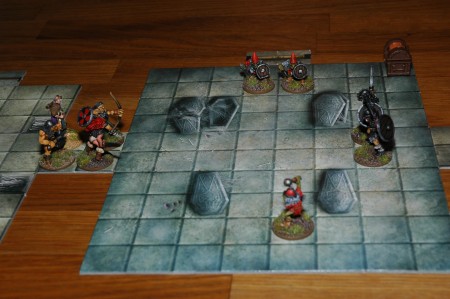 Looking back, it’s quite amazing what can happen in just a few years. The blog opened up in february 2010, the first post was about me completing the rocks. If anything, this blog and the LAF forums have been the driving force behind my hobby endeavours. It’s painfully obvious that I’m not doing this for the games we play, as we hardly ever play any games. The worst part is, I really want to have a go at War of the Ring again – it’s been several years since we played that. Or what about Hero Quest. Haven’t touched that since 2009 either. Haven’t posted about it here, but I did a pretty serious DIY copy of it, including custom cards and a metric fuck-ton of D&D plastics that cost me a small fortune to get multiples of some rather rare models. Here’s a pic of a game in progress. 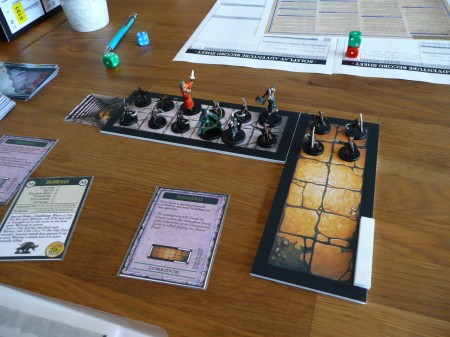 All these games go un-played though, as time and commitment is lacking. The main problem is my approach to gaming… I want to play games with my friends, people I enjoy hanging out with. I don’t really care that much about the game itself, it’s the socializing that’s important to me. I’ve tried playing in clubs and in-store events, but if there’s no personal relation with your opponent it’s just going through the motions without passion. I won’t waste time playing games with people I wouldn’t enjoy hanging out with under other circumstances.

Let’s hope there’s an abundance of gaming in store for me in 2013. I’ve recently come across a fellow gaming geek at my work place, whom I also share a lot of other things with. Unfortunately, for scheduling purposes, one of them is being a parent of a li’l un. So far, we’ve managed to get two games of Blood Bowl played, in about four months. Not bad, for old geezers!