This is a battle report of a Song of Blades and Heroes game I played with my cousin almost two years ago. Good thing I took good notes and plenty of out of focus photos! Re-shot the photos the other day, so here’s the report finally! If you missed the first installment of Stillburg, you can read that battle report here. We’ve played the third game too, and I’m preparing the fourth (got all the zombies painted up, thanks to the LPL). Hopefully it won’t be two years until I get the report for the third game up!

With the death of mayor Boismann, the heroes are not exactly treated as such in Stillburg. No matter how ill regarded his ways were, he was still a native resident of the town. None of the patrons at the local alehouse ”The Nag’s Head” seem to even remember ”good old Phoncible’s” conniving ways. Instead his heroic sacrifice is celebrated with ample amounts of drink and tales of how bravely he more or less single-handedly staved off the undead assault.

Awaiting an official election, the town’s constabulary officer has been appointed interim mayor. Albert Adlercreutz is quite the opposite of the old mayor, being righteous and just, always willing to help those in need. Thus he has offered his assistance to the surving heroes.

During the battle for Stillburg, brother Wendel sensed necromantic energies surging through the forests from the northwest. Its exact origins could not be determined, but the good cleric and Duncan will set out on a scouting mission to see if they can ascertain the source of the undead threat. Being hell-bent on vengeance, Aldor is joining them – as well as a few marshal men spared from town defence. Adlercreutz can’t join himself, as he needs to oversee the building of further fortifications in town.

As the heroes set out they are intercepted by “Crazy” Macy Sonnenshield, local kook and volatile crackpot. She claims to have seen undead scout patrols to the north and offers to guide the party to the location. Reluctantly, Duncan accepts the offer.

Following the trail of the undead, on their second day of travelling the heroes come across Badwater, a small abandoned settlement. It used to be a prosperous little town, before the orc raiding parties put an end to that. Nowadays, it serves as a hideout for all kinds of unsavory types.

When the heroes reach the top of a small hill looking down on the desolate village, Macy spots a lone man running frantically along the road to Badwater. Just when he disappears into the shadows among the houses, a small band of pursuers emerge from the forest across town. With weapons drawn they make a halt and their leader steps forward, angrily shouting alien-sounding gibberish.

Duncan excitedly whispers to his friends – “By Gadd, those are words of the possessed! Clearly they are servants of Chaos, seeking to corrupt yet another poor soul. We must go forth to cleanse the tainted and…”

While making their way down the slopes, Macy explains (with a smattering of profanity) how the fleeing man apparently has something in his possession that the pursuers want. The Nipponese aim to retrieve it by force and bring it back to their employer abroad, accompanied by the poor man’s delicates.

Setup and special rules
Town-square with a forest stand in the middle. Deployment on opposing sides; Samurai in front of the northern town entry point, Heroes on the southern hill.

6 counters are placed: 2x Ninja, 1x Fatgit Rumblegut, 2x Nothing, 1x Fugitive. They must be 2 Long from any character, and at least 1 Long apart from each other.

When a model is in base contact with a counter, reveal it and place the spawn (if any) within a Long, but NOT within a Short. Ninjas may spawn in base-to-base contact with an enemy within their spawn range, carrying out an immediate ambush attack versus that model.

When the Fugitive is spawned, all other counters are flipped and spawned accordingly. 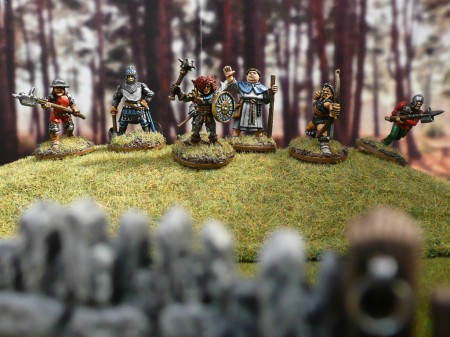 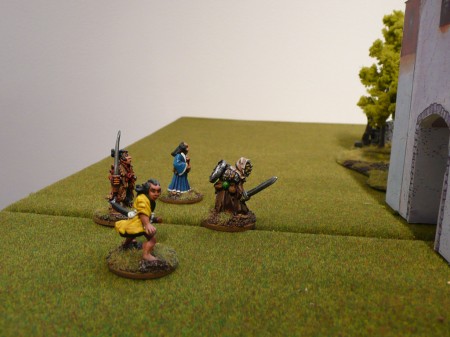 From left to right: Samurai leader, the two samurai and the half-orc guide Snivelsnout. Fatgit and the ninjas are all in hiding and not yet set up. 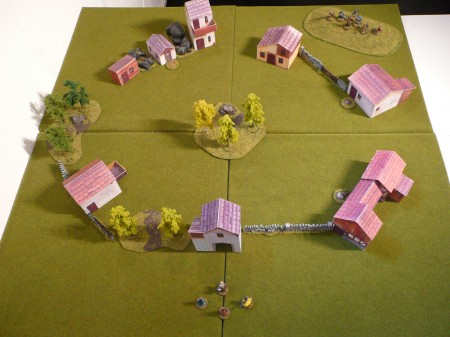 The setup before any moves have been made.

The heroes won initiative and moved forward to a low wall in pretty close formation, with two militia men guarding the rear (read: failing to roll more than one activation each). Macy scouted ahead, flipping the first objective marker of the game. As she crouched down to investigate some tracks, a warrior clad in black leapt silently from the shadows and attacked the forward-most militia man. The sneak attack made the militia man fall to the ground, albeit unharmed. 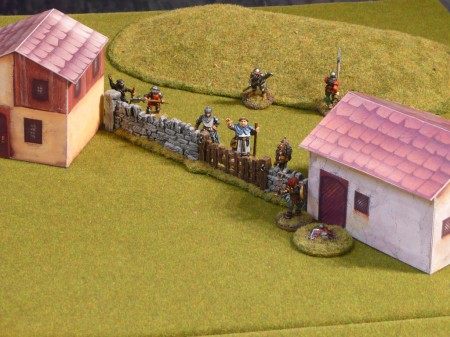 The Nipponese broke up and moved quickly towards two different objective markers. The samurai leader did not manage to keep up, but stayed within command range. 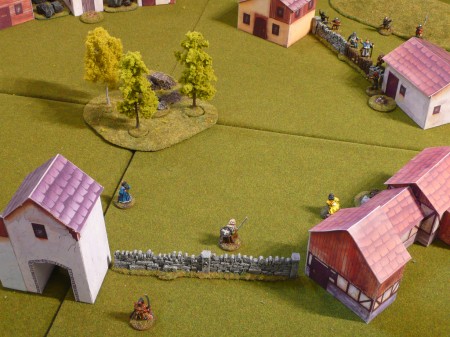 The next turn, the fallen militia man was joined by an ally and together they managed to put the ninja out of action, while the rest of the gang scrambled over the wall to join Macy. 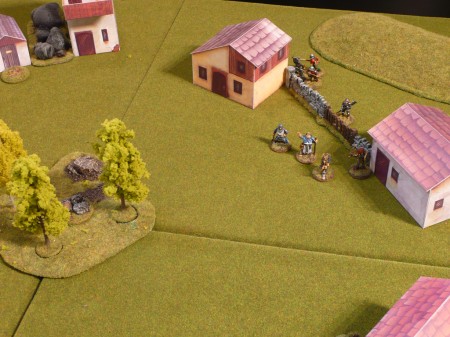 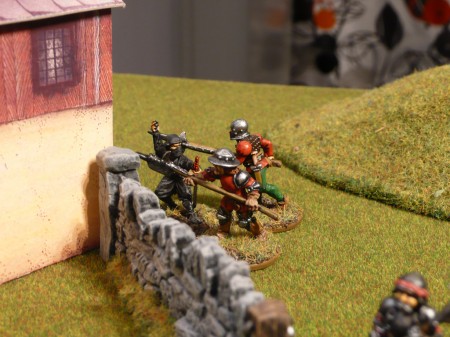 In the center woods stand, one of the samurai flipped an objective marker which spawned Fatgit Rumblegut. For this game, we played him as a wandering monster and diced for control of him each turn. This first turn of his, he came under control of the Stillburg heroes. His first action (spawned models activate immediately, outside of normal turn order) was to charge a samurai close to another objective marker. The samurai was downed, but uninjured. 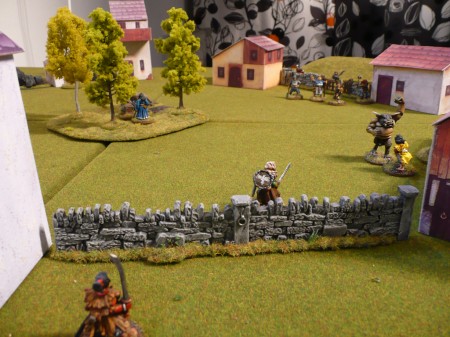 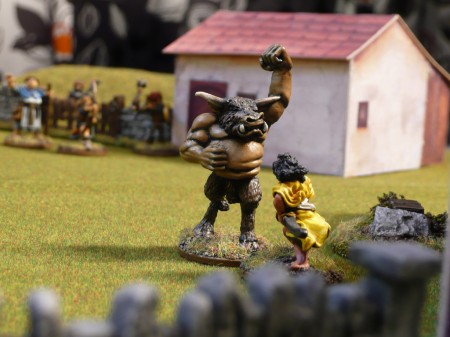 Finally, the half-orc guide moved to the south-eastern objective marker and flipped it. Another ninja appeared. I decided to place it near the heroes, hoping to draw their attention to him while my samurai dashed for the remaining three objective markers in the western parts of the board. 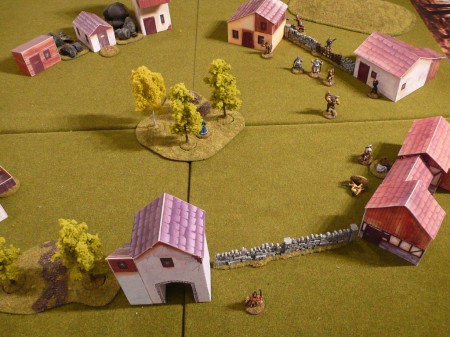 At the start of the heroes third turn, we once again diced for control of Fatgit. This time, the Nipponese won control of him and he charged towards the cluster of heroes in the north eastern part of town. Not being able to make contact, but still presenting a threat, he served his purpose as bait. 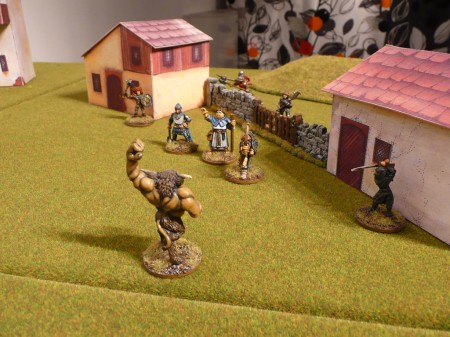 Unfortunately, the heroes were more skilled than expected. Aldor managed to score a hit which made the great beast fall to the ground. Macy quickly moved in for a finishing blow and Fatgit was out of the game. During the same turn, Duncan and Brother Wendel together made short work of the ninja. 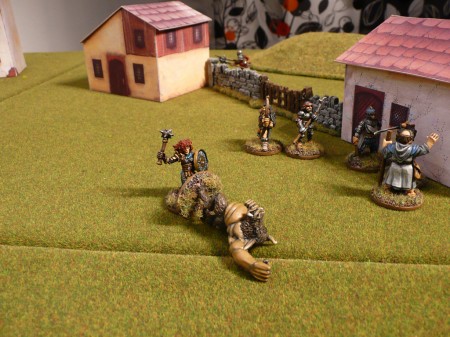 The samurai leader finally managed to jump over the wall and bolster the quality of his troops. The two samurai made mad dashes for the north western and south western objective markers, respectively. None of them yielded any result, so the final marker was turned over and the fugitive Nipponese was placed on the board, at the edge of the western most woods. The cowardly half orc guide slowly made his way towards the center woods, most likely to hide. 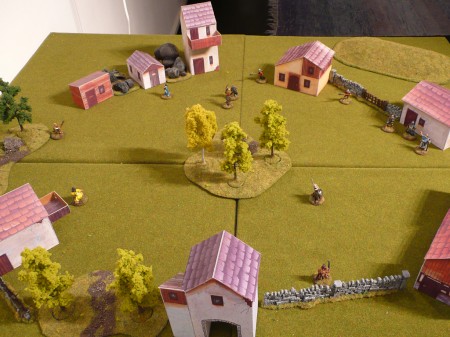 The following rounds were quite uneventful mop-up rounds for the heroes. They methodically wiped out the whole warband (except the leader, who fled off the table) over the course of two or three turns. These were the final positions. 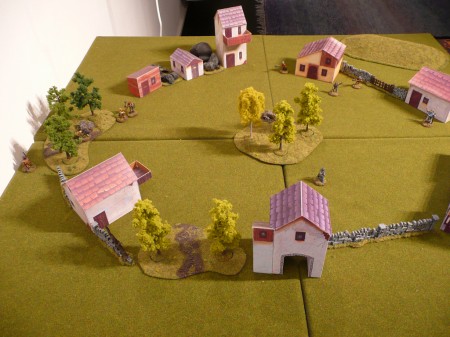 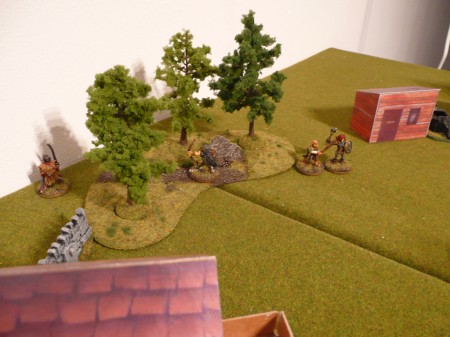 The fugitive turns out to be a Nipponese warrior monk named Isamu Takeshi (Q3+, C4, Combat Master, Dashing, Unruly) and through Macy’s (rather slim) interpreter skills he pledges his service until his life debt has been repaid. In his posession he has a magic armband granting the wearer immunity to ranged attacks by models cheaper than the wearer.

8 Responses to “Songs of Stillburg, scenario 2”