Last time we saw these guys, I had spent about 2 hours on them, doing base coats. As promised, the next step was indeed to finish up the base coats with wood, metals and a few other things (boots, pants etc). About 30 minutes was spent on this, so that’s 2.30 so far! 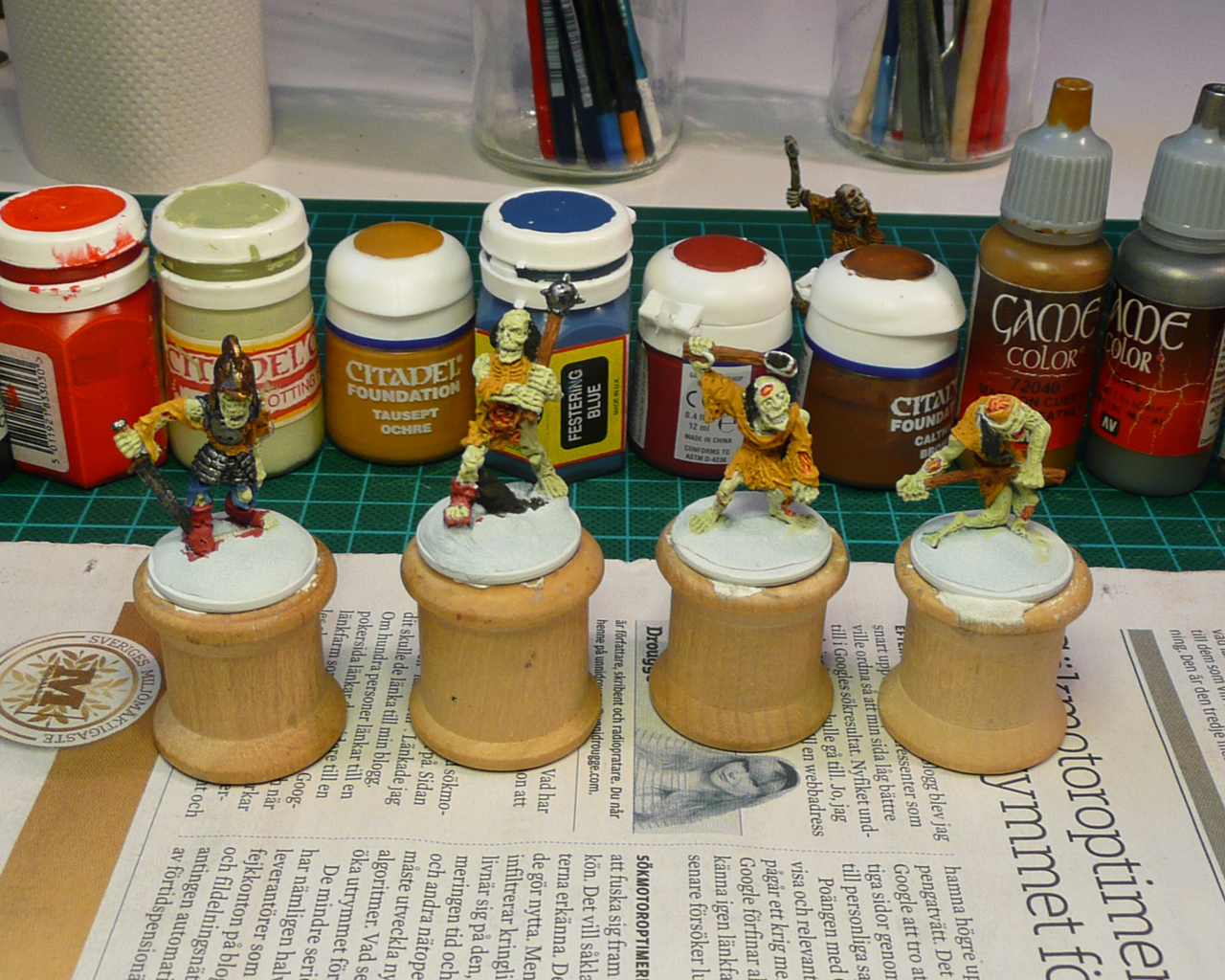 Next, the magic step. The Devlan Mud step! With a big brush, I just soak the whole figure in Devlan Mud. Being foul undead, I’m not too bothered by this – but I wouldn’t have done this on a fancy elf. In addition to Devlan Mud, I do additional washes with Brown Wash (the old bottles with a blue cap) and Badab Black as well as Black Wash. About another 30 minutes for this step and 3 hours in total. 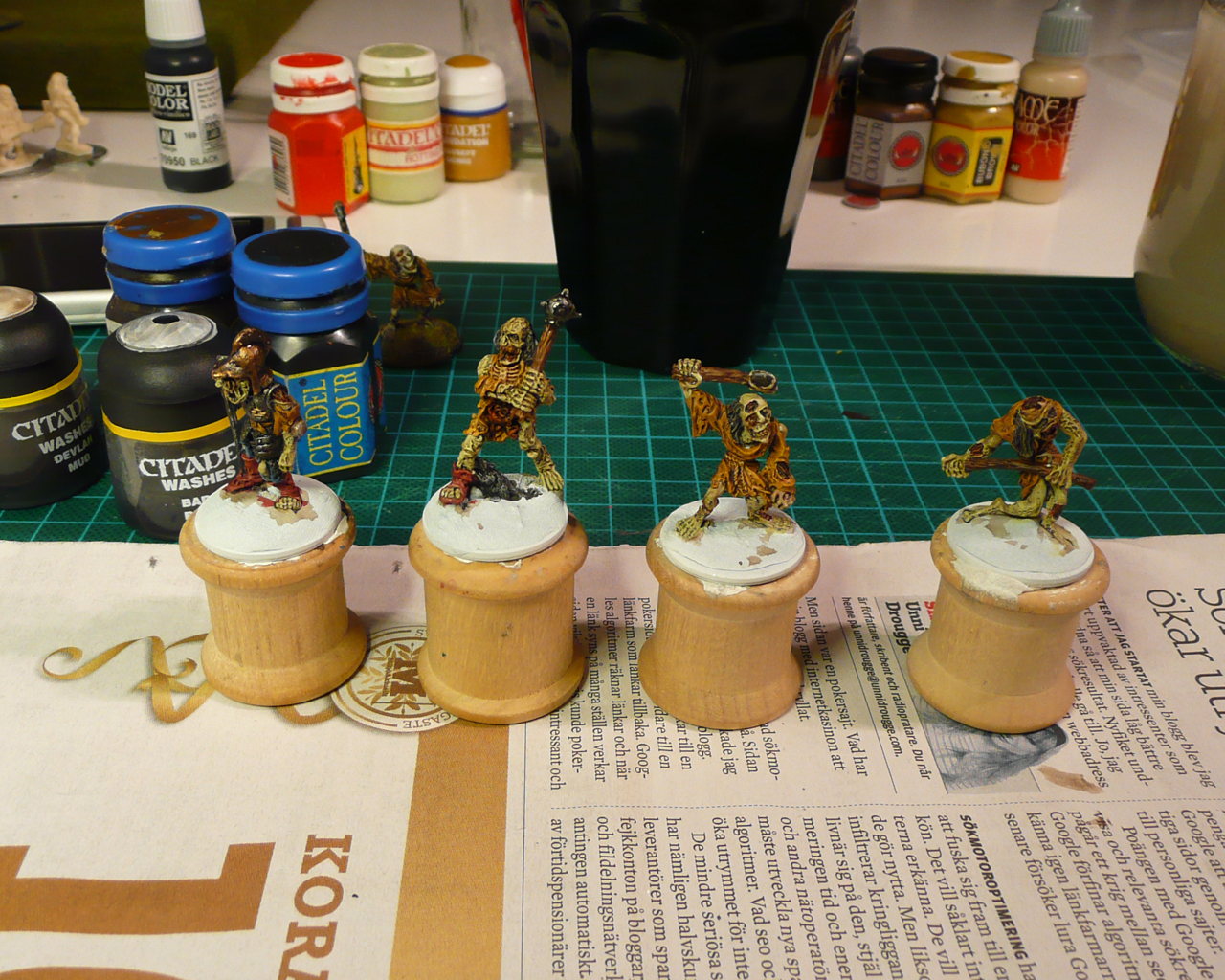 Once the models have been shaded with wash, I start cleaning up and finishing off individual parts of each individual model. It’s quite different from the previous steps so I can’t really give any descriptions but here’s a sequence of pictures. The general aproach is to clean up each area with the base colour and then highlight it with a layer or two of lighter shades of the base colour. I washed the skin parts another time with purple wash too. 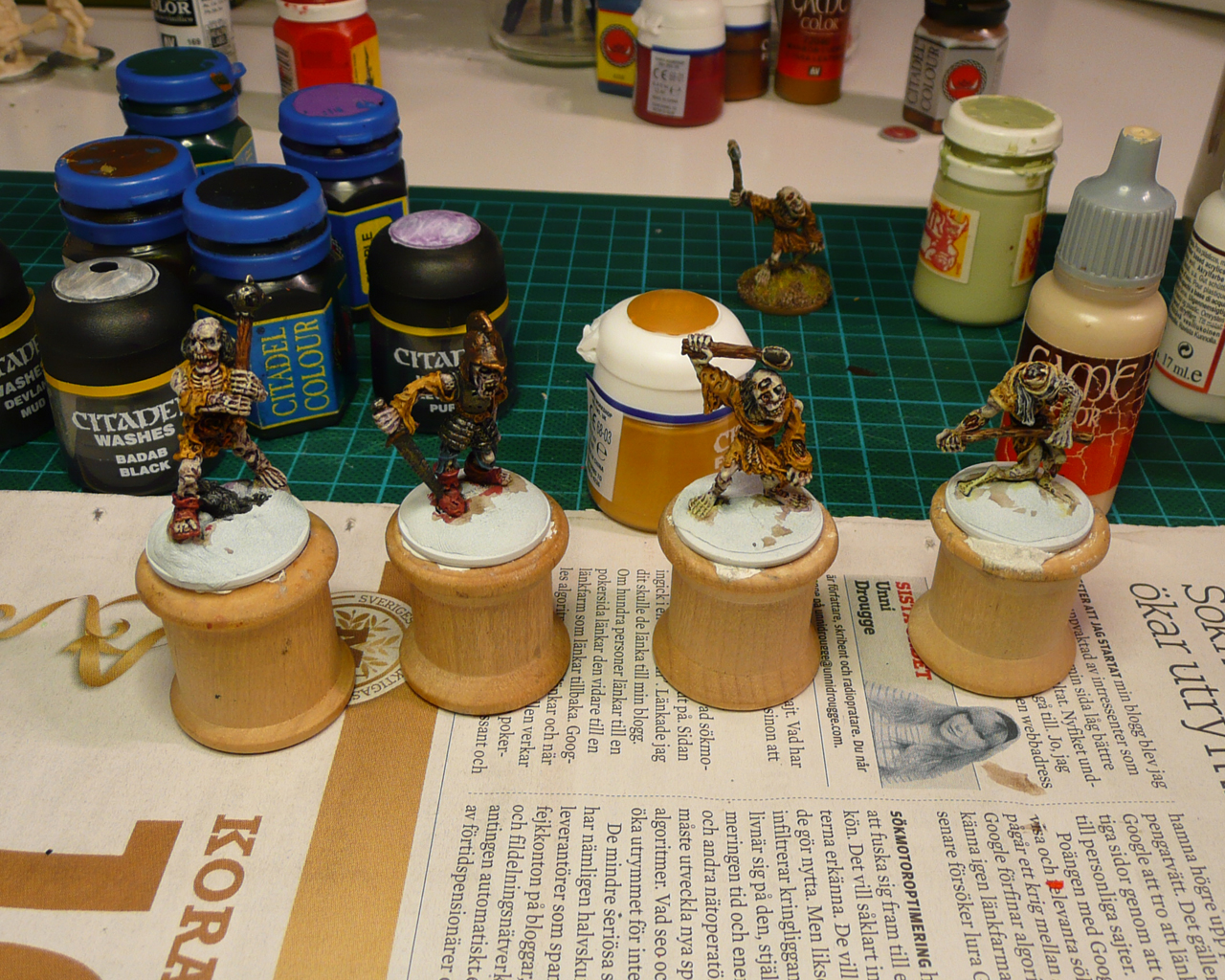 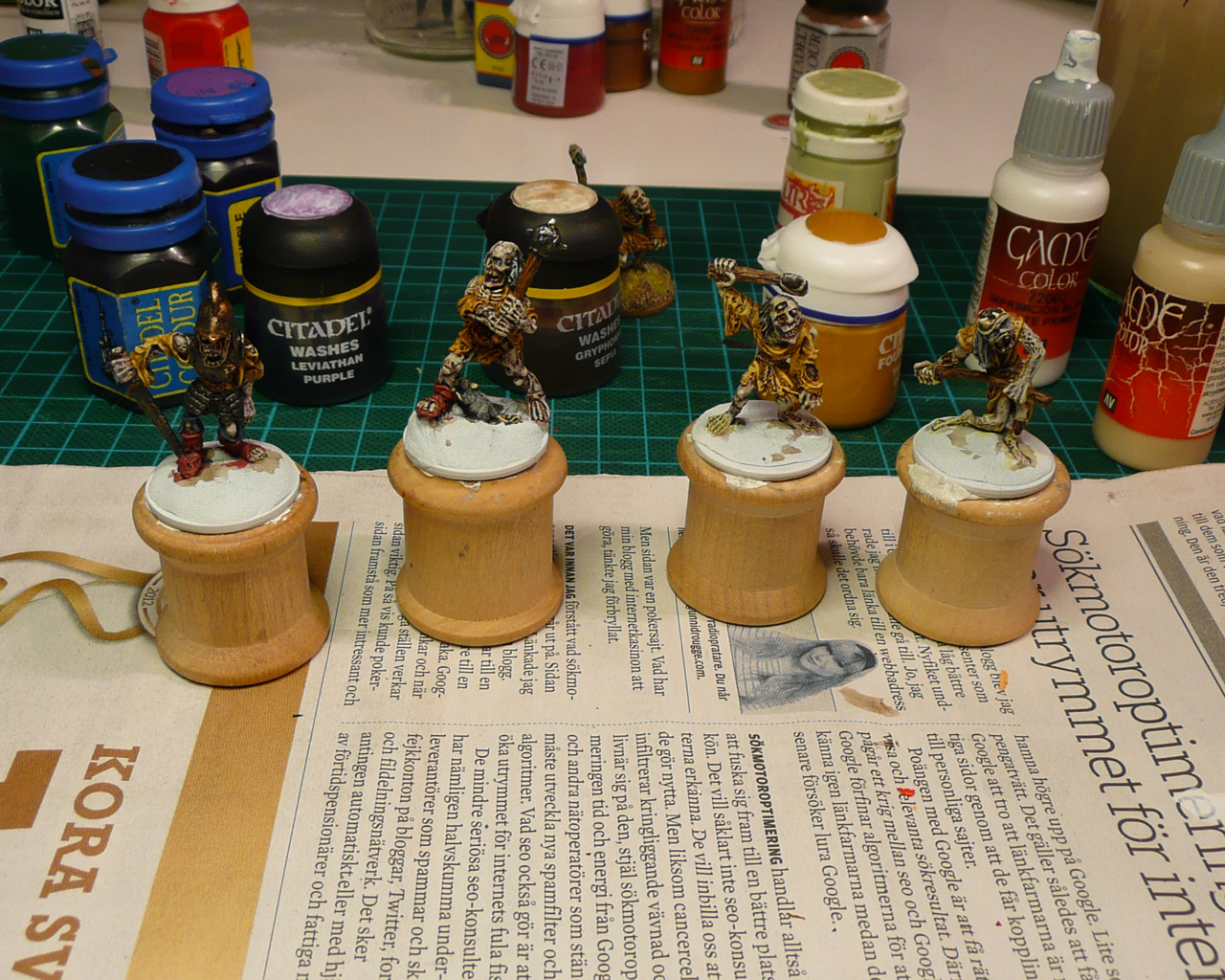 Finally, the models are finished. I spent about 5 hours all in all on them so far. Still have bases to do and a shield for the armoured fellow. 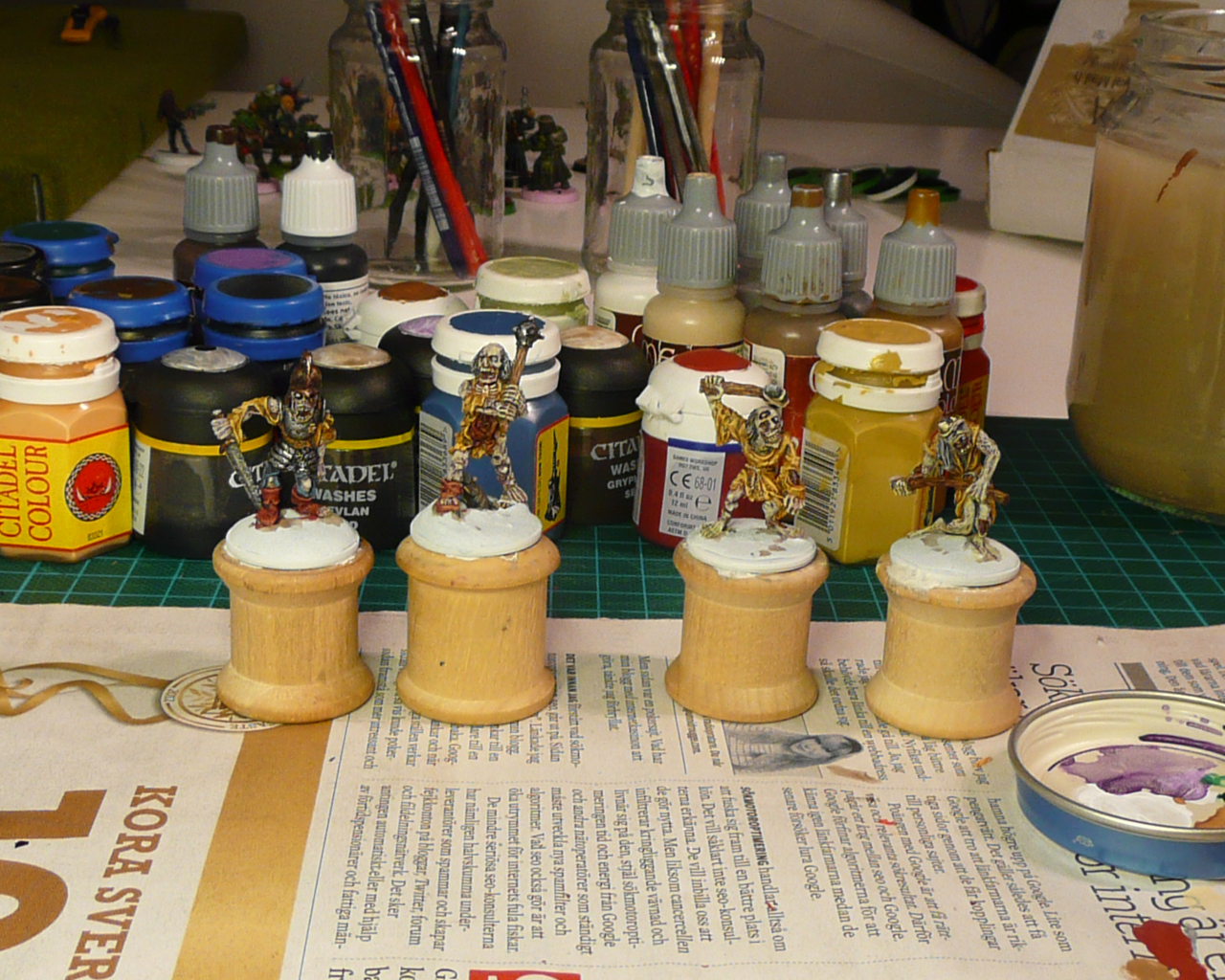 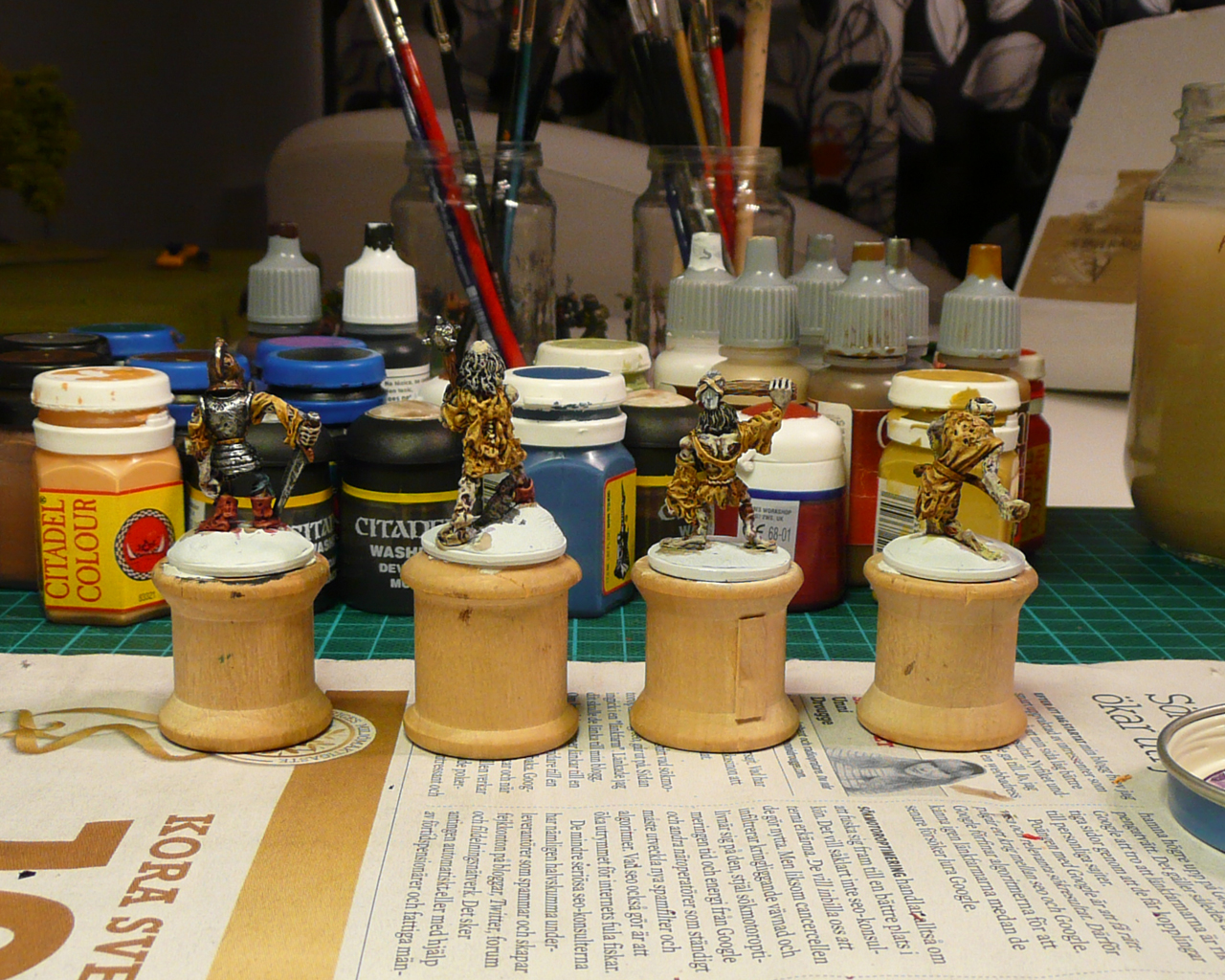 Not exactly happy with them, but they’ll do the job. That’s standard fare for me and my finished minis. I need to base them and let them rest for a while before I start to like them. The Bob Olley skeleton/zombie however will probably remain my least favourite model ever for a long time. There were even traces of fingerprints on the back of the model!

I’ll post proper photos once the guys are based up and all done. After that, I’ll paint MORE zombies! I’ll have some variation though, as the ones I’m painting next are a newer edition sculpted by Gary Morley. Probably my least favourite sculptor of all time. I was about to call him the Herb Trimpe of Games Workshop, but had a change of heart as Trimpe is more like Olley. Oddly proportioned and a weird style, but their work have an oldschool charm.