Martin (of Shamutantis fame) and I got together for another game of Pulp Alley a little while ago. Once again, good times and many laughs were had so it’s looking to become as regular a fixture as our child laden family lives can allow. Next time, I’m heading to Copenhagen for some Rogue Trader skirmishing. Looking forward to that! 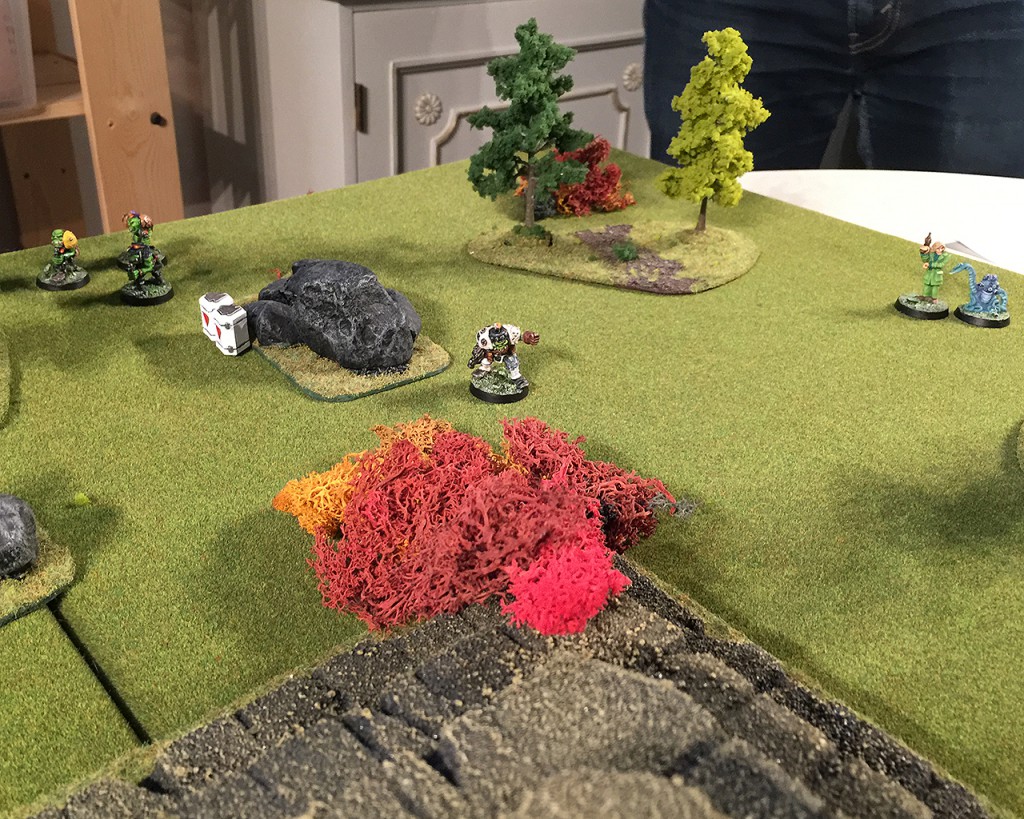 It was early morning yet, as Conrad Moon and his bruteish entourage made their way through the underbrush. It had been a long search, but it finally seemed like he would be able to lay hands on a fabled idol of the Raizze, the indigenous race of the forest moon Luis Rey Prime. 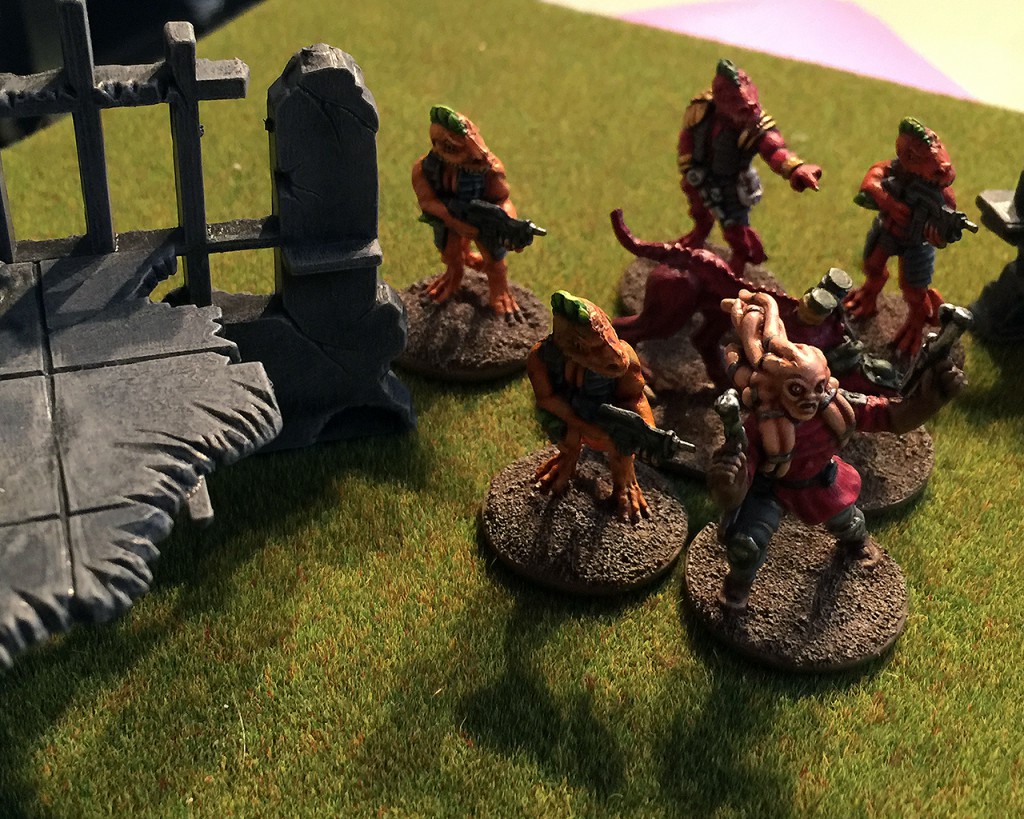 Unbeknownst to Conrad, scoundrel Morton “Balls” Fieldmann had overheard the drunken boasting of Demp and his ork goons at the space port cantina. Hoping to claim the idol and deliver it to the dreaded Blacksmith on McKemmler IV, Balls was now being escorted by the local Raizze chieftain and his closest warriors, under the false pretense of him wanting to help them fend off the outisder raiders and save their valuable cultural heritage. 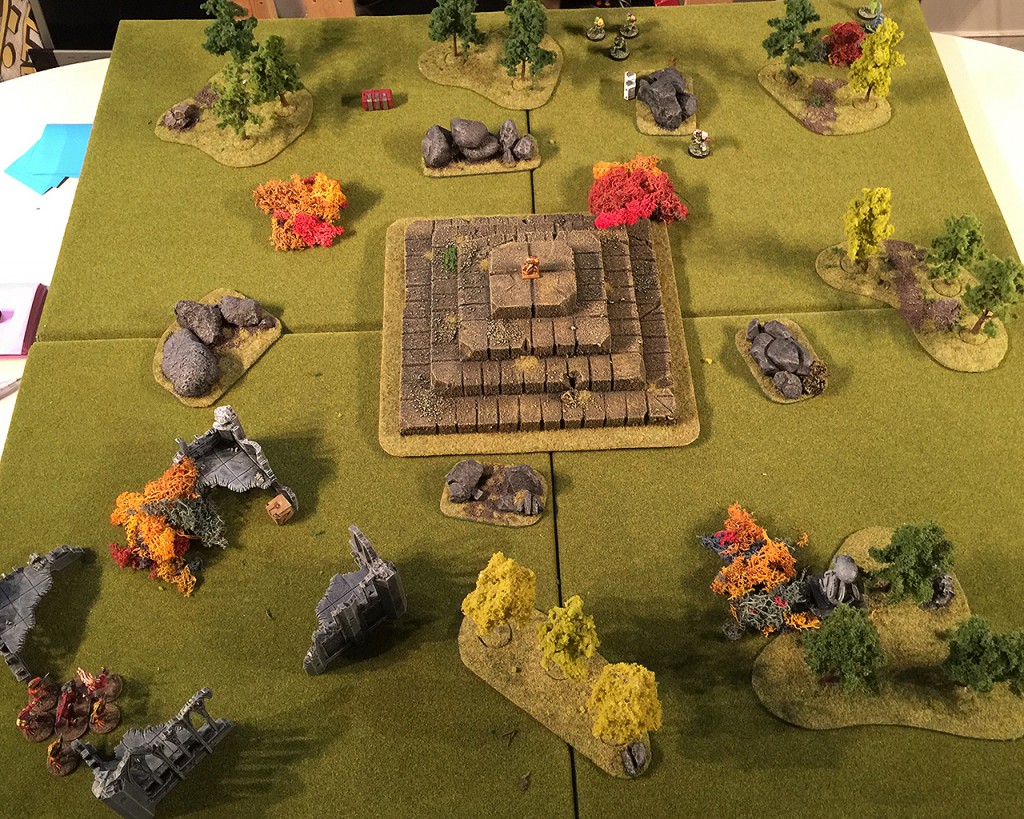 An overview of the table. 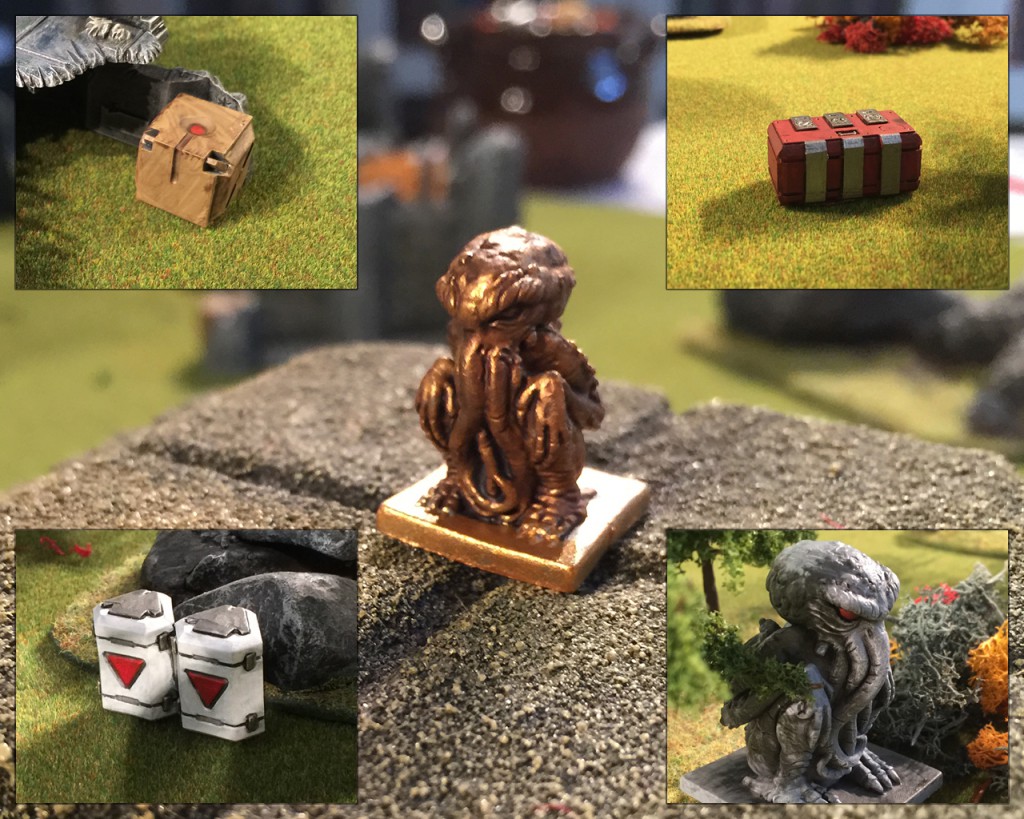 Both groups have the same goal – get their mitts on the golden idol (the major plotpoint). A few generic boxes of supplies make up the minor plotpoints, together with a white crate containing a jetpack (extreme peril to take off and then an extreme peril to land anywhere on the table) and a stone statue with ruby ingots for eyes. 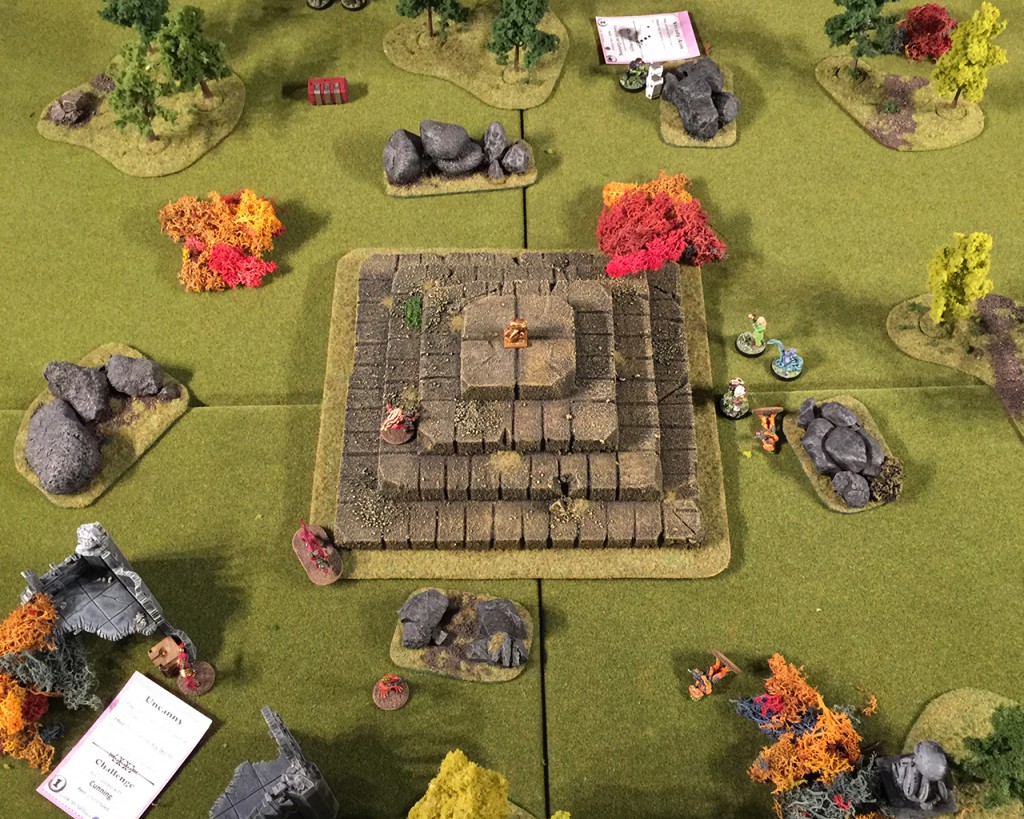 Balls ascended the ziggurat on one side, while Conrad Moon and his closest “men” approached it from the other side. The raizze tried to block off Demp from the divine statue in the clearing, but fell in the ensuing firefight. In the meantime, one of the orks was left behind to fiddle with the jetpack while the other two headed for a crate of supplies. 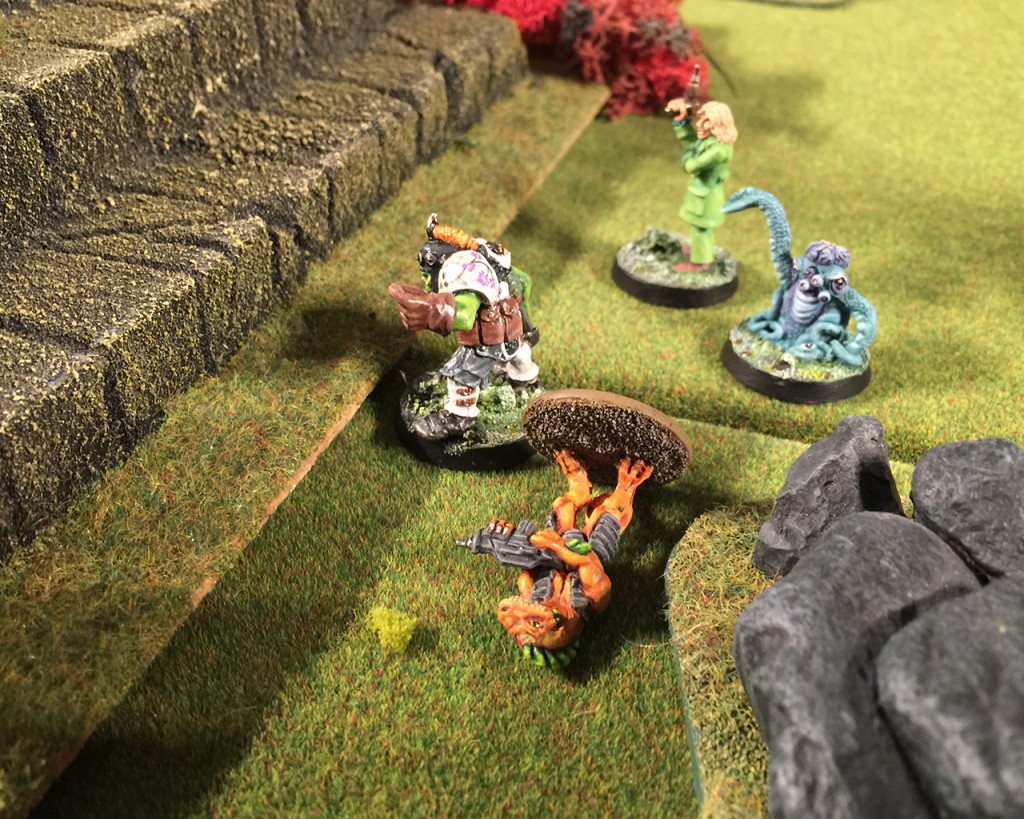 One of the raizze made the mistake to bum rush Demp, who was a very adept brawler. 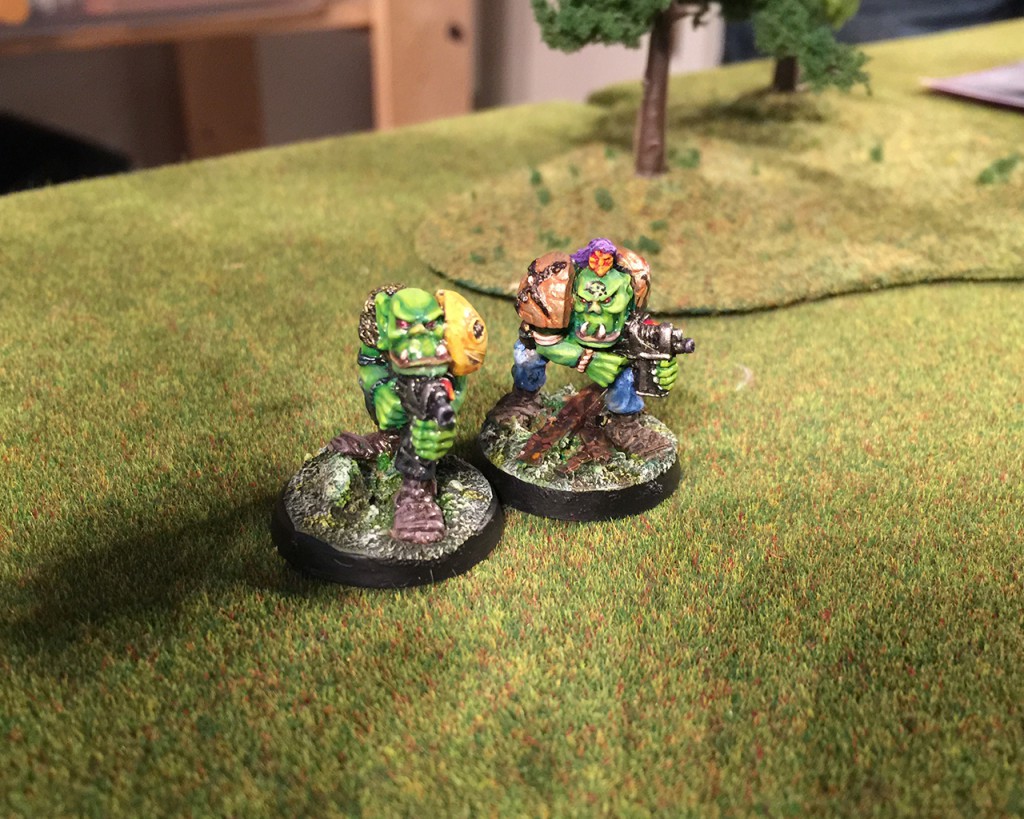 Ork muscle Gumbah and Larma rushed to secure a box of… supplies. 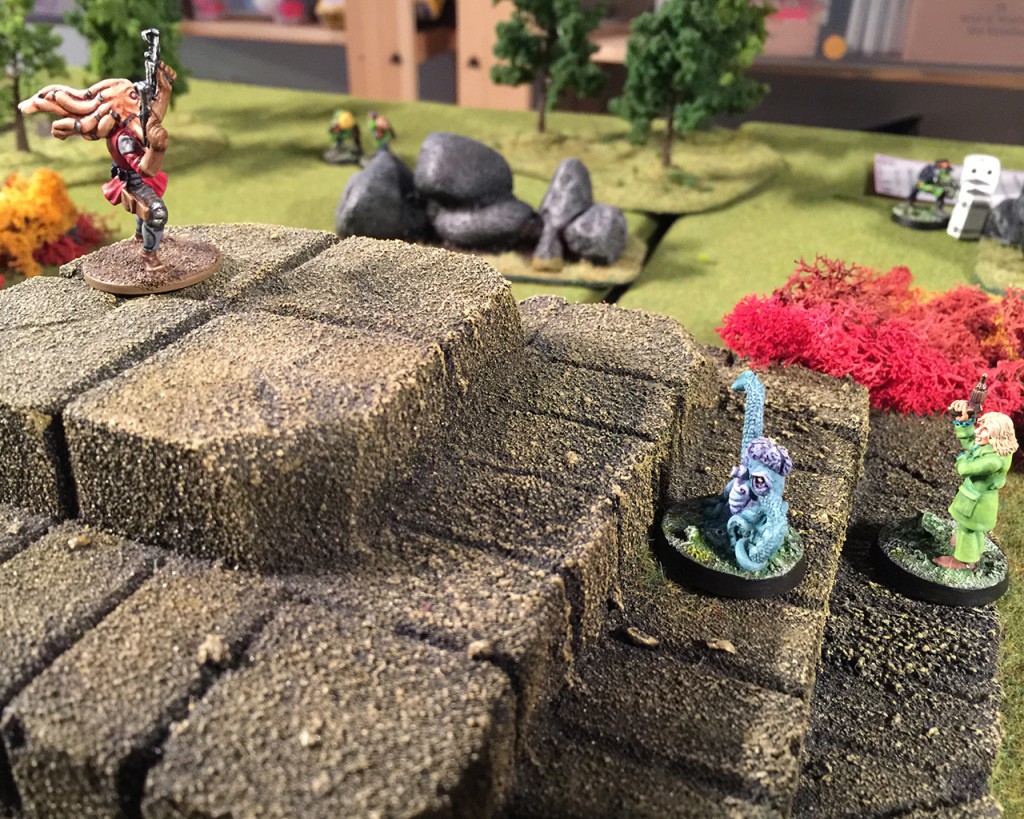 Balls reached the summit first, and managed to uhm… “rescue” the golden idol – much to Conrad’s chagrin. 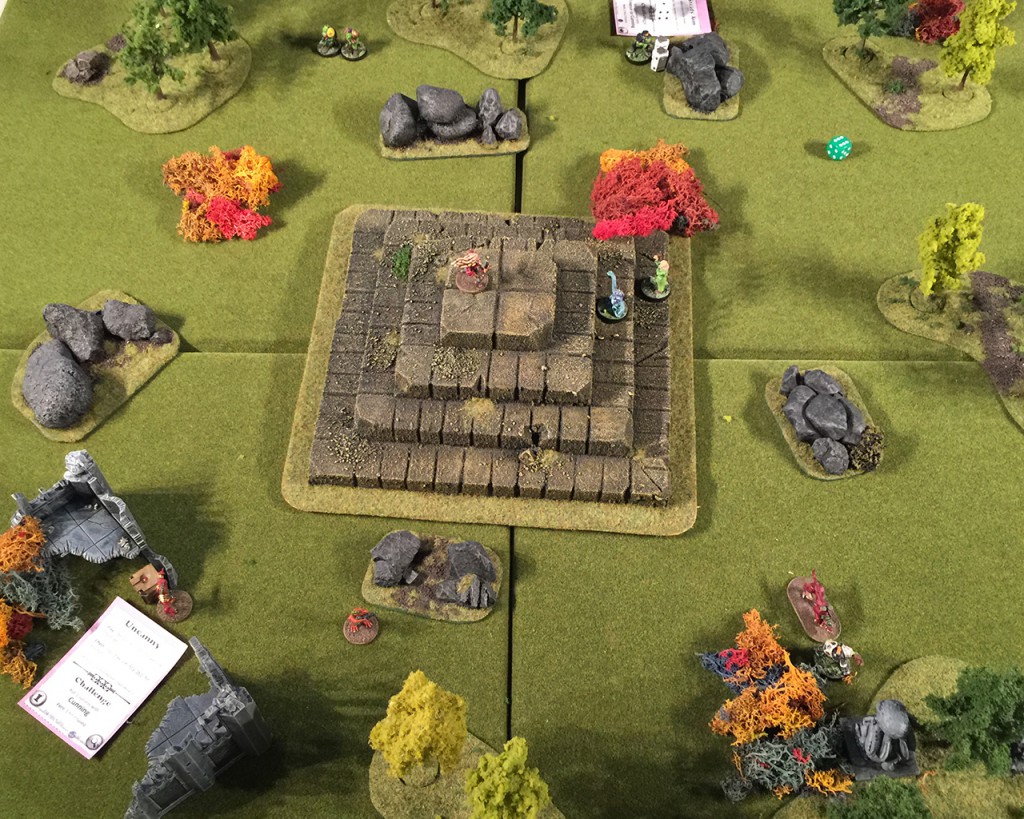 Demp was so tempted by the ruby eyes of the sacred statue that no amount of raizze could stop him from prying them loose. 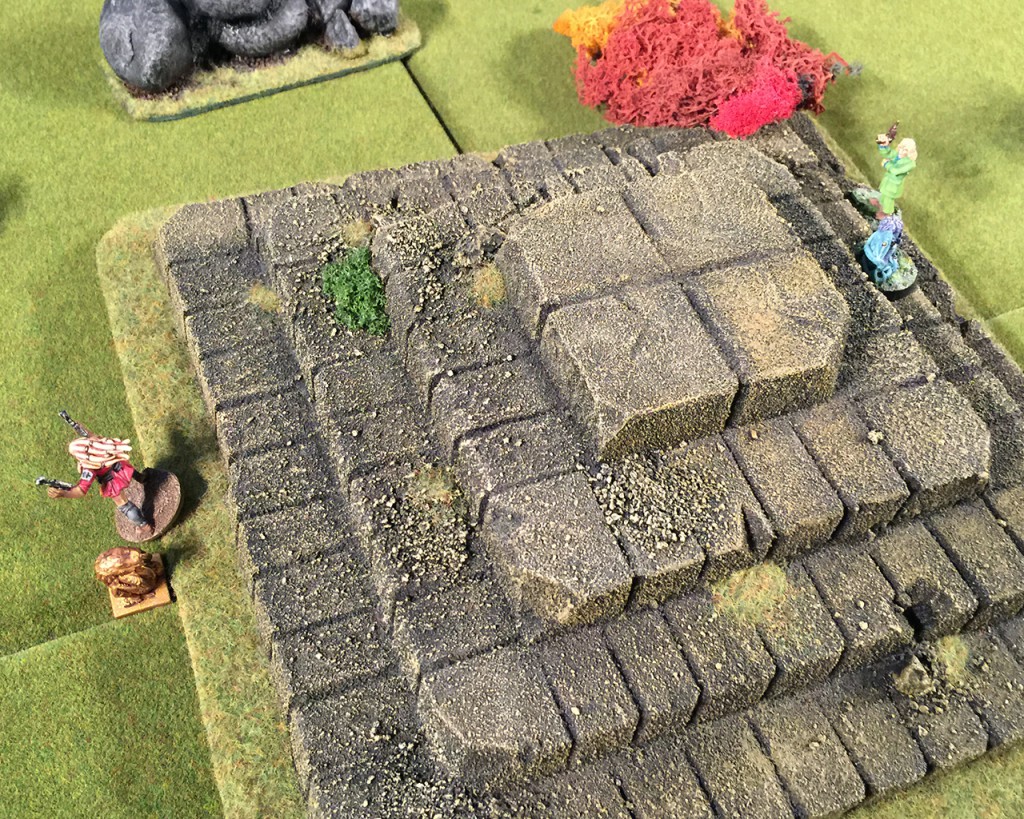 With a bit of luck, Balls manage to put the ziggurat summit between himself and Conrad Moon – eager hands clutching the golden idol. 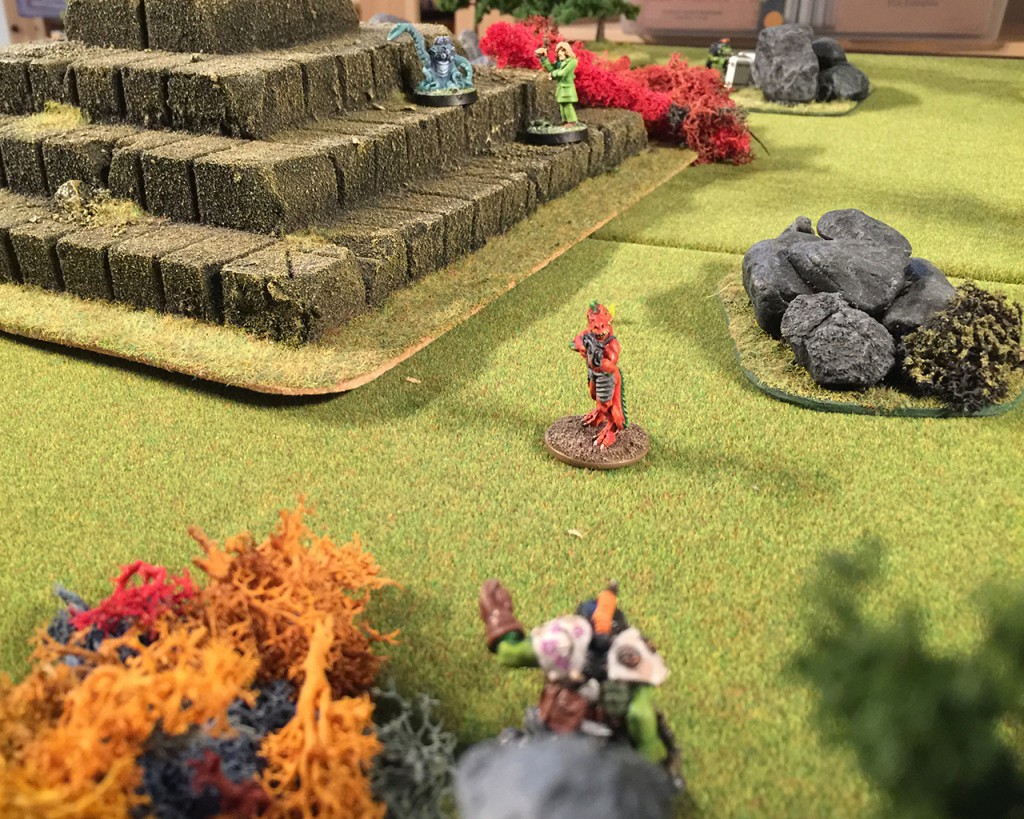 The last one of the three raizze troopers (and their lizard dog) standing tries to bring down Demp, with little luck. 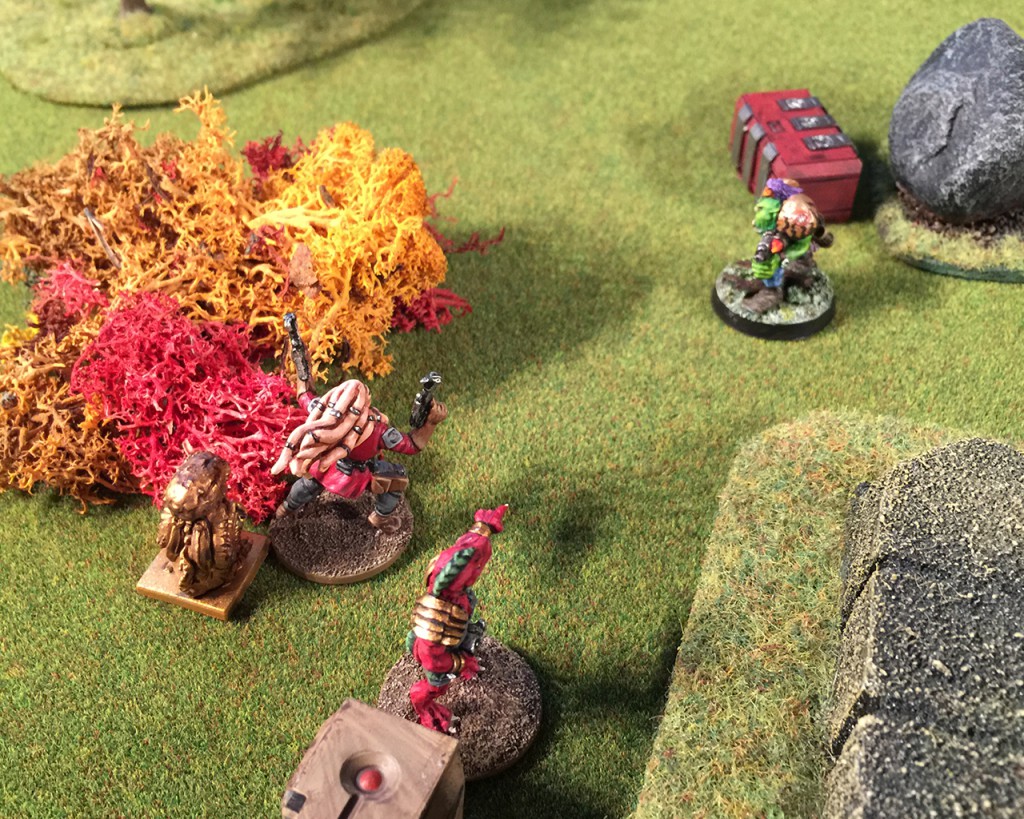 Balls and the raizze chieftain defend the golden idol against the orks Gumbah and Larma, managing to fell Gumbah. 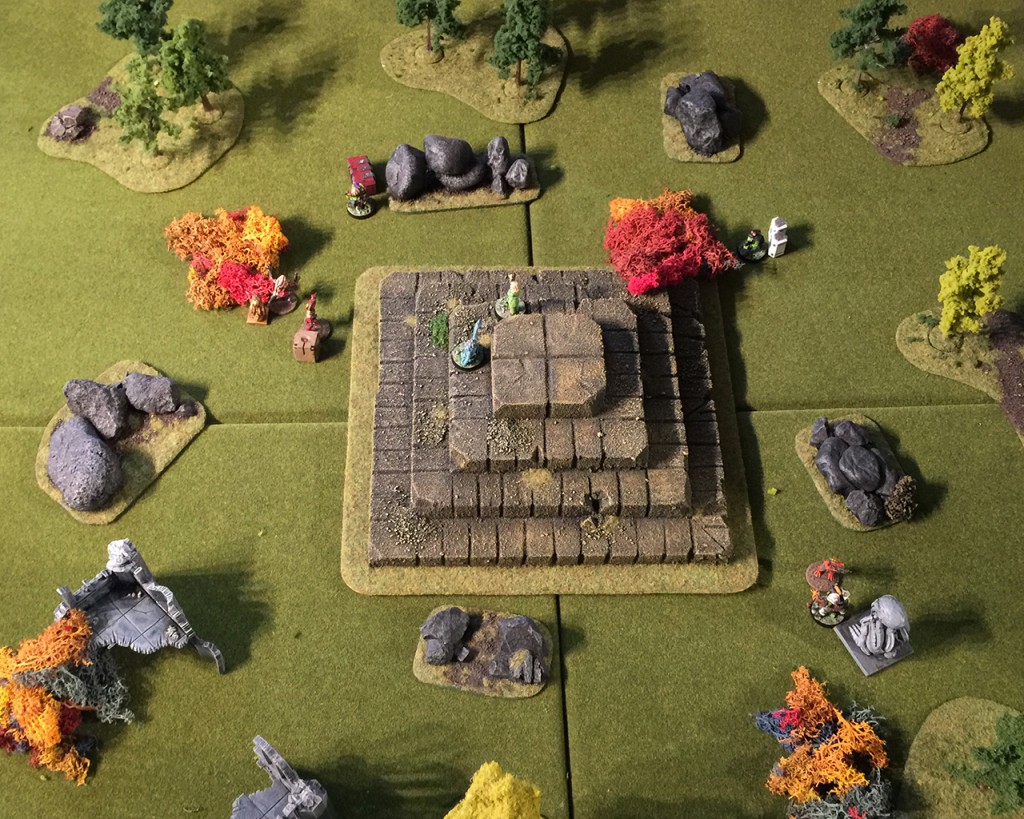 In the last turn, Conrad and Zyph attempt to take down Balls, while Demp continues schooling space lizards in the fine art of pugilism. He managed to take out three troopers and the lizard dog all by himself. Fenk is (very bravely) hiding behind some shrubs with his shiny new jetpack toy. 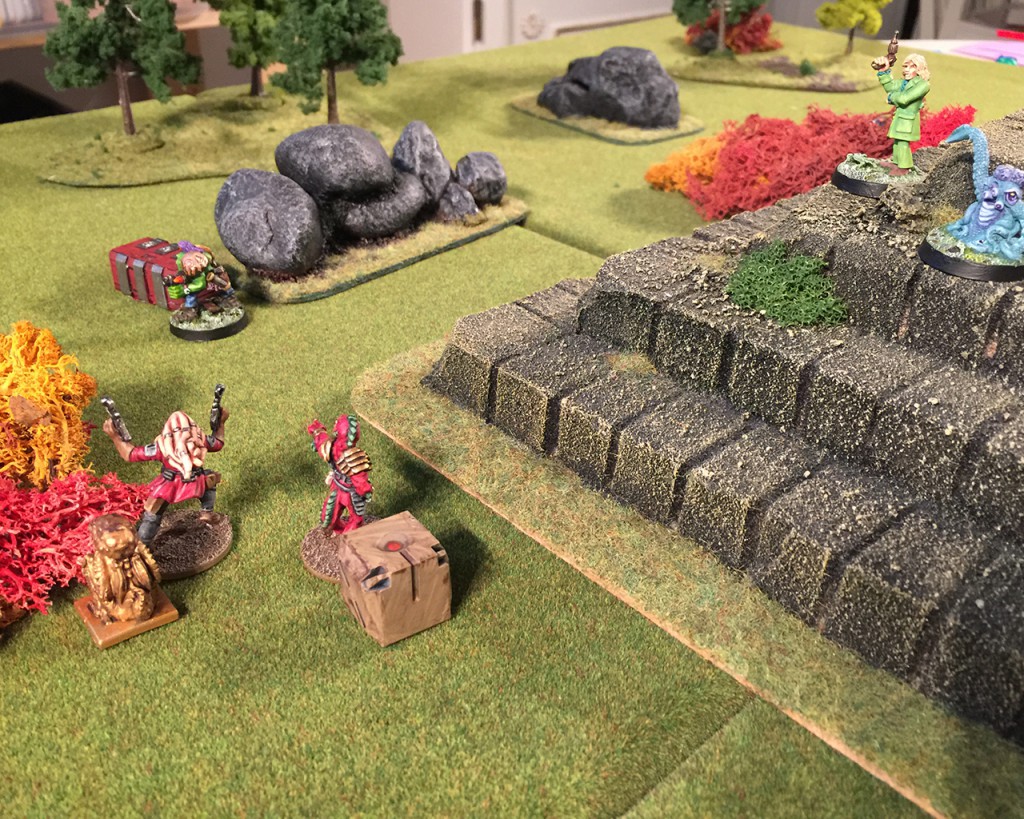 Despite a heroic last effort from Conrad Moon and his henchmen (henchorks?) Balls and the raizze chieftain manage to slip away. Not much later, the raizze leader surprisingly finds himself abandoned in the wilds with Balls travelling back to civilization all on his own.

We played a generic smash and grab scenario, which I feel really shows hos the game work. Dash for the plot points with your strongest guys, throw the weaker red-shirts under the bus as speed bumps. We had a good time, and decided to play a quick follow-up to this game the same day. A short report on that will be up next. In the long run, I’m still undecided as to whether PA is a game to stick with or not… It’s fun, but I get a feeling that there’s not enough consequence to the in-game action. Especially the leaders are nigh invulnerable and recover easily. Also, after a game there’s very little chance you’ll get any form of increase on any model (or the league itself) which means a campaign is pretty slow going.