Meet Paulie, a small-time crook gone big-time over night. Papers is currently based on McKemmler IV, where he’s been mixing it up with ArmaSec agents. Wanted by the Empire for data theft and various other cyber crimes, a bounty have been issued on him. The big question is, can he count on his newfound friends in ArmaSec to bail him out if he gets caught? Probably not… 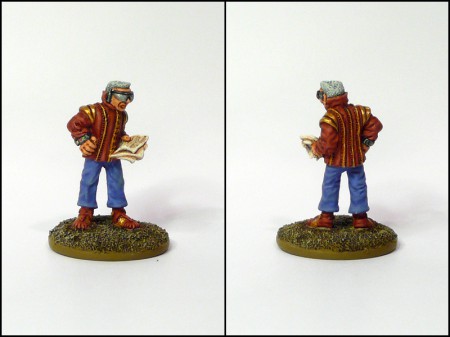 This is a Metal Magic Spacelords C3706c Civilian Carrying Documents. Sculpted by Josef Ochmann and released in the early 90s, he’s still in production and available from EM4 Miniatures for a measly £1.50 at the time of writing. Go get one!

This marks a special occasion by the way. Not only is this the first painted miniature I’m posting this year, it is also the first painted miniature for my scifi project. Oh joy! If you think I’ve downgraded the backgrounds a bit you’re absolutely right. In my constant strife to optimize the process I’ve done several changes to my regular approach to miniature painting (and posting). First of all, I’ve tried to keep as limited a palette as possible. My main source of inspiration is 80s comics. Secondly, I’m doing no blending or serious highlighting or shading. Basecoat, wash, basecoat, highlight. That’s it. I’ve also omitted the scatter or static grass on the base as I’m not 100% certain how I’ll base these models. I want them to be able to share monsters and creatures with my fantasy models, so I’m going for a similar basing style. I might end up putting static grass on these too, or some other ground scatter. The jury is still out. Furthermore, I won’t do scenic shots of the models I post as my main purpose with posting this is to get an online reference and documentation on what I’m painting. Every now and then I might do “specials” with groups of minis, but for now – white backgrounds will have to suffice. This to reduce the setup time and general faffing about with the photos.

Finally, I won’t do detailed write-ups or come up with personalities for EVERY miniature. If I have something, I will post it of course – but I won’t force it.

PS. Collaborative credit to Paul over at sho3box who inadvertently helped me name this guy when we were discussing it and the alliterative naming method Stan Lee has employed. A bit geek, yes.