Here’s a not-so-short brief of how I’m imagining the galaxy in the world I’m setting my games and scenarios. Heavily based on that of early Warhammer 40K, I’ve added and removed as I saw fit. It probably does not make sense from any perspective at all – but I’m just pulling a skeleton back-story together so any and all players have a common idea of the background for the scenarios.

The Empire of Earth
After millennia of total war, the galaxy is more or less at peace in the 41th millennium. Mankind lives in relative stability with xeno races, often sharing systems and sometimes even planets, with the squat, eldar and ork races. The behemoth theocracy of the Imperium have crumbled, and the imperial army have been decimated as the major warp gates imploded during the last great wars with the forces of chaos. Humanity is united under the banner of the Empire of Earth, but the god-emperor is no more. The main challenge for the imperial administration is to keep the large and powerful corporations in check and to maintain diplomatic relations with the xenomorph races (xenos). 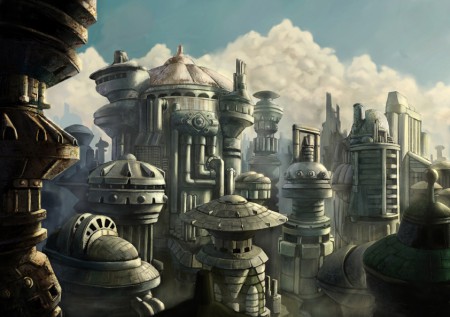 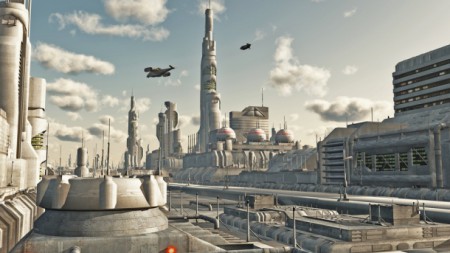 Only the core systems are under direct administration of the Empire. The rest of the galaxy is sublet to vassal corporations, much like feudal Europe. The armed forces of the Empire consists of the Imperial Guard, the Imperial Navy, Adeptus Mechanicus and the Inquisitorial Diplomats. The old Emperor is still worshipped as a prophet and avatar of God, but the imperial church have undergone a cathartic reform. It is a monotheistic state church of the Empire, but the Empire as a state is now a secularized republic. The name “Empire” is more symbolic than anything, indicating the far reaches of the Empire rather than a political system. 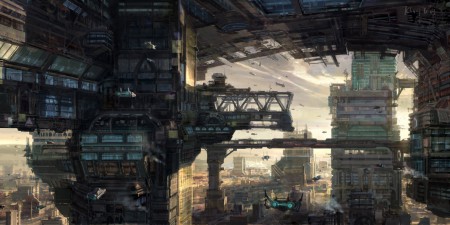 You know the drill by now. Empire. City. Thing… 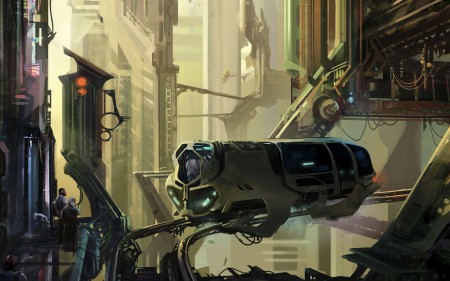 The Imperial Guard is usually deployed to systems where a large presence is needed over a longer time. A bit like the UN armed forces of today, they’re mainly used for peace keeping. It consists of mechanised infantry with heavy weapon support, but also various elite or specialist squads and regiments. These regiments often contain xenomorph races, such as beastmen, ratlings or squats. Less common are regiments of eldar or orks, but they do exist. 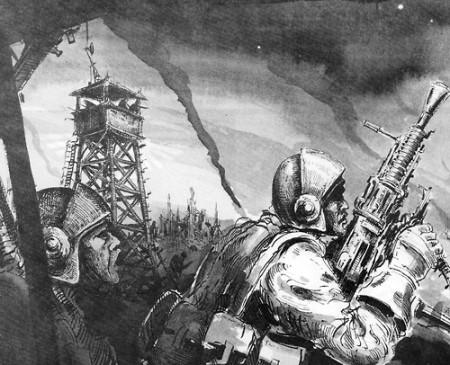 The Imperial Navy consists of two branches; the space fleet and the imperial marine forces. The majority of large scale armed conflicts and wars are resolved with the help of the imperial fleet either in space combat or by means of weapons of mass destruction. Military doctrine have changed, so no longer are massive wars fought planet-side with thousands of troopers charging at each other. Instead, either a system is purged from orbit or tactical nukes and small strike teams of space marines are used. With such a reality, all-out wars are not started lightly and this balance of terror is one of the contributing factors to the current stability in the galaxy.

Smaller ships like these are often used for in-system travel.

The Adeptus Mechanicus are based on Mars, from where they scour the galaxy for long lost relics and old technology. Their focus lies on improvement of current technology and new inventions. They have changed into a fully atheist organization and the old ways of worshipping the machine god are gone. They rely heavily on using automatons such as servo skulls and servitors as well as personal cybernetic augmentations. Remnants of the old ways remain in the form of deviant cults, still worshipping the god in the machine. This sometimes lead to internal, ocassionally even armed, conflict. 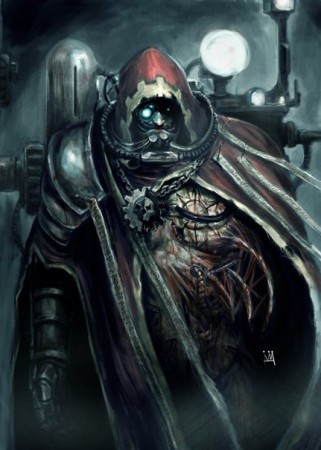 Brother of the Adeptus Mechanicus. 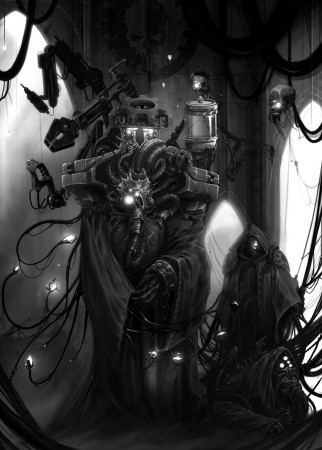 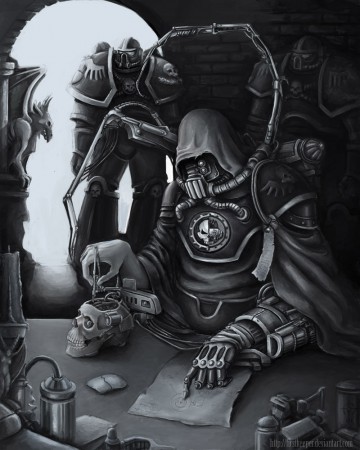 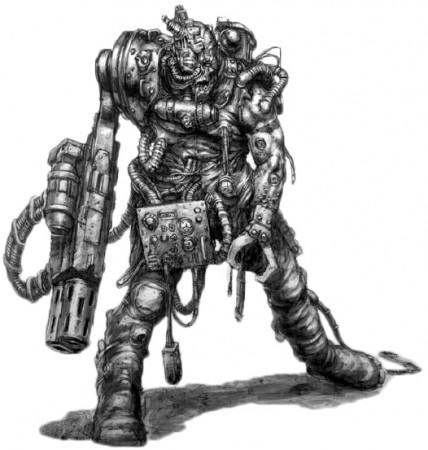 The Inquisition, in the now secular republic, have pretty much lost it’s power. Their main purpose is to aid the Ad Mech in exploratory missions, or to participate in diplomatic missions involving iso-worlds (renegade worlds refusing the Empire, living in the old ways of the Emperor) or xenos.

Inquisitorial transport preparing to drop off a “diplomatic party”. 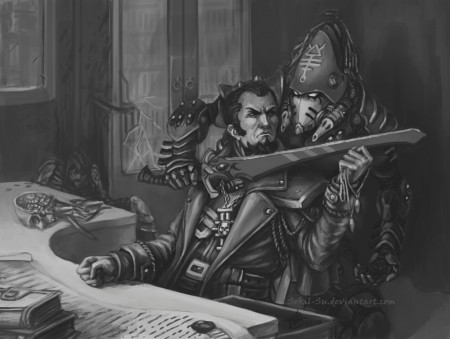 A perilous galaxy
Of course, the galaxy is still a dangerous place. Tyranid hive fleets roam the universe, pirates and privateers harass trade routes, the taint of chaos pours from lesser gates and temporary dimensional rifts. Genestealer cults occassionally surfaces on remote outposts and colonies, and every so often new intelligent life-forms are encountered. Mutant raiders and zealous followers of the Imperium of Old are other factions constantly causing the “new” Empire troubles, especially on the aforementioned colonies. 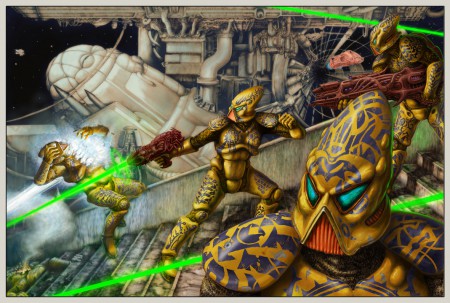 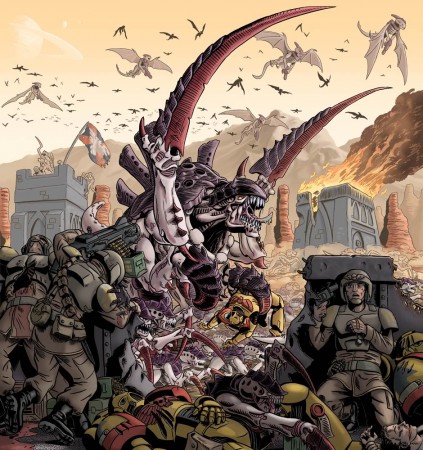 An imperial outpost over-run by Tyranid.

These colonies are usually rather small frontier towns or settlements. Sometimes a colony will grow into a huge metropolis, but that’s rare. Usually a colonized system will consist of a handfull settlements with a few thousand Imperial citizens in each. Indigenous species are mostly left alone, as the Empire or corps normally only colonizes a system to exploit natural resources. 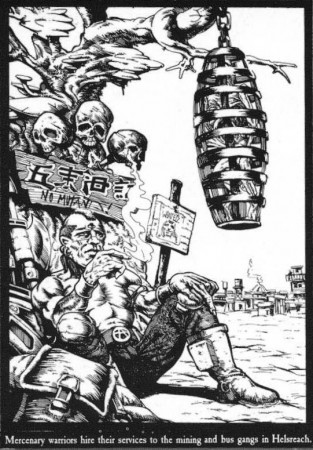 A mercenary on a iso-world colony 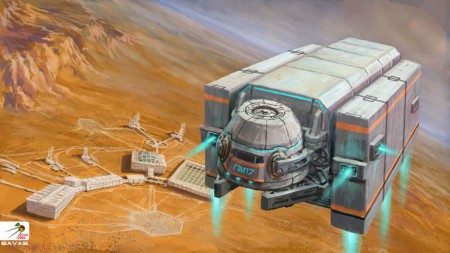 Shuttle dusting off from a colony on a fringe system. 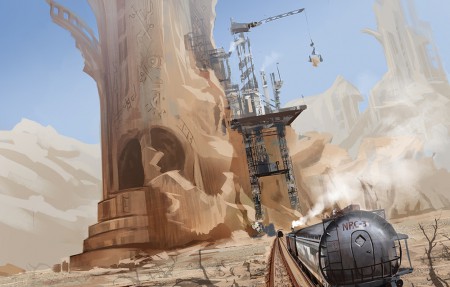 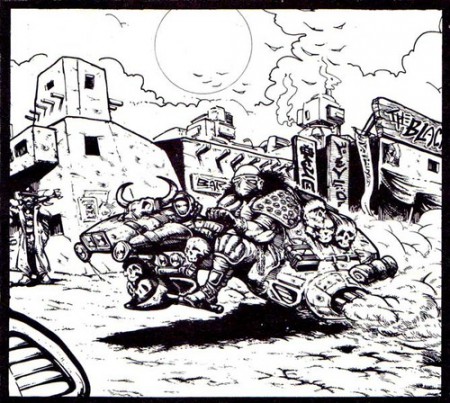 On many colonized systems the base technology level is fairly low, with higher tech mixed in.

Corporations in the Empire
Huge vassal corporations (simply called corps or vassals) rule over planets or systems with absolute control. The Empire has little to no control over the vassal systems. Imperial policies and regulations are usually followed, but ignored when convenient. The Empire rarely enforces law forcefully, but it happens. Most of the time, corps get away with a (big) fine and a slap on the wrist, as the Empire can’t afford the enmity of trade federations and corporate cartels. Corporations work together to maintain trade stability, but the alliances are fragile. Lesser wars fought between rival corps are commonplace. Each corporation have their own standing armies or employ mercenary forces. 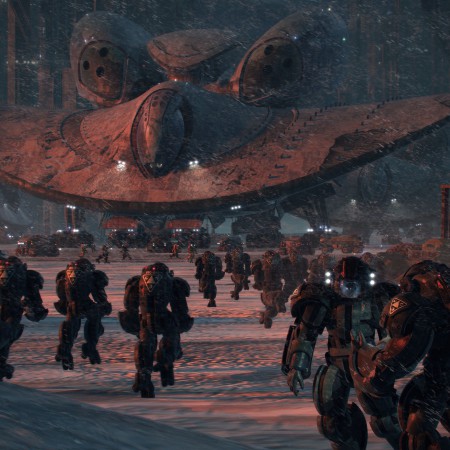