It’s been a long while since I played a game, but today I got the opportunity when fellow Oldhammer Forumite  Martin visited from Copenhagen. Since it was our first playdate, we figured something light and easy would compliment the obligatory rummaging through Mount Lead, shuffling through old rule sets and general nerd banter.

We decided to go for Pulp Alley (albeit in space), and I had a scenario half prepared.

Captain Morley and his crew have returned to McKemmler IV with some contraband to unload. In their cargo hold lurks the most recent addition to Morley’s menagerie; an astro badger! Alas, the astro badger somehow manages to escape the Chaste Magpie and skedaddles off into the ruins of Foundation City (the inaugural colony set up when the first colonists came to McKemmler IV). As they set out to find the lost pet, they’re alerted to the presence of another crew. Marty “Balls” Fieldmann and his cronies from the Blacksmith’s crew! What a surprise, considering Astro Badger Crock is the Blacksmith’s favourite dish. 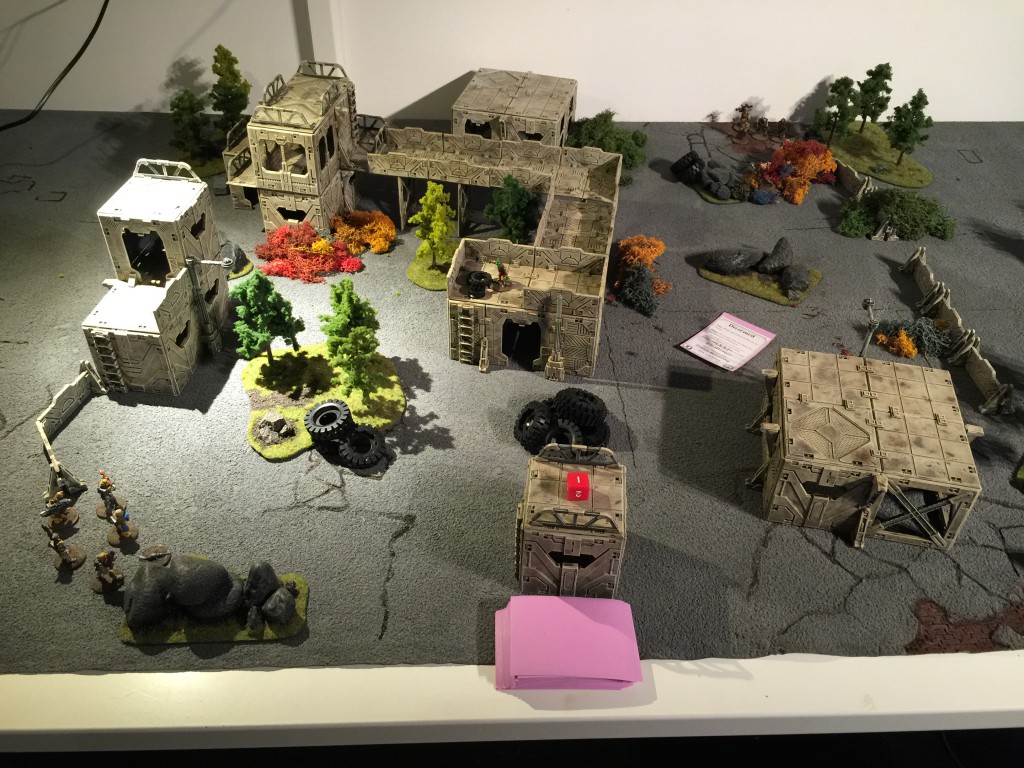 The two groups deployed in opposite corners of the table, for the Trail Of Clues scenario. 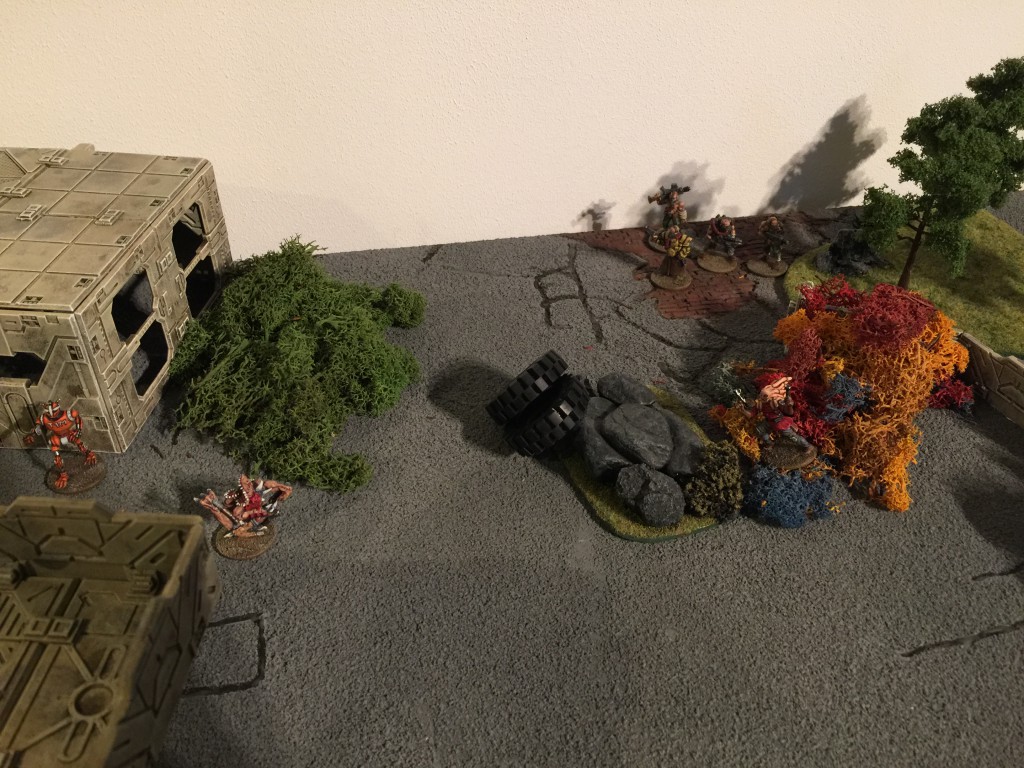 Morton “Balls” Fieldmann (hiding in the shrubbery) is joined by sidekick Bodnia and three allies Franke, Tonny and Radovan. The follower “That” have just acted, moving towards the first plot point. I commanded these guys. 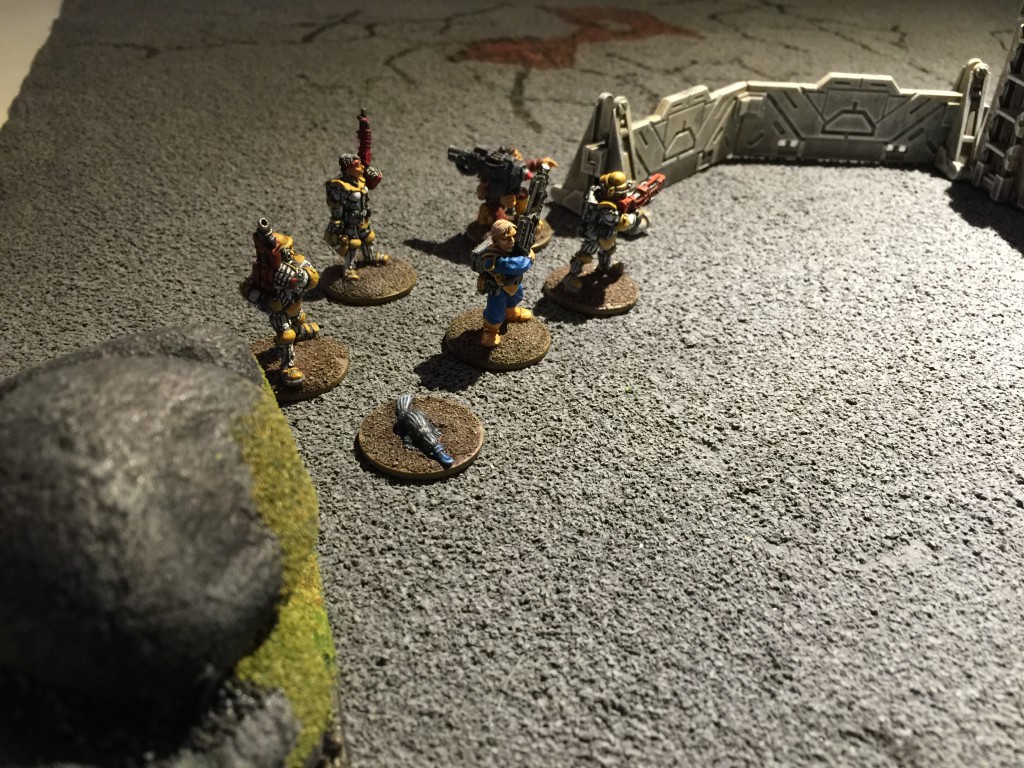 Captain Morley (in blue) and co-pilot Stickney (sidekick, in red) are backed up by clone brethren merc Wagoner, Cuera and Dawleen (allies). At their side, trusty radipus Bil (follower). Martin played these. 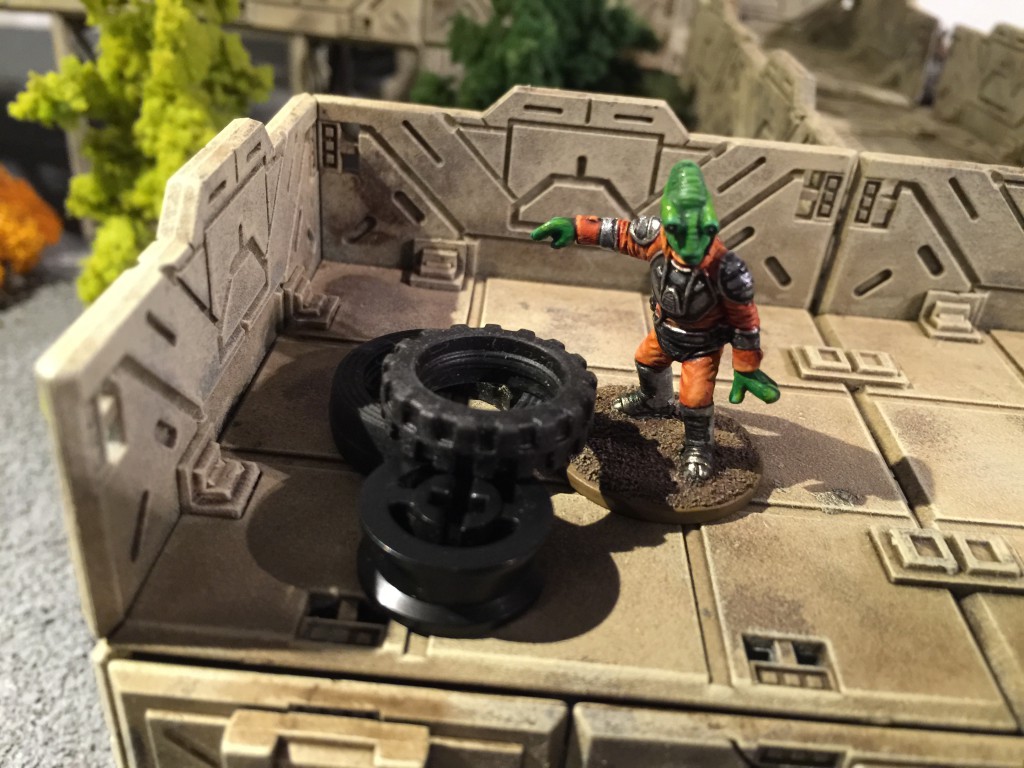 Perched on a roof near the Morley crew was Vuk the snitch. If anyone had seen the animal, he’d be one to know. 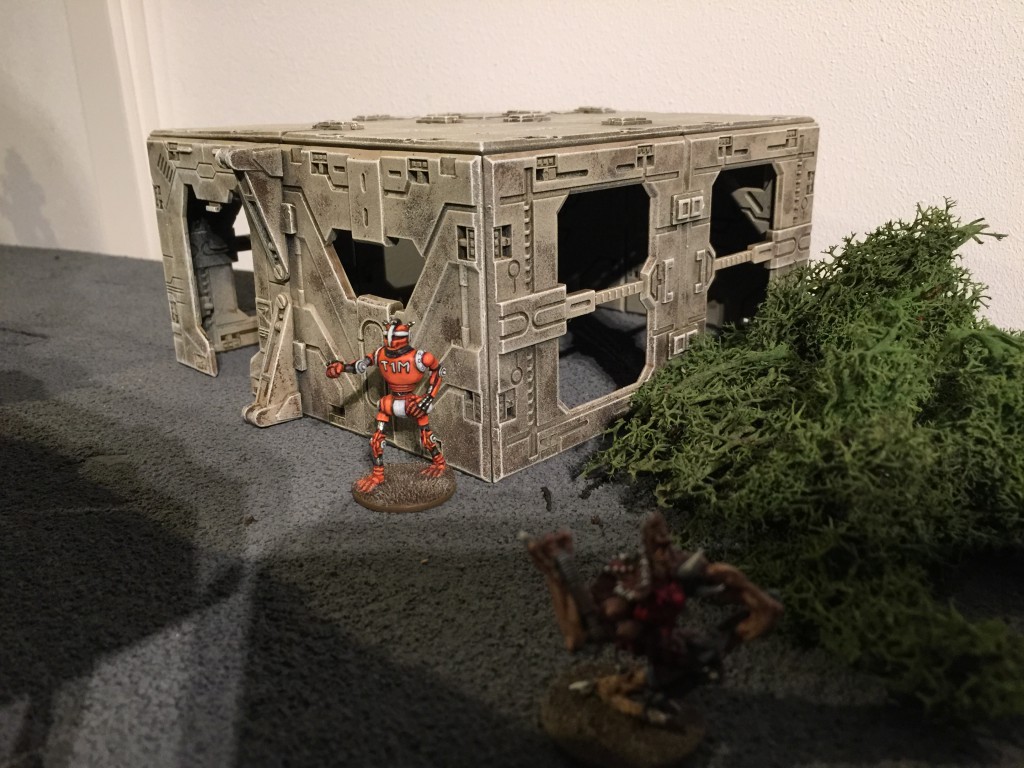 Near the other gang was an old security droid which (if hacked) could help in tracking the badger down. 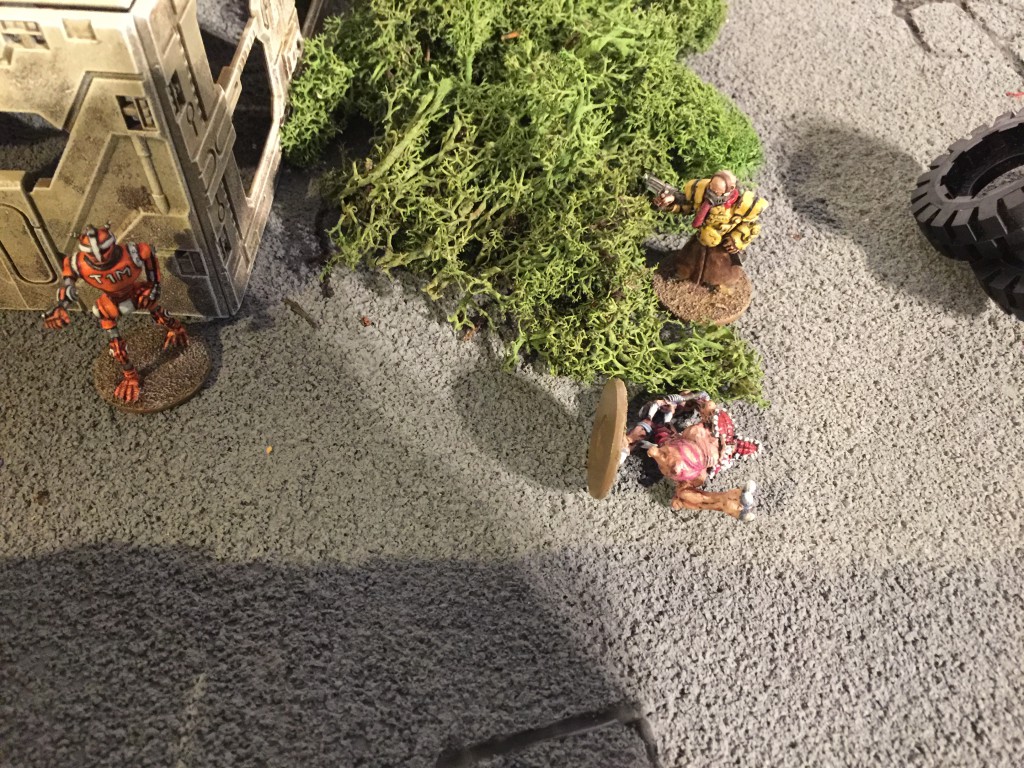 Morley and Stickney wasted no time and in their first turn, they charged forward guns blazing. The nameless horror from the rad wastes only known as “That” fell and was knocked out. 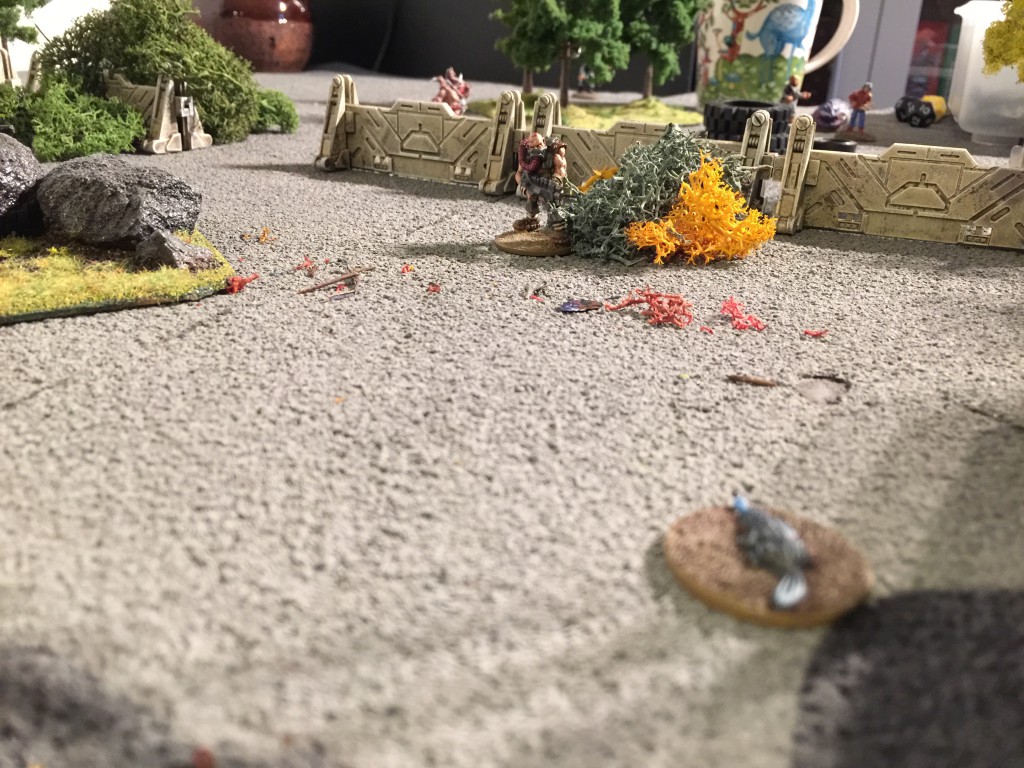 Radovan soon repaid in kind, and Bil the radipus was dispatched of. 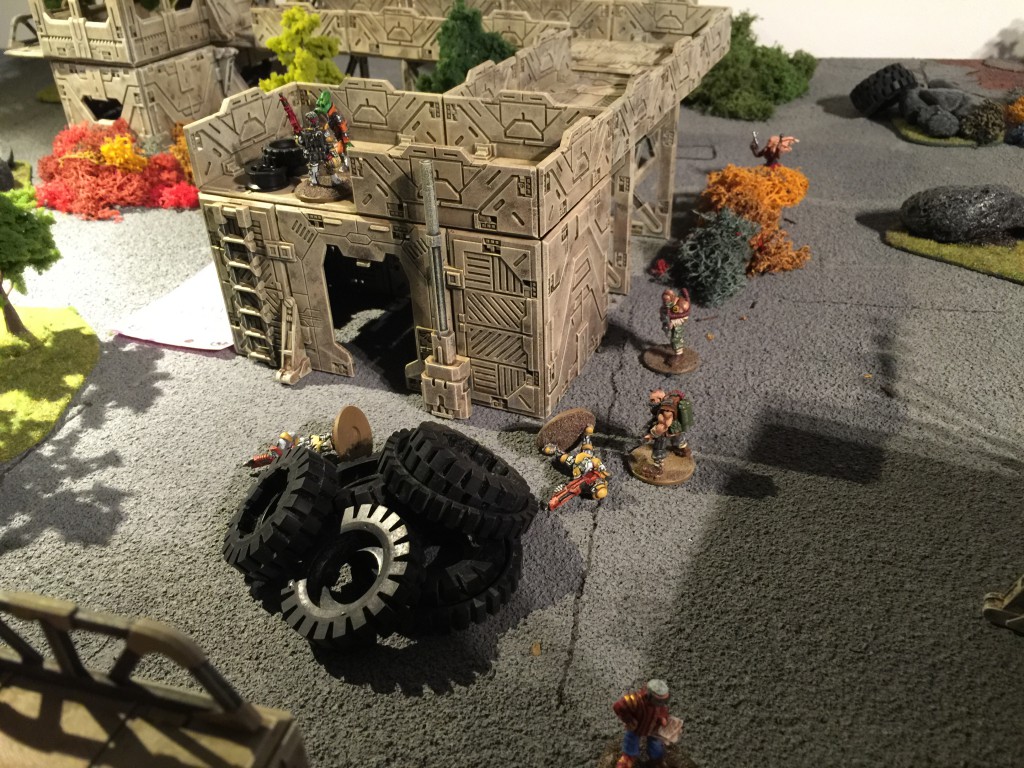 With one plot point secured, the wasteland raiders started applying some pressure on the battle clones, but they held their own long enough to allow Dawleen to climb the ladders and reach Vuk the snitch. 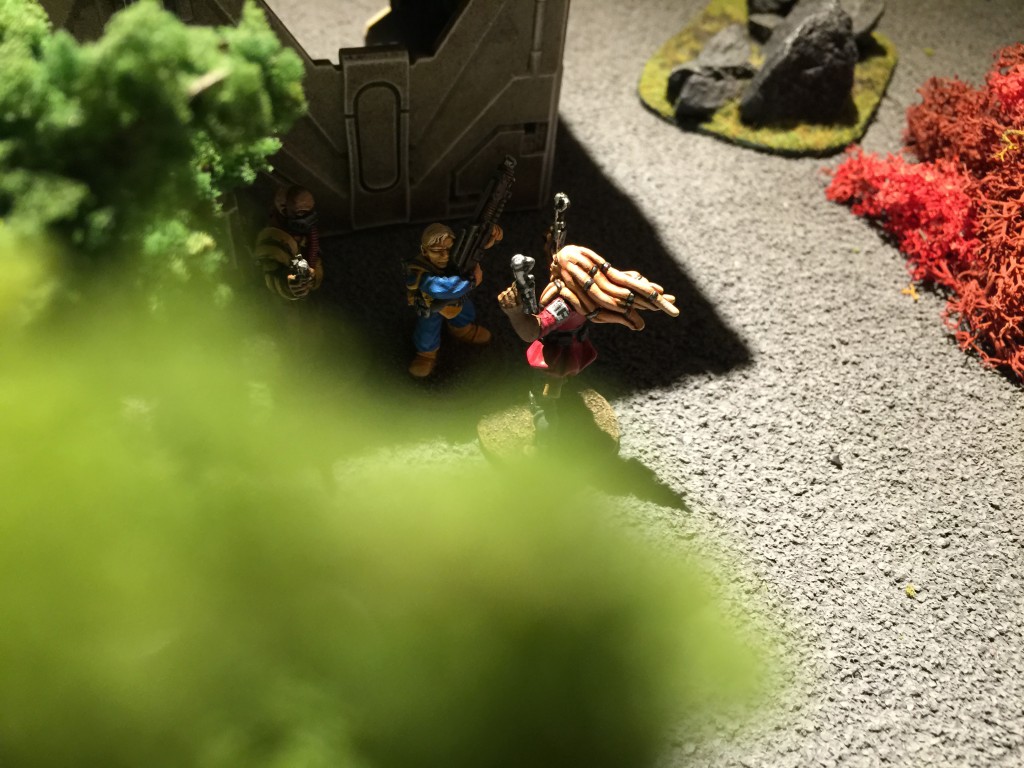 With neither team managing to secure more than one plot point each, and the game coming to a close, Balls charged Morley for a clash between the two leaders. 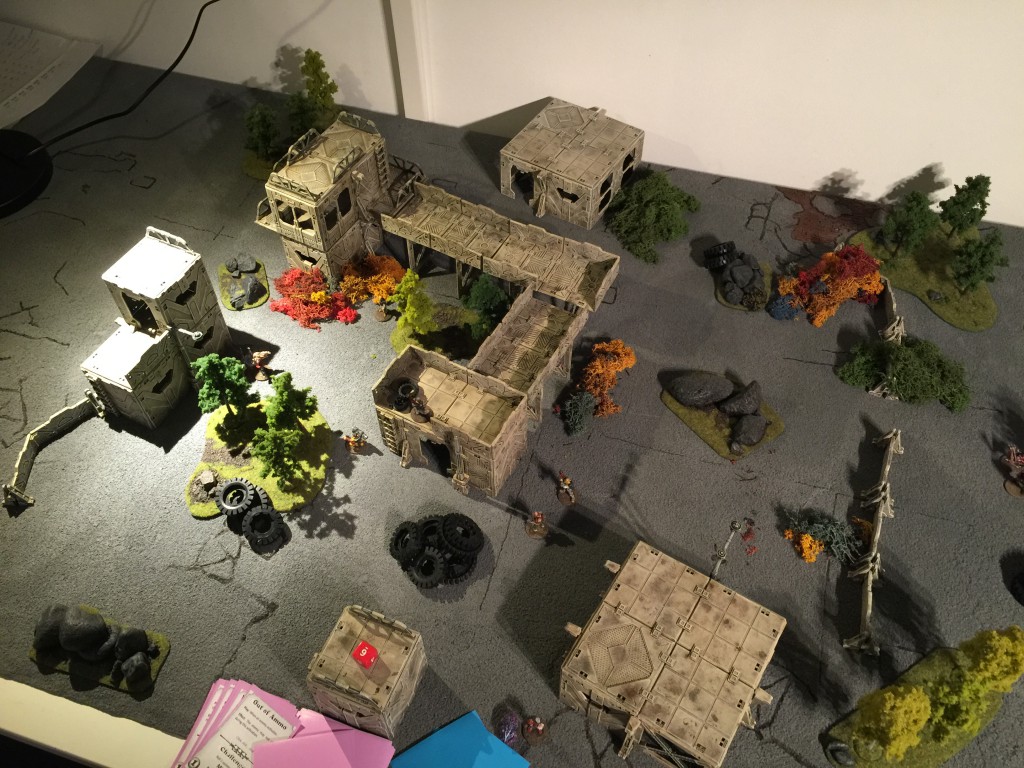 Near the end, the gangsters and smugglers can only look on in dismay as one of the plot points wanders off with the much coveted astro badger! 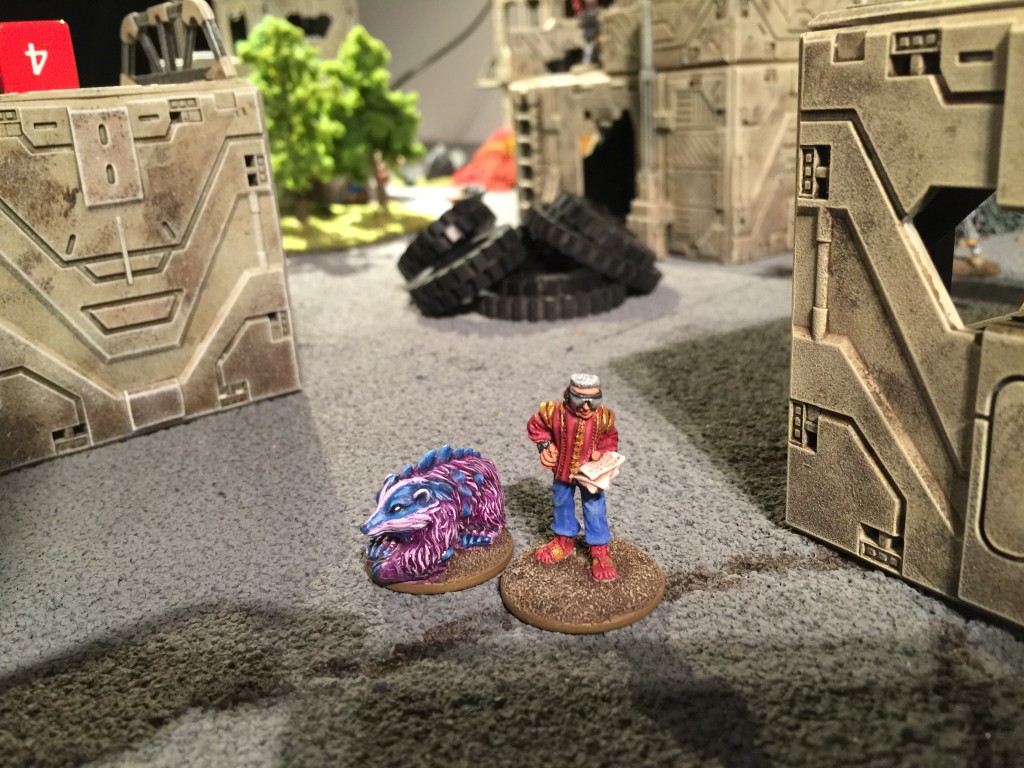 Paulie Papers, ever the opportunist! Only you would be so bold, absconding with the prize right under the nose of the warring factions.

In summary – we had a great time! Plenty of old lead was fondled and oogled, Martin managed to liberate me of some junk… err, treasures I’d been hoarding and an exceedingly even game was enjoyed. Though I did manage to do rather well with the dice for a while, which probably saved my hide more than once. We both lost a single ally and our respective followers. Both of us secured a minor plot point each and neither of us were in a position to try and claim any sort of moral victory over the other. In other words, a perfect introductory game!

Hopefully, we’ll have opportunity to soon revisit McKemmler IV for the next thrilling chapter in the quest for the delectable but ever-elusive astro badger! I have been painting orcs for a rather famous old scenario pack for Warhammer too… it might be we get to play the first scenario from that before we do any more Pulp Alley.