This guy have been primed on the table since the day I decided to do a small scifi project. Thanks to the Scifi Painting Club over at the Lead Adventure forums I finally picked him up for a quick paintjob.

Born and raised in the irradiated first terraforming colonies of McKemmler IV, Mortie is one of few native mutants to actually get out of the system. Now he’s returned to his old home planet to recruit his old hoodlum friends as crew aboard his newly acquired freighter ship. Nicknamed “Balls” by his crew for being a daring fighter and captain. 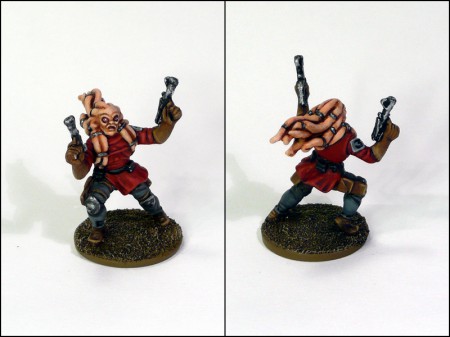 The model is a bendy pre-paint from WOTC’s Star Wars Minis range; Nautolan Soldier. I always thought they’d look fun painted as a human mutant. It was a bit soft in the details, as expected – and I have to say I completely failed on those pistols. Oh well, he’s for gaming and will work just fine on the table. At first, I did his eyes regular “white with a black dot” – and while it really underlined the bugeyed style of him, it felt a bit dull. So I gave the eyes a red wash, which made it a lot better but all of a sudden the contrast was gone so for some reason he got a white dot in the middle of his pupil instead. Almost makes him look too alien for my taste. If I would do such eyes again I would paint the socket black, eyeball white, wash with red, thinned white on the centre of the eyeballs and finish off with a little black pupil in that white centre.

Lately, I’ve been reading Five Parsecs From Home, which looks rather promising. Five Core is the actual ruleset while Five Parsecs is a campaign add-on for playing murder hobos in spaaaace. I hope I’ll be able to get a game or two in during the long Christmas holidays.

In other news, Gareth over at Drums in the Deep have released his dungeon crawling rules Trapdoor (formerly known as Cavern Crawl)! Go check it out, it’s a great rule set for pseudo RPG dungeon crawling.